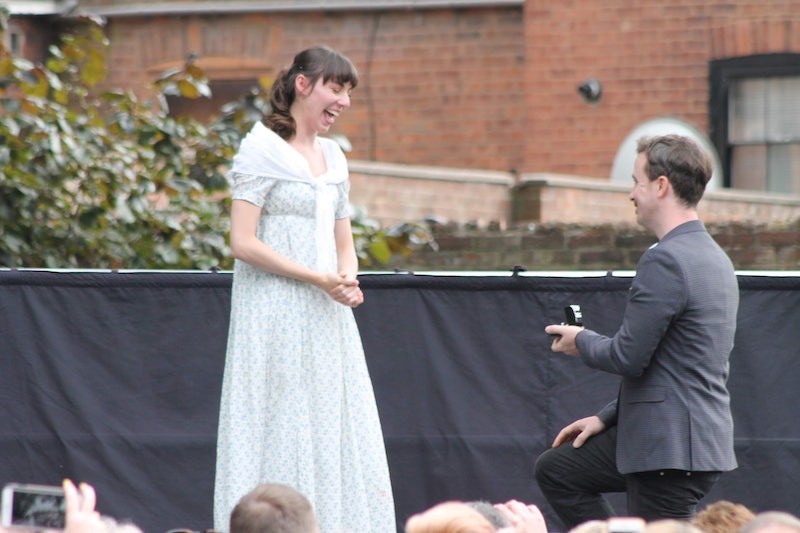 At a recent outdoor performance of Pride and (Quite a Lot of) Prejudice by the Worcester Reperatory Company in England, a very special proposal made its way on stage. Geneviève Lowe, the actress playing Lizzie, fielded a surprise, onstage proposal from her partner, Shane Grant, just after the curtain call. Video of Shane's Pride and Prejudice proposal hit Janeite groups online, leaving many to wonder about the young couple. Bustle reached out to Lowe and Grant via email to talk about their love story, and here's what they had to say.

Like Jane Austen's Elizabeth, Lowe resisted her Mr. Darcy's advancements at the beginning of their relationship. After matching on Tinder, she "made the first move and sent a message complimenting his moustache," but she wasn't sure she wanted to pursue a relationship.

"I had been on so many terrible dates and was starting to think I would be happier remaining single," Lowe tells Bustle. "I was quite reluctant to meet him! I ignored his messages for a while and we so very nearly did not meet!"

Grant persisted, however. "I wasn't going to give up on her that easily," he tells Bustle. "Eventually I managed to secure a date at a nice local pub. Any girl who can appreciate a moustache is a keeper in my book."

As you might expect, Grant's onstage proposal took Lowe by surprise. "I was wondering whether he might propose on our anniversary in the small village pub where we met," she says. "I never expected him to stand up on stage and ask me in front of 350 people!"

Thank goodness a large crowd didn't put Lowe's beau off of his plans to propose. In an interview published July 15, Grant told the Worcester Observer that, "She thinks I was brave for getting up on stage to ask her, I just consider myself lucky that she said yes."

Those 350 people Lowe mentioned were a larger-than-normal crowd for Worcester Rep, in case you're wondering. In a July 14 Twitter post about Grant's proposal, the acting company noted that it "had to borrow extra chairs" to accommodate people who turned out for its final performance of Pride and (Quite a Lot of) Prejudice. Lowe tells Bustle that "Worcester Rep actually broke their box office record in ticket sales just over a week into the production and every night the audience grew," adding: "I can only imagine what Shane must have been thinking when I got home each night and told him how many people were in the audience!"

It shouldn't surprise anyone to know that the couple who got engaged onstage at a Pride and Prejudice play are actual book-lovers in real life. Lowe tells Bustle that Grant is currently reading The Count of Monte Cristo, "his favourite book," aloud to help her "wind down" at night. For his part, Grant says that he has "always loved literature," which he chalks up to "being a graduate of English Literature and an ex-English teacher."

"Perhaps that's why I've always been a bit of a romantic," he adds.

Naturally, Lowe and Grant plan to incorporate bookish themes into their wedding ceremony. Grant says that he and Lowe "are considering having readings from literature/poetry during the ceremony." It remains to be seen what, exactly they will choose, however.

"I think Pride and Prejudice will always have a very special place in my heart," Lowe says, "and it would be nice to try and work it into our day somehow." She admits that she "likes the idea of a woodland wedding," noting that, "Shane suggested it could be Fantastic Mr. Fox-themed which I think could be fun!"

So what's next for Geneviève Lowe and Shane Grant? Lowe is set to star as the title princess in Worcester Rep's winter production of Snow White and the Seven Dwarves, opening in December. "We would both love to work more on our own ideas for writing/directing," she says. "Sometimes it's difficult to find the time, but I think if we can plan a wedding then we definitely have no excuse!"