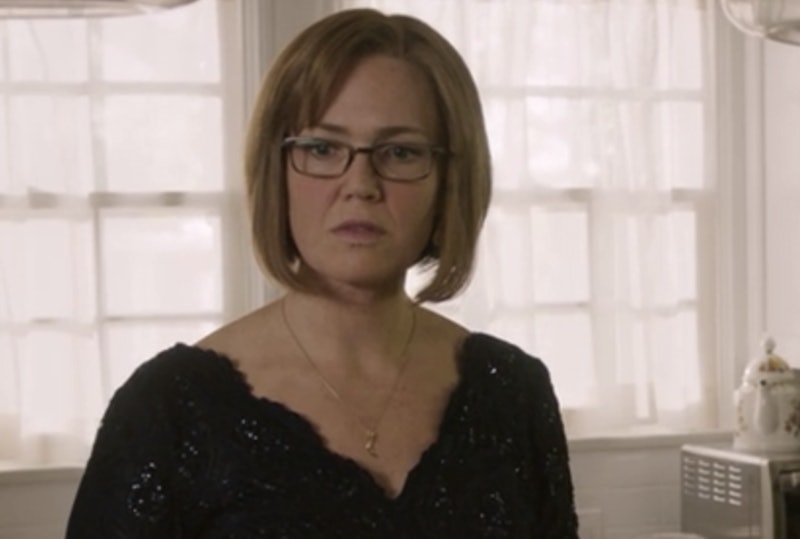 Spoilers ahead for This Is Us Season 4. Fans began theorizing that Rebecca gets Alzheimer's on This Is Us when the Season 3 flash forward showed that she didn't recognize Randall. Now in the Season 4 present timeline, the show seems to be dropping even more hints that Rebecca is losing her memory. During the Nov. 12 episode, Rebecca wouldn't stop taking photos of things, she freaked out when she lost her phone, and she just generally seemed out of sorts. Randall was instantly concerned — and he may be right to be.

At the end of the episode, Rebecca tried to dismiss her odd behavior as her having "senior moments." But Randall was concerned there was more to it. He offered to make her a doctor's appointment, and Rebecca became uncharacteristically upset. Her attitude towards her heath is alarming, because it seems to viewers that Rebecca is also concerned, but that she's ignoring things out of fear.

During the episode, Rebecca took a ton of photos on her phone of seemingly mundane details like all the walls in Randall's office and the furniture in Randall's house. It almost seemed like she was desperate to capture it all because her brain no longer can. When Randall asked her how living in LA was, she couldn't offer any details, but she did want to show him photos of Kate's baby. It's almost as if the photos on her phone help jog her memory for conversations she couldn't otherwise have.

No wonder she got so upset when she misplaced the phone with all her photos on it, which turned out to be a replacement phone for one she recently lost. Uh oh. As O magazine pointed out, this wasn't the first instance of Rebecca forgetting something this season. In an earlier episode, she couldn't remember Spike Jonze's name in a conversation with Kevin. "We did read in The Hollywood Reporter that you're on some shortlist for that new movie with, um..." she said, unable to recall the name.

That alone, isn't necessarily cause for worry, but combined with her behavior in the Nov. 12 episode, it shows a worrisome pattern. That kind of forgetful behavior could be indicative of either dementia or Alzheimer's. According to the AARP, dementia is a catchall term for any memory loss disorder, Alzheimer's being one of them. Previously, Mandy Moore, who plays Rebecca, shot down the theory that her character has Alzheimer's specifically — but maybe she has a different memory loss disease? Moore said to Glamour at the time, "I love how people are sleuths ... I love that! [Alzheimer's is] a good theory. Not true, but I like it."

Meanwhile, creator Dan Fogelman has not confirmed or denied the theories either way. "All I can say about Rebecca's status is, I don't think that your [dementia or Alzheimer's] read is a read that would be unexpected based off the limited amount of material we’ve seen," he said to Entertainment Weekly. "But there are other things that could be going on there as well ... There could be many suspicions as to what is ailing Rebecca, including just aging and being in that place of life. The read of it being Alzheimer's and dementia is not unexpected; it doesn’t mean it's necessarily right."

This Is Us is a show known for surprising its viewers with unexpected plot twists. If the show is trying to make viewers guess dementia or Alzheimer's based on "the limited amount of material we've seen," it make be worth re-evaluating our theories. Not only did Moore flat out tell fans that it wasn't Alzheimer's but Fogelman seems to also be suggesting that the theory is not the right one — even if it seems tat way from the evidence so far.

Fans could have a while to go before Rebecca's diagnosis is confirmed either way. In an interview with Entertainment Weekly at the end of Season 3, Moore said that her character's fate — dementia or otherwise — "will be revealed in the next season or two." So fans may be waiting until Season 5 to know if Rebecca is alright — especially is she continues to refuse to see a doctor and insists that she's fine like she did to Randall in the Nov. 12 episode. But Randall doesn't ever give up on things he's passionate about, so don't expect him to stop trying to check in on his mother's heath. He's not letting his R&R time go without a fight.