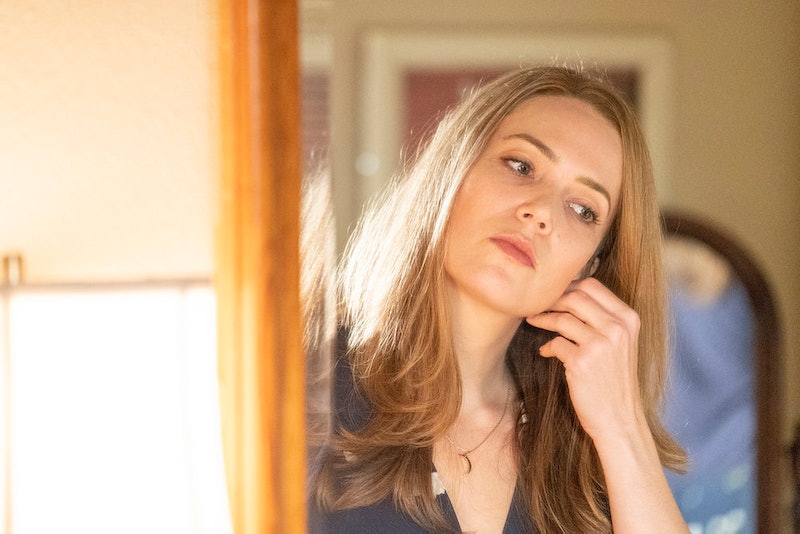 Spoilers ahead for the This Is Us Season 3 finale. Well, This Is Us just did that. Viewers have known for a while that the "her" in the show's flash forward was Rebecca, and everyone's been concerned that the reason everyone was going to see her was because she was deathly ill. Surely the show wouldn't rob us of both Jack and Rebecca, right? Well, depending on what's happening with Rebecca in This Is Us' flash forward, the writers may very well do just that.

In the final moments of the Season 3 finale, the Pearson family gathers at Kevin's house and Randall goes into his mom's room to see her laying in a hospital bed. She's unresponsive to his entry except to nervously fidget with her hands. Randall says to her, "It's Randall. Your son, Randall." His reminding her of who he is will likely make viewers think that Rebecca has Alzheimer's and doesn't recognize her family anymore.

If you think you have Rebecca's mystery illness pegged, though, think again. Mandy Moore, who plays Rebecca, already shot down the Alzheimer's theory to Glamour. "I love how people are sleuths," Moore said. "I love that! That's a good theory. Not true, but I like it." If it's not Alzheimer's, then what is causing Rebecca to not remember Randall? Whatever it is, Moore told Glamour that it made total sense for her character. "My reaction was, 'Oh, Rebecca,'" Moore said of when she found out what happened to future Rebecca. "Dan Fogelman [the creator] is a genius. I was like, 'Yeah. OK. I see that. I believe that. I understand that. Yep.'"

Fogelman is known for his twists and turns that always shock viewers, so for Moore to call his storyline for Rebecca "genius" means that we're not likely to guess the real reason of why Rebecca is as catatonic as she is in the flash forward. But that's not going to stop me from trying to guess. One of my main theories is that she had some sort of brain injury. In the past timeline, Rebecca's car crash made her children worried that she had suffered a brain injury that was going to change her personality and make her forget things. Foreshadowing perhaps?

My other theory is that Rebecca has dealt with some kind of traumatic situation that gave her such severe PTSD that she can't talk or remember things right now. That would explain why Jack's brother Nicky was at her bedside. He experienced PTSD from going to war in Vietnam, and his storyline had last left off with him promising to get some help at the vet center. Maybe he's using what he learned at those meetings to help Rebecca through whatever she's going through now?

She could also have some other kind of illness like dementia, which would also cause her to forget things. As Variety reported, Fogelman said at Paleyfest that Season 4 would focus on Rebecca's father for the first time and he will "be a prominent part of the show." Maybe Rebecca inherited a disease from her father's side that we'll learn about next season? It's also worth noting that Miguel was not in the flash forward, so maybe he has something to do with what happened to Rebecca.

Whatever the answer, it's going to be devastating according to Chrissy Metz, who plays Kate. She told Glamour that she's "still grappling" with what the finale revealed. She elaborated to Popsugar in a way that should make viewers nervous for what's to come.

"When I read the finale, there are a couple of things that happened that I was devastated reading," Metz said. "I'm like, 'What does this mean? Why? Who wrote this? For what?' I was sort of up in arms ... and I don't know if I'm ready. I do not know."

Of course, Metz could have been talking about her reaction to her own storyline. Kate's not in the flash forward, and many suspect she and Toby have split up. But if she was talking about the Rebecca reveal, it sounds like we're in for a heartbreaking Season 4. Then again, it's This Is Us, so what were any of us expecting?