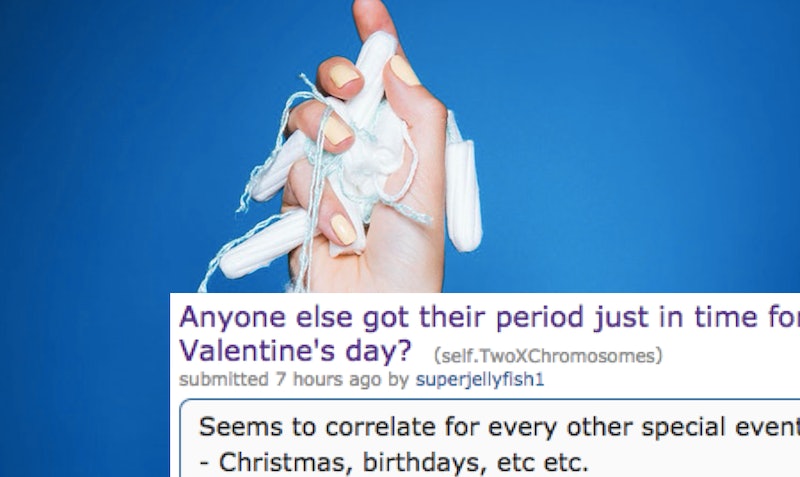 It is a truth universally acknowledged that a person in possession of a uterus must be in want of a really, really bad time to get their period. That’s the focus of a recent post about getting your period on Valentine's Day on the r/TwoXChromosome subreddit, and although neither the post itself nor the thread that follows is particularly lengthy or involved, the whole thing is perhaps one of the most relatable things on the internet right now. Am I saying that because I’m feeling a little crampy right now myself? Maybe. But that’s the point, ultimately — we’ve all been there, and if you’re there right now, odds are there’s someone else who’s there right along with you. It’s… comforting, in a weird sort of way.

The Reddit thread, which was posted by u/superjellyfish1, is short and… well, maybe not sweet, but straight-to-the-point, at least. Titled, “Anyone else got their period just in time for Valentine’s Day,” it reads simply, “Seems to correlate for every other special event — Christmas, birthdays, etc. etc.” before closing out with a brief, “Thank you, uterus!” and an ironic ASCII heart. Others commented in agreement, writing messages like, “Yup! I’m with ya,” and “Worse, I had it for my birthday last week.”

Nor, for that matter, is Reddit the only place that uterus-haversare going right now to commiserate about ill-timed menstruation. On Twitter, folks are expressing how they feel about their current situation:

Commenting on said situation as an ongoing, multi-year trend:

And cracking jokes about it, because sometimes, the only way to get through something unpleasant is to laugh at it:

To be clear, periods are not something we need to be ashamed of, despite our culture’s super weird stigma against menstruation. Most people with uteruses will have an estimated 450 periods during the course of their lifetimes, according to the Association of Reproductive Health Professionals; menstruation is just a fact of life for about half the people on the planet. What’s more, periods are indicative of some of the truly amazing things our bodies are capable of doing — like, y’know, literally growing new humans. For these reasons and many, many, more, I would argue that our society’s continued insistence that that periods should be hidden away and never mentioned or spoken about — in fact, gee, wouldn’t it just be better if we pretended they never happened at all? — is one of the most nonsensical ideas ever to emerge from within our tiny little human brains. Have your period. Do not be ashamed of it. Don’t let anyone else treat it as something shameful, either. Break that stigma.

However, the fact remains that periods, as both amazing and commonplace as they may be (yes, at the same time), aren’t necessarily fun. Cramps suck, you might get achy, you’ll probably poop more (or else you’ll get constipated instead), you’re more prone to vaginal bacteria or infections, and although I would argue that periods aren’t inherently gross —or at least, they’re no more gross than any of our other regular bodily functions — they can get messy sometimes, which is not usually a delight to clean up.

Plus, dealing with all that aforementioned stigma can wear you down after a while — and when you add it to the bizarre amounts of pressure our culture also puts Valentine’s Day in particular, as well as on dating, relationships, and sex in general, getting your period on Valentine’s Day can feel kind of like the universe is kicking you while you’re down.

The same is true of getting your period on other holidays or occasions, too. One Redditor in the original thread wrote about having gotten their period on their wedding night, for example:

Not ideal, especially given that the vast majority of people are likely to be stressed about more than enough wedding-related items as it is.

And, I mean, even just having your period while you’re shopping for whatever you’re going to wear at your wedding is also not ideal:

Birthdays are not immune to Bleeding During A Major Event Syndrome, either. YouTuber and all-round superperson Lilly Singh once tweeted this little gem:

This Twitter user got snowbound while menstruating on the big day:

And this person summed it all up in a way that many probably relate to:

Nor is the phenomenon limited to single-day events — a different r/TwoXChromosomes thread from 2012 asking people, “Do you find your period always comes at the worst times?” included an impressive number of responses that zeroed in on menstruating while traveling:

To be fair, there actually is a scientific reason that our periods get a little messed up when we travel; according to the Huffington Post everything from anxiety about the journey to the way our eating habits change while we’re away to the effect traveling has on our sleep quality can stress your body out, which can in turn throw our cycles out of whack. “When you alter the circadian rhythm, your body perceives that as a stressor,” OB/GYN Dr. Kristyn Brandi told the outlet in 2017. “Daily hormone schedules are altered, leading to changes in hormones and thus changes in periods.”

That doesn’t make it any less of a pain in the butt to deal with, of course. But you know what does kind of help? Knowing that you’re not alone. As all of these Reddit threads and tweets demonstrate, nearly everyone who menstruates has gotten their period at an inopportune time. So you know what? Even if you have your period on Valentine’s Day, do whatever you want. Find you an enthusiastically consenting partner and have period sex:

Here is a life pro tip for you if that's what you decide to do:

Or don’t have sex if you don’t feel like it:

Or whatever. You can also just straight-up ignore Valentine's Day. And no matter what your situation might be take comfort in the knowledge that there are tons of other people out there in the exact same boat you are.

We know your feels. Because we have them, too.