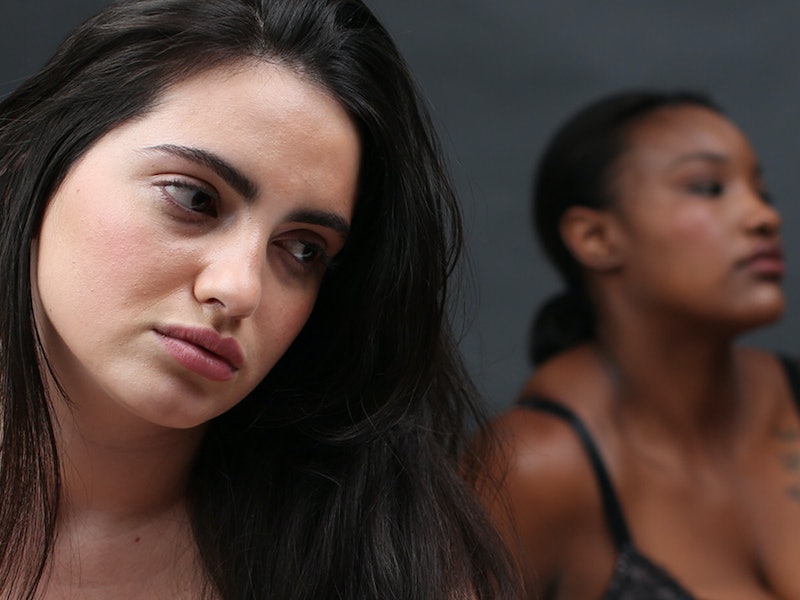 Between the burden of finding the perfect gift for your boo, the anxiety of finding a Valentine if you're single, and the pressure to spread love to people you don't even like, there are plenty of ways Valentine's Day is toxic AF. If you don't want to buy into the societal pressure of this heart-shaped holiday, it might help think of it another way — Wednesday. In the age of everyone living out loud online, it's almost impossible to avoid having Valentine's Day shoved down your throat, which actually makes a strong case for a February social-media detox.

"Valentine’s Day plans like dinners, concerts, or events are usually more public — talked about in conversation and even shared on social media. Seeing and hearing about others’ sometimes embellished or idealized accounts of their celebrations makes it difficult to avoid comparing them to our own," Jonathan Fader Ph.D. wrote on Psychology Today. "These comparisons can lead to dissatisfaction about our own way of celebrating, even if it was perfectly enjoyable and satisfying in the moment."

Before and after Valentine's Day is also when a lot of couples head for splitsville. CNN reported that a 2010 study of Facebook relationship statuses found that the highest rate of breakups occur post Valentine's Day, perhaps because of all of those unmet expectations. On the other hand, if you're single, you might feel pressured to swipe yourself a date because of FOMO. Trust me, forced coupling for the wrong reasons almost never ends well. If you're not feeling all bright and shiny about everything Cupid, then you're going to love these eight reasons why Valentine's Day is actually toxic AF, and why you're empowered to avoid it.

2. It Creates Stress You Don't Need

Between the holidays, the winter doldrums, and recovering from January — the month of eleventy-million days — you're likely already stressed AF by the time Valentine's Day comes around. Whether your single or coupled, those dreaded V-Day obligations can create a lot of unnecessary stress that you definitely don't need. Similar to New Year's Eve, you don't have to succumb to the pressure of Valentine's Day. It's not only OK, but it can also be empowering to completely boycott this forced day of love.

3. It Can Cause Anxiety

Valentine's Day is the one day of the year that you're expected to be better looking, a better lover, a more fascinating conversationalist, the buyer of the perfect gift, and the planner of the once-in-a-lifetime experience. Anxious yet? Valentine's Day is basically setting you up to fail, which can even lead to awkward sex among couples who generally don't have any problems in the bedroom.

What's more, the overt objectification of women in almost every underwear ad leading up to Valentine's Day can make you feel pressured to don lingerie you'd never normally wear because that's what society is telling you your partner wants. Combine these two pressures and you could end up with a really bad sex sandwich.

4. It Can Trigger Depressive Thoughts

If you're already battling anxiety and depression, Valentine's Day can be a huge trigger, especially if you're single and you're surrounded by what seems like the world's happiest couples. With everyone curating their social media feeds to show the best version of themselves, versus who they really are, it might feel like every single person on the planet but you has found their twin flame. But it's not true.

"Being single on Valentine’s Day may have you thinking you’re unworthy of love or unlovable. You may worry that you’ll never find someone to love or someone who will love you. If you’re in an unhappy relationship you may feel the same way," Linda Walter, LCSW, wrote for Psychology Today. "Just try not to compare yourself with the people you see on your television or movie screen. [...] Do you really know anyone who has a relationship that’s like those portrayed in the movies or on commercials?"

5. It Pressures You To Get Spendy

If your bank account is in the single digits after the holidays, the pressure to get your bae the biggest, best gift in the history of the world can throw you into a financial fire storm that you might spend the rest of the year trying to recover from. ABC News reported that the National Retail Federation released a study that revealed people spend an average of almost $137 on Valentine's Day gifts. That's a lot of money to throw down for a Wednesday. Just sayin'.

6. It Creates An Unrealistic Fantasy

If you're partner isn't the kind of person who showers you with lavish gifts and romantic dinners the other 364 days of the year, expecting that person to turn into some kind of rom-com hero simply because it's Feb. 14 is not realistic. There isn't actually an angel that flies around and shoots people with love arrows, so any notion that you or your partner will suddenly become different people on Valentine's Day is more likely to lead to an argument than a love fest.

"Shows like The Bachelor and store displays seem to imply that everyone believes that romance means hearts and flowers and mushy romance on February 14. Some people simply aren’t romantic that way," Marie Hartwell-Walker, Ed.D. wrote on Psych Central. "If you’re with someone who just doesn’t get it — and especially if you do — it’s not necessarily personal. It may be that your guy or gal is preoccupied, has bad memories associated with the day, or doesn’t philosophically go along with a holiday that was made big by the card companies."

If the above reasons aren't proof enough that Valentine's Day is a toxic holiday, consider this: The American University in Cairo noted that Valentine's Day emphasizes outdated gender norms by putting pressure on men to make a grand romantic gesture, and women to prepare to receive the perfect gift. Basically, it's every sexist romantic comedy you've ever seen.

"Ads generally show that women care a lot about Valentine’s Day, while men are prone to forgetting this holiday, inevitably angering their partner, which requires them to make a grand and expensive gesture," Ian Morrison, assistant professor of sociology, told The American University in Cairo. "Thus, the commercialization of the holiday reinforces and relies on a traditional, heteronormative understanding of gender roles and characteristics."

8. It Reinforces The Patriarchy

If you've never explored the historical context behind Valentine's Day, get ready to be horrified. It's actually part of patriarchal conditioning that permeates our culture. "[It] is mainly about fertility and the promise of offspring, which secures the society and the city-state," Vassiliki Kotini, assistant professor of English and comparative literature, told The American University in Cairo. "This is because offspring means citizens and, in case of male offspring, it means soldiers. It also means continuity of the family name and familial wealth that will be passed on to the new generation."

If there were ever reason to shun Valentine's Day, this is the best one I have ever heard. Instead, just celebrate Wednesday with some Nasty Woman Wine, and gather your besties to help out the resistance by doing your part to dismantle our toxic culture. Because, Valentine's Day is actually pretty toxic.