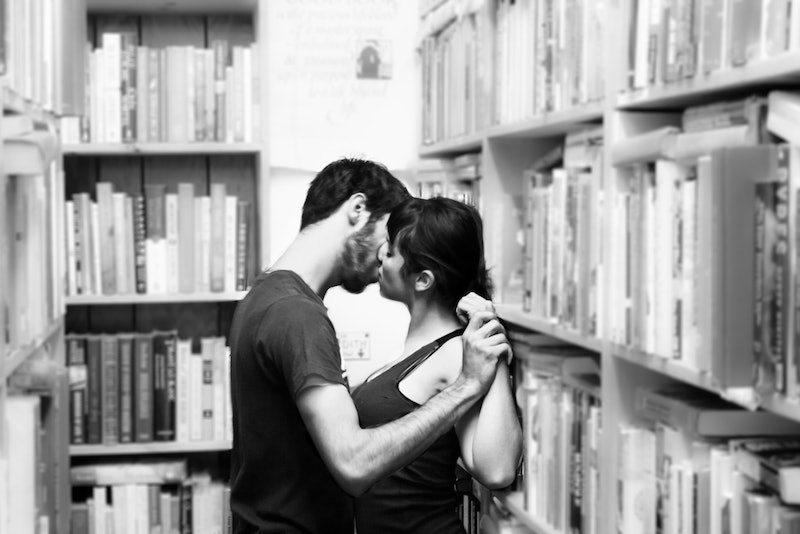 I’m a huge fan of This American Life, and a recent episode, "Birds & Bees", went into a college classroom where freshmen were learning about consent — specifically, enthusiastic consent. For those of you who haven’t heard the term, enthusiastic consent is getting a clear, verbal “yes” for each new “level” of sexual activity. So if you’re moving it from kissing to boob action or upstairs to down, you have to ask first. With your words. Out loud.

While I have qualms with the fact that teens aren’t learning about this extremely important issue until way after most of them have started having sex, I’m glad that colleges are at least trying to do something about the major issue of sexual assault. However, if this episode is an accurate portrayal of what’s going on in college classrooms, they’re falling very, very short of getting the message across.

The thing that struck reporter Chana Joffe-Walt the most about the workshops was the fact that the students seemed really hung up on how asking for enthusiastic consent would “ruin the mood.” They didn’t understand how it could be anything other than an interruption of the “flow,” something that’s clearly important to young people who are just figuring out exactly how to get each other into bed.

I wanted to jump through my computer speakers and yell at both the instructor and Joffe-Walt, who dismissed the student’s concerns out of hand.

But here’s the thing: If we want teenage boys (because, let’s be real, we’re not really as concerned about the girls asking for consent, although I firmly believe that’s something else that needs to change) to start seeking out enthusiastic consent at every step of the hookup process, we have to give them clear methods for doing so — and we can’t dismiss their concerns about “mood.” These boys are still fumbling through what it means to be a sexual adult and they want guidance on everything from how to seduce women to how to get a girl to like them and, yes, how to not rape them.

So let’s talk about consent! Not the awkward, weird, mood-ruining consent that those freshmen were taught in that workshop. No one likes the idea of having to stop making out and say, “Can I kiss? Are you OK with my hand on your leg? Do you like when I touch your hair?” like some automaton every time something new is introduced. Nothing about that model is appealing; sorry, well-meaning workshop leaders. Instead, there are super hot, super sexy ways that both men and women can check in with their partners to ensure that everyone is on the same page all the way through.

This is one lesson that straight folks should definitely take from gay men: Talk it out before you even get into it! Because what’s going to go where is not immediately obvious from anatomy when it’s two guys getting together, gay guys have to talk out what they’re going to do and what they want to do beforehand. Straight couples should totally take that model and apply it to their own sexual encounters.

Turn It Into Foreplay

If you and a partner have already established that you’re interested in seeing each other naked, you can make asking for consent into a foreplay game. Murmuring “Can I take your shirt off? Can I kiss you here?” each step of the way prolongs what can often be a too-quick process. Asking questions not only ensures that your partner is into it but also draws it out, making you both want it even more.

And, once again, you can ask in a sexy way. Asking for the next thing doesn’t mean you have to stop doing the last thing, right? Rub up on each other, get your sexiest voice going, and ask away!

Even once you’re past the foreplay stage of things, it can still be super hot to turn asking for consent into dirty talk. “I want to suck on your nipple. Do you want it too, baby?”

Ask “Do you like it when I ___?” when you want to introduce something new. Throw in some dirty words and it’s hard to imagine that your partner’s “Yes!” won’t be full throated and absolutely enthusiastic.

Always pay attention to what your partner’s body is telling you, in addition to what they’re saying with their words. Women especially are not empowered in our society to ask for what they want, so it may be hard for them to say, “Yup, do this and this and not that.” If someone is saying yes with their words but their body language is saying “Maybe?” that’s a signal that it’s time to step back and, yeah, maybe ruin the mood a little bit. Think about this way: Wouldn’t you much rather ruin the mood that night than potentially ruin someone’s life?

Enthusiastic consent. It can be hella sexy. Go get it.

Thanks to Jake Smith for help with this article.