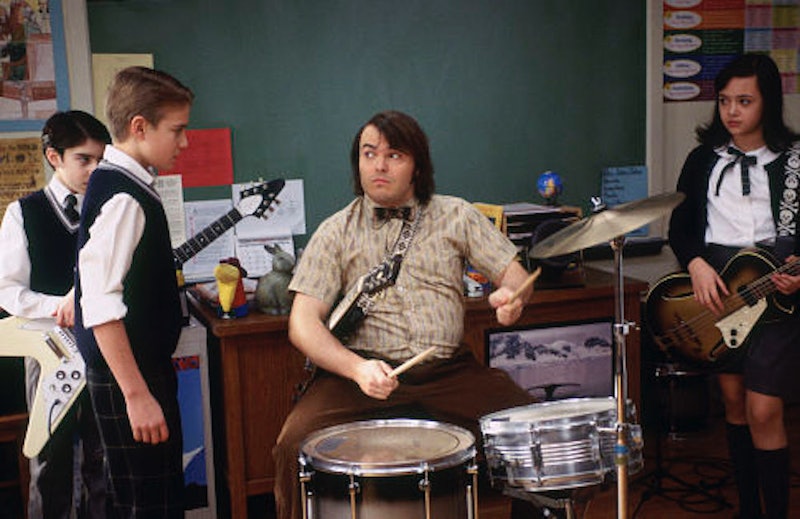 This photo may "test your head and your mind and your brain," too. In honor of the movie's 15-year anniversary, the School of Rock kids had a reunion that's bound to make everyone feel equal parts giddy and old. As the photo shows, these little kids aren't actually so little anymore. Unfortunately, what these images can't tell us is whether Mr. Schneebly's students still rock.

This new year's eve, Caitlin Hale, who played Marta, posted a photo of a few of the all grown up kids from School Of Rock hanging out for the holiday and most likely, living hardcore. "Seven School of Rockstars walk into a bar..." Hale captioned the shot, which featured Angelo Massagli (Frankie), Becca Brown (Katie) Aleisha Allen (Alicia), James Hosey (Marco), Zach Infante (Gordon), and Brian Falduto, who played Billy better known as "Fancy Pants."

Fans of the classic early 2000s movie will remember when Billy said to Mr. Schneebly, "You're tacky and I hate you." And, while some might have agreed at that point in the film, there's no denying that this photo is definitely not tacky and I don't hate it. But, Brown probably put it best in her Instagram caption for a shot of the band hanging out in a New York City bar. (Yes, they are all now of legal drinking age.) "We had a mini reunion and it rocked," she wrote.

Of course, there were some band members missing from this get together Kevin Clark as drummer Freddy, Joey Gaydos Jr. as lead guitarist Zack, and most notably Miranda Cosgrove, who played Summer, the band's manager. Don't worry, though, Cosgrove has said she still stays in touch with her School of Rock co-stars. "I’m friends with all of them, but I don’t really see them that often," she told Bustle in 2016. The movie, which cast mostly non-actors for the kids parts, gave her friends around the country, so not everyone is always free for a meet up.

"It’s kind of cool, because when I went on tour or when I visit other states, there’s pretty much one kid from the movie in every state," Cosgrove, who grew up in L.A., said. "So whenever I go visit somewhere, I have a built-in friend to meet up with." So, maybe she'll be there for the next reunion, whenever that may be.

As for the School of Rock kids who did make the reunion, they're now in their late 20s and most are still dabbling in music, according to BuzzFeed. Infante is performing on Broadway, Hosey is making his own music, and Falduto is a singer/songwriter and a life coach for the LGBTQ+ community. Brown is still acting and actually met up with Dewey Finn himself, Jack Black back in November. "Caught up with an old friend tonight," she wrote, sharing a photo of the two of them on Instagram.

Brown's also still making music, and in fact, is asking fans for help to make her new record, which will be a mix of music and comedy. "Please consider dropping some dollars so I can be the comedy version of Ariana Grande and live out my pop star F A N T A S Y," Brown wrote on her GoFundMe page.

Perhaps, though, the most heartening news to come from this reunion is that Hale and Massagli are dating. According to E!, the two started dating in 2018 and are still going strong, which is just another great thing this movie gave us.

After seeing all of these photos, you might start wishing for a School of Rock 2. So, what do you say Jack Black, you in?