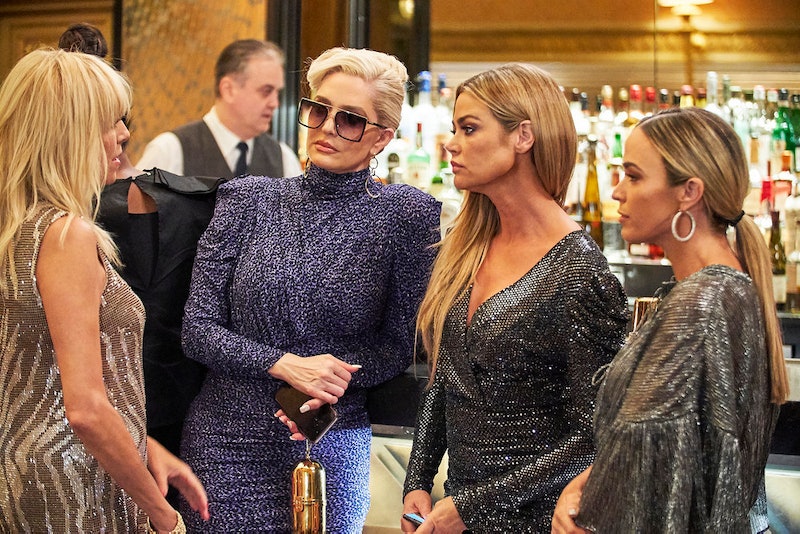 Brandi Glanville is back on The Real Housewives of Beverly Hills, and she isn't wasting any time causing major trouble. The new RHOBH mid-season trailer finally teases those Denise Richards and Brandi Glanville rumors, and they're even more juicy than fans might have heard. In fact, the remainder of Season 10 seems to be almost entirely centered around the alleged drama.

In January 2020, multiple outlets reported that Denise and Brandi had an alleged secret affair — though Denise has denied the reports. In the trailer, this all comes out when, at a dinner with current Housewives Kyle Richards, Dorit Kemsley, Lisa Rinna, and Erika Jayne (plus OG Housewife Kim Richards), Brandi claims that Denise and her husband Aaron Phypers have "this whole open thing," seemingly implying an open relationship, which led to their alleged affair.

"I f*cked her, woke up the next morning, she said, 'Aaron can never know this. He'll kill me,'" Brandi claims in the trailer. She can also be seen slapping Denise's derrière in a brief scene, seemingly much to Denise's annoyance. However, Denise strongly denies Brandi's claim. When she finds out what Brandi said at a separate dinner, she seemingly starts to tear up. "What the f*ck?," she responds, emphatically telling the ladies that "it's not true!"

The Housewives, meanwhile, are absolutely stunned by the allegations, with the trailer not making it clear on where they stand — with the exception of Dorit, who says she believes Denise. However, Denise is not taking the allegations lightly, demanding that Bravo not air the story in the trailer. "Bravo has a choice," she's heard saying. "If they ever want me to be on this show, they need to cut that."

Denise's representative denied rumors of an affair with Brandi back in January, and the star has maintained her stance ever since, telling Entertainment Tonight in May that the allegations made for a very tough season. "I was very much caught off guard, and the subject matter that seems to be in all the tabloids of late is... I think it's kind of disgusting that they even talk about it," she said. "But that's something they choose to, and I've had worse things said so I can rise above it."