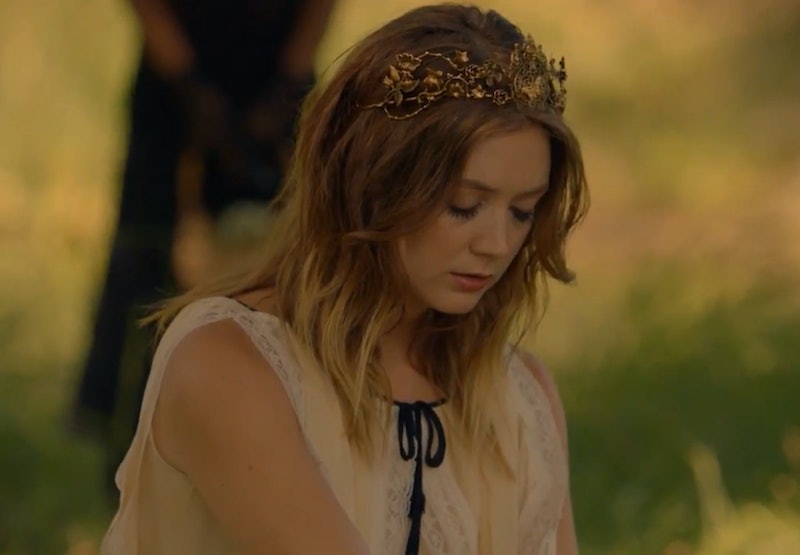 Spoilers ahead for American Horror Story Season 8, Episode 5. This season of American Horror Story is no doubt a melting pot of seasons past — fans have long known that Season 8 merges the universes of Murder House and Coven. But as of the Oct. 10 episode, those aren't the only previous seasons that have come into play: AHS: Apocalypse featured a Roanoke aster egg that could tk.

In "Boy Wonder," Michael Langdon is tasked with performing the Seven Wonders to determine if he really is destined to dethrone Cordelia, reigning Supreme, and become the warlocks' Alpha. Of course, this is all just part of his larger scheme: He tells his adoptive mother that the witches and warlocks are the only things standing in his way, and if he can trick them into thinking he's the Alpha and kill them off, he can proceed with whatever evil plan he's plotting.

Cordelia, meanwhile, is onto him, but she's playing along for now. She decrees that Michael's Seven Wonders test must be conducted at the rise of the Blood Moon — a huge plot point from Roanoke. In that season, the days leading up to the Blood Moon were when spirits haunting the farmhouse could cross over and wreak havoc on the living. And Roanoke had its own tie to Coven, too: Lady Gaga's character of Scathach was revealed to be the original Supreme, which could be important here.

Some fans have begun speculating that Mallory (Billie Lourd), one of the witches recently brought back from the dead, could be a descendant of Scathach. "We know she would have sex with men and got pregnant. She'd give the boys away, but kept the girls. I think Scathach is Mallory's mother. That is why Mallory is so powerful," Reddit user Supreme000 wrote in a recent post.

Others have also pointed out that the image that flashes behind Billie Lourd's name in the opening credits of Apocalypse seems to be of the original witch, or of a historic witch burning at the stake. This could hint that even if she's not a direct descendant, perhaps Mallory is somehow being guided by the spirit of Scathach in order to ultimately defeat Michael. "Maybe Scathach transferred herself [into] a mortal body after the area of the Roanoke colony was burned down," theorized another Reddit user, SevensAddams.

Plus, Mallory noted earlier in the season that she's a descendent of the original Salem witches, who could be tied to Scathach, too. Whatever the case, something is definitely going on with Mallory, as she seems to be much more powerful than a typical witch.

Though some have theorized she's a fallen angel — making her a worthy foil to Michael, the antichrist — right now, the mentions of the Blood Moon and her long line of witch ancestors seem too purposeful to be coincidence. If Scathach was the original Supreme, her story will likely tie back into the Coven witches at some point, and with the Roanoke Easter eggs dropped in this week's episode, it could be happening soon.