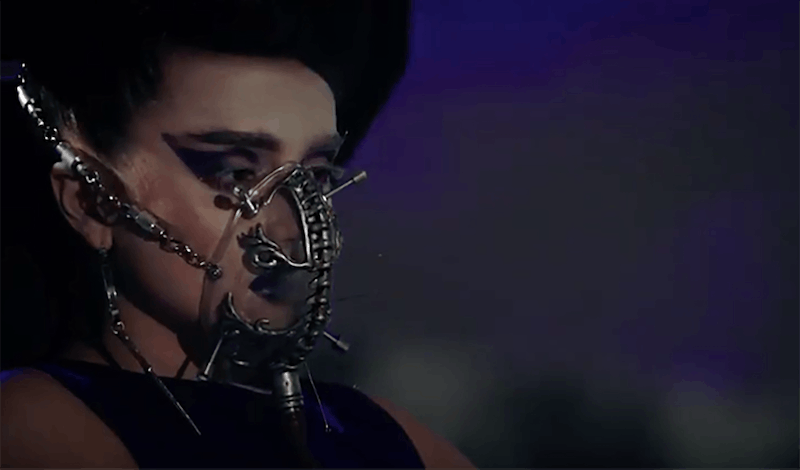 Another day means yet another new American Horror Story: Apocalypse teaser has debuted, but this time it could be teasing a lot more than just the whole "end of days" symbolism. In the latest clip released by FX, two women are shown wearing what appears to be oxygen masks, but as the two of them breathe deeply into the devices, it becomes clear that the woman on the left is actually sucking the life out of the woman on the left. However, it's the women themselves that have caught fans' attention, leaving many fans wondering: will Lady Gaga be in AHS: Apocalypse? (Bustle reached out to FX and Lady Gaga's rep for comment, but has not yet heard back)

The revitalized woman at the end of the promo does share some shocking characteristics with the beloved singer. But is that really her, and if so, what role will she play throughout Season 8?

In true Ryan Murphy fashion, these promos usually leave us with more questions than answers, but many fans are convinced that the masked woman is actually Mamma Monster herself, who starred as the Countess in American Horror Story: Hotel as well as Scathach from Roanoke. Since the Murder House and Coven crossover season was first announced, several casting announcements have been made about who will return. The Harmon family will be making a cameo, as will Jessica Lange as Constance Langdon, along with several familiar witches from Coven. The list goes on and on, but one name that has yet to come up is Lady Gaga herself. Could this promo be Murphy's way of hinting at her return?

Gaga may not have appeared in either season of Murder House or Coven, however, both of her characters from Hotel and Roanoke had significant connections to those specific seasons. At one point during Season 5, it was revealed that the Countess had visited Murder House and served as a patient of Charles Montgomery. Meanwhile, her character on Roanoke was revealed to be the original Supreme, giving a clear nod to Coven. It would be easy to see either of these characters somehow fitting into the Season 8 crossover.

There has yet to be any confirmation that Gaga will appear (or that this is her in the video), but it's definitely a theory that fans are taking and running with:

Fans may have to wait until American Horror Story returns on Wednesday, Sept. 12 before getting a definitive answer in regards to Lady Gaga's potential involvement, but it's certainly not out of the realm of possibility. Many fans were disappointed when she neglected to pop up throughout the show's seventh season, but that doesn't mean that she never planned on coming back to the show ever again. This is a season full of reunions, so it would be fitting for her to assume her rightful place among the many, many alums.

Maybe it's all in our heads. Maybe Murphy is just trying to mess with our minds. (Wouldn't be the first time.) But if not, this latest teaser could be the most telling of all the ones that have come before it.