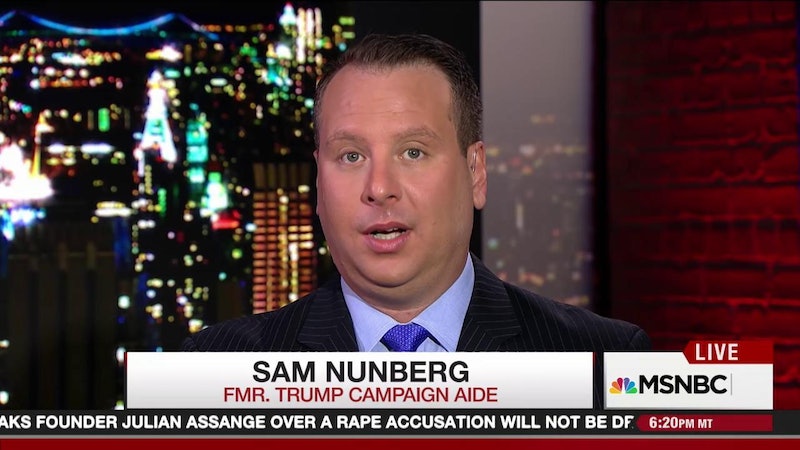 After hours of outlandish remarks that left observers speechless Monday, former Donald Trump aide Sam Nunberg agreed to cooperate with Robert Mueller of the FBI. It wasn't always this way: Nunberg rattled his viewers and listeners earlier that day with a series of bizarre, haphazard, and even sexist remarks about the White House. On both television and radio, Nunberg left a variety of shocking and dramatic proclamations, calling White House press secretary Sarah Huckabee Sanders a "fat slob."

After those antics, Nunberg seems to have calmed down. On Monday night, Nunberg told Associated Press that he will cooperate with Mueller, who is spearheading a special counsel to investigate possible collusion between Trump's presidential campaign and Russia in 2016. Nunberg said, "I'm going to end up cooperating with them."

That said, Nunberg's acceptance comes with a small but critical caveat: he told AP that he would comply if Mueller changed and reduced the "scope" of his investigation involving him. "I'm happy if the scope changes and if they send me a subpoena that doesn't include Carter Page."

Page, who previously worked as a foreign policy adviser to Trump, was accused by Nunberg of collaborating with Russia during an interview with CNN's Jake Tapper. Page has denied any collusion. While speaking with AP on Monday night, Nunberg said that if Page is out of the counsel's scope, he might just comply. He said he and Page never talked before but Nunberg did call Page a "scumbag" and added, "I think that Carter Page is a weird dude. I don't think he should have been involved in that campaign."

Nunberg initially won media's attention after he said he would not comply with Mueller's subpoena but ever since then, which was only a few hours ago, the former Trump communications adviser has changed his mind. For the record, Nunberg initially said "screw that" to the notion of complying. It's worth mentioning that while Nunberg can, technically, refuse to comply with Mueller's grand jury subpoena, he would possibly risk getting arrested. Political commentator and TV talk show host Rachel Maddow pointed this out on Monday night.

While people listening to Nunberg speak on-air found him unprofessional, one particular person pointed out that Nunberg's initial claim that he won't cooperate would be a terrible mistake on his part. John Dean, who worked under former president Richard Nixon's administration as a counsel, said that Nunberg was overestimating his power to not comply. "This is not Mr. Nunberg’s decision, and he will be in criminal contempt for refusing to show up. He can take the Fifth Amendment. But he can’t tell the [Grand] Jury to get lost. He’s going to lose this fight."

It wasn't just CNN where Nunberg had a meltdown. On MSNBC, Nunberg told Katy Tur that he wasn't afraid of the "really, really funny" consequences for refusing to comply. On Monday night, he said, "I think it would be really, really funny if they wanted to arrest me because I don’t want to spend 80 hours going over emails I had with Steve Bannon and Roger Stone."

Perhaps one of the most shocking moments on Monday night - and there were quite a few - came when CNN's Erin Burnett told Nunberg that she had to ask an "awkward" question. Burnett asked if Nunberg had taken any alcohol before arriving to the CNN interview. After fumbling for a few moments, Nunberg denied consuming anything that would inebriate him but Burnett looked straight at Nunberg and said, "I have smelled alcohol on your breath."

From telling CNN's Gloria Borger on Monday night that he would never agree to follow Mueller's subpoena (specifically in these terms: "Screw that. Why do I have to go? Why? For what?") to sheepishly letting AP know that he would probably cooperate after all, Nunberg seems to have had a quite the wild night on Capitol Hill.