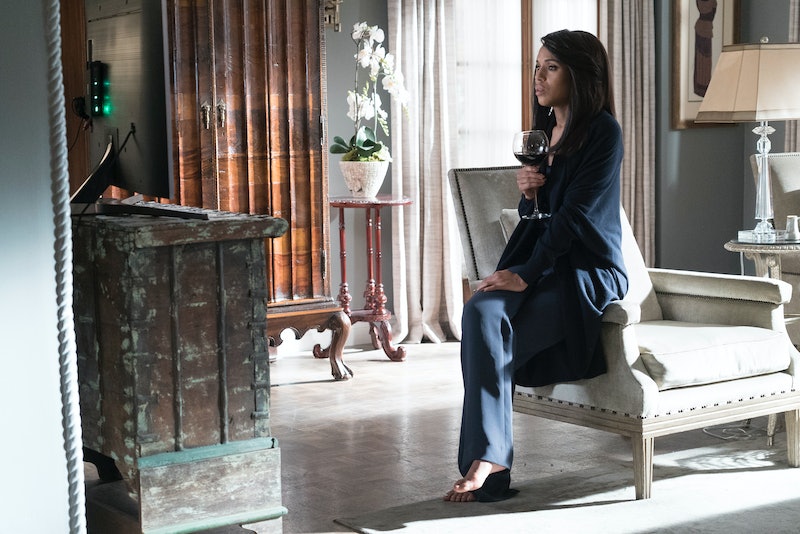 This post contains spoilers about Scandal's series finale. Scandal ended its seven-season run with plenty of drama. But one of the sweetest details came at the very end of the episode, when two young girls look at Olivia's portrait in the National Portrait Gallery. One of the girls was show creator Shonda Rhimes' daughter, Harper, making a cameo in the Scandal finale, as noted by PopSugar. The guest appearance makes the show's final scene that much sweeter, and it was a powerful note for Scandal to end on.

Fans who follow Rhimes on Twitter might have noticed that it wasn't a coincidence she shared a photo of her daughter on Thursday, before the episode aired. In the picture, Harper points to a painting that's been hanging in Quinn's office at the QPA space. Rhimes revealed in her tweet that Harper herself is actually the artist behind the painting — and she made it when she was just four years old.

Rhimes was sharing a sweet behind-the-scenes look into Scandal, but her tweet foreshadowed the finale, too. As Harper and the other young girl look up at Olivia's portrait, Harper is wearing the same outfit that she has on in the photo with her own artwork.

The scene of the two girls looking at Olivia's image in the National Portrait Gallery appears to be inspired by a photo of a young girl looking at Michelle Obama's official portrait. Many people saw the real-life photo as a reminder of how important representation is in politics. And plenty of moments in the Scandal finale, including this scene, showed how important representation is in the TV landscape, too.

During the last minutes of the episode, Olivia walks through the National Mall wearing a white coat similar to the one she wore in Scandal's very first episode. She passes by the National Museum of African American History and Culture along the way. The scene happens just after Olivia tells Mellie that after everything that's happened, she can finally do whatever she wants.

Olivia was never a perfect person, for sure — and that's part of what made her Scandal character so great for representation. Olivia, like so many real-life people, is flawed — but that's not always something we see from black women on TV. When the show debuted in 2012, Kerry Washington was the first black woman to lead a primetime network drama in almost 40 years. Scandal showed the power of representation on TV and paved the way for black actors to lead other shows. And making Olivia Pope imperfect smashed ideas of what a black woman character should be.

So, it's only fitting that at the end of the show, Olivia had her own portrait. She may not have always made the right decisions, but Olivia did a lot for the United States, and she deserved recognition for her achievements. And Scandal, too, deserves recognition for helping shape the modern TV landscape.

Of course, the Scandal finale and the portrait scene didn't tie up all the show's loose ends. Some fans, for instance, thought the two girls looking at the portrait may have been Olivia and Fitz's future children, though that seems unlikely. Others wondered if the fact that Olivia has an official portrait means that she went on to become president. Details aside, though, revealing Olivia's image in the National Portrait Gallery was the perfect way to end the series. And the fact that Rhimes was able to feature her own daughter in the iconic scene only makes it that much more powerful. It's safe to say this was one finale Scandal fans will carry with them long after the show's run.