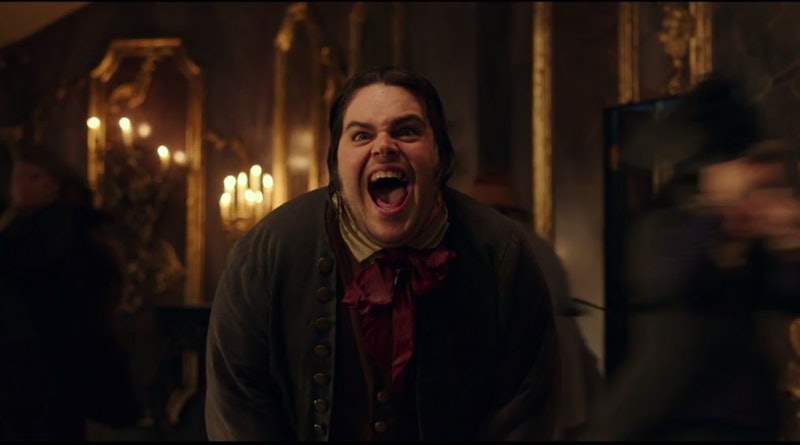 The romance between the Beast and Belle is a tale as old as time, but the classic story raises quite a few uncomfortable questions thanks to its whole enchanted castle setting. I know I can't be alone in wondering if everything in the castle used to be human, and, thanks to this deleted Beauty and the Beast scene, the one mystery I always wanted an answer to, but was too afraid to ask about has been finally been solved. Everyone, prepare to say a big thank you to Disney, because Entertainment Weekly shared an exclusive deleted scene that proves even the castle's toilets were former servants.

Come on, you know you've thought about it, and Disney's live-action version was brave enough to go there. The scene didn't make the final cut, but it is available on the Blu-ray, and it's glorious. During the movie's climatic final battle, Josh Gad's Le Fou attempts to retreat by slipping into the castle's bathroom. What he finds instead is a snarling, bubbling chamber pot by the name of Monsieur Toilette, who was voiced by none other than Hello Ladies' Stephen Merchant.

According to EW, there's a second scene of Monsieur Toilette and La Fou awkwardly meeting after everyone has returned to human form, and, you guys, I have to say I feel both satisfied and cheated by this news. Sure, Beast and Belle are great and all, but don't you want to know Monsieur Toilette's story? Can you imagine what he's been through since the Beast ticked off the Enchantress? On second thought, you may not want to imagine that.

I guess the world just wasn't ready for Monsieur Toilette and his plight as a living chamber pot in the Beast's castle. That doesn't mean this amazing and informative character's legacy should be forgotten. While he may exist just outside of the story's canon, this brave servant turned toilet offers Beauty and the Beast devotees an answer to one of the strangest, but totally legitimate movie questions of all-time — does the castle have a restroom, and if so, who got stuck with that job?

It was Monsieur Toilette, and he deserves your respect and admiration for taking on the task of being the most unfortunate living household object of them all.