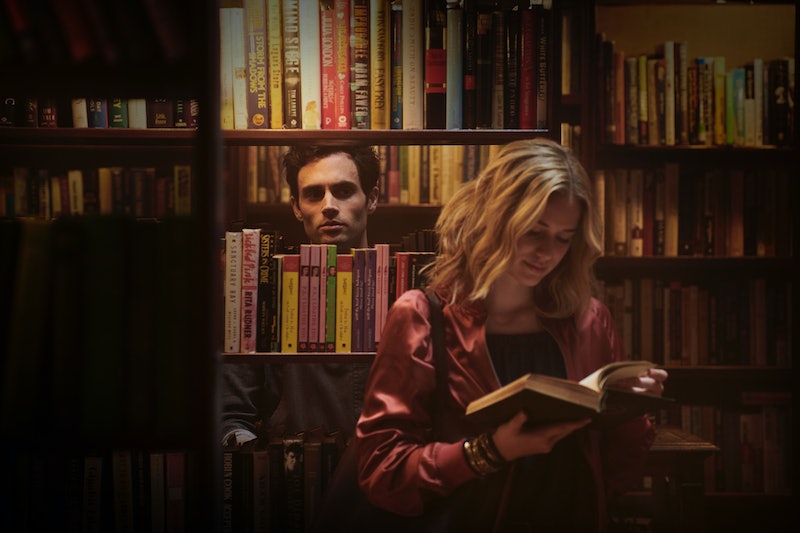 Was there a more bizarre pop culture phenomena than YOU Season 1? After the thriller premiered on Lifetime in September 2018, Netflix picked it up, renewed YOU for Season 2, and made the first season available to stream last December. And now that it's coming back for a second season on Thursday, Dec. 26, a YOU Season 1 recap may be just what the doctor ordered to remind fans of what exactly went down with Penn Badgley's violent stalker character, Joe.

When a pretty MFA student named Guinevere Beck (Elizabeth Lail) comes into Mooney's Bookstore, Joe quickly becomes obsessed. He begins stalking her, which is surprisingly easy because she loves having sex in her impossibly gorgeous first-story apartment with the curtains open!!! Beck and the cute bookstore owner strike up a relationship — but not before he kills her deadbeat boyfriend, Benji, by locking him in his basement plexiglass cage and poisoning him with peanuts, to which he's deathly allergic.

The only person who's not on the Joe train is Beck's friend Peach Salinger (a descendant of The Catcher in the Rye author J.D. Salinger), who's spoiled, snooty, and in love with her BFF. Joe realizes as much and tries to kill Peach while she's jogging in Central Park. She survives, however, and becomes more suspicious than ever. Eventually, Peach, Beck, and a guy named Raj visit the Salinger's estate in Greenwich, Connecticut.

Joe secretly shows up to spy on his girlfriend (which is of course a super normal thing to do), but Peach spots him in the house. After she pulls a gun on him, Joe murders her. After the fact, he writes Peach's "suicide note," which does the trick. There, Joe also pees in a jar, which is later confiscated as evidence.

After Peach's tragic "suicide," Joe and Beck's relationship flourishes. However, he soon becomes suspicious of someone she's texting, whose contact is just a fox emoji. Beck claims it's an old friend of hers, but Joe suspects she's cheating on him with her therapist, Dr. Nicky (John Stamos). They break up over it.

Three months later, and Joe has seemingly moved on with his neighbor, Karen. She's exceedingly kind and doesn't make the same demands that Beck always would. Despite this, he can't help but resent the fact that she unironically loves King of Queens, says "babe," and finds podcasts boring. Eventually, Joe and Beck reconnect, and he begins cheating on Karen with her. Riddled with guilt, he comes clean to his girlfriend, and they break up.

But after Joe and Beck get back together, he again suspects her of cheating on him with Dr. Nicky and holds the therapist up at gunpoint one night. Joe takes his phone, where he finds the evidence he was looking for — texts with Beck and compromising photos of them in bed. Furious, he confronts his girlfriend, and she confesses to everything. However, Joe forgives Beck when she says she loves him.

The beginning of the end occurs when Beck finds her boyfriend's stash of mementos in the bathroom ceiling, which includes a variety of phones, a jar of teeth, a used tampon, and a pair of her panties, among others. As a result, Joe locks her in his cage, where he tries to gaslight Beck into believing that she should stay with him. After all, didn't he do all of these horrible things so that they could be together? Doesn't she see that?

Audiences know that Joe used to date a girl named Candace, which didn't end well. It's heavily implied that he murdered her, too, especially given the fact that she "ran off to Italy" and supposedly started over. However, none of her friends have heard from Candace since her alleged transatlantic move, and to make things fishier, her brother died six months prior. In Episode 9, "Candace," audiences learn that Joe murdered the guy she was cheating on him with by pushing him off a building.

While imprisoned in the basement, Beck writes something that implicates Dr. Nicky of all Joe's crimes in a ploy to get him to free her. Convinced that Beck has learned her lesson, Joe lets her out, and she makes a run for the door. However, it's locked, and he murders her offscreen. After Beck's death (which everyone thinks Dr. Nicky perpetrated), Joe posthumously published what she wrote in the cage, which becomes a bestseller.

Not everyone's convinced that Dr. Nicky's guilty, however. The P.I. that the Salinger family hired suspects Joe, and audiences see Candace come back in the final moments of the series, very much alive.

More like this
‘Squid Game’ Creator Hwang Dong-Hyuk Just Dropped A Major Season 2 Tease
By Brian Anthony Hernandez and Bustle Editors
Does 'Locke & Key’s Ending Mean There Could Be A Season 4?
By Sophia Moore
Everything To Know About Netflix’s 'Never Have I Ever' Season 4
By Jack Irvin and Gabrielle Bondi
The 'First Kill' Cast & Fans Are Disappointed Over The Show’s Cancellation
By Brad Witter and Sophia Moore
Get Even More From Bustle — Sign Up For The Newsletter