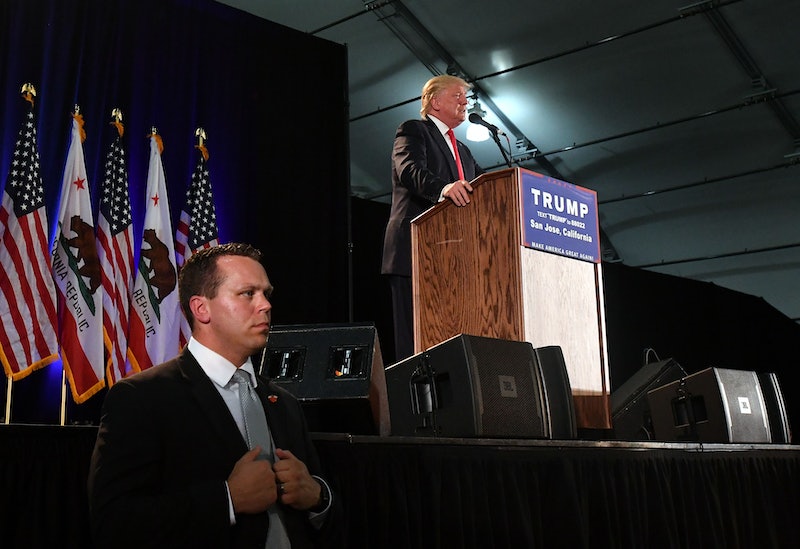 The Instagram video was taken at Thursday's Make America Great Again! Welcome Celebration — also known as the Inauguration Concert. The concert had been overshadowed by uncertainty, as many entertainers supported Trump's opponent, Hillary Clinton, and therefore refused to perform at the event, Variety reported. Singer Jennifer Holliday originally agreed to sing at the event, but she dropped out due to negative feedback from her fans. Eventually the concert, which was streamed online, included such performers as Toby Keith and 3 Doors Down.

The video, likely taken during country singer Lee Greenwood's performance of "God Bless the U.S.A." shows Trump enjoying the patriotic song, while the Secret Service agent behind him seems to struggle with his emotions. The agent looks incredibly uncomfortable, while Trump smiles and sings along.

I feel for you, Secret Service agent. No one expected this situation. No one expected you to have to negotiate with yet another president to hand over his phone — the same one he sends out all of those 3 a.m. tweets from. Dealing with former President Barack Obama and his Blackberry was hard enough.

And no one expected you to have to potentially foot a massive bill for protecting Trump and his family if they decide to stay in Manhattan. It's costing New York City $1 million a day to protect the family, three city officials reportedly told CNN. And that's not even considering the personal inconvenience of having to keep going back and forth between New York and Washington, D.C. Because Secret Service agents will have to go where the Trump family goes, and the family will likely be making a lot of trips between the two cities.

But mostly I'm sorry you had to sit through that concert, when Obama's first inauguration included performers such as Beyoncé, Bruce Springsteen, Stevie Wonder, and Mary J. Blige, among others. The list of famous people performing was so long that they had to limit each act to one song, Variety reported. And here you are, having to sit through song after song, mostly by country artists. And country might not be your thing.

Just remember one thing: We could have a new president in four years. One with a better set list for their inauguration.