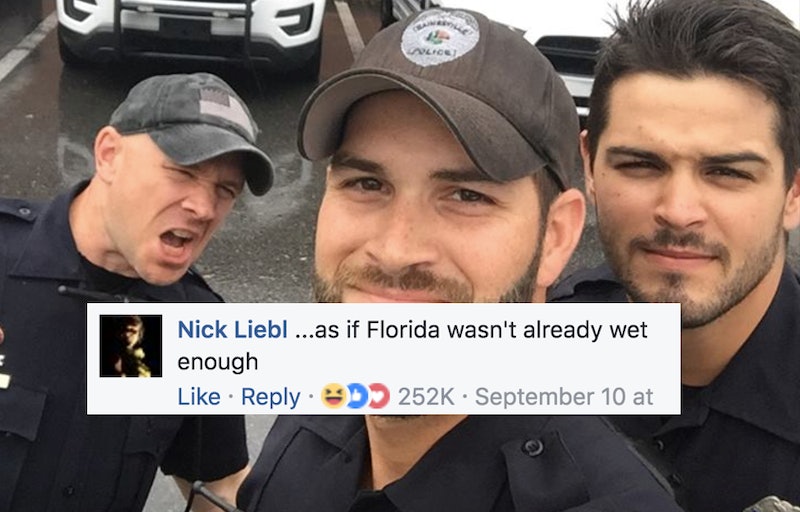 One thing that the internet will never not be into? Attractive men doing their jobs. We now have a man who is colloquially known as the hot doctor, another known as the hot photographer, and even a hot veterinarian. Hell, Alex From Target didn't even have to have a social media presence to go viral; he literally just existed at a cash register. In case you aren't up to speed, though, the internet has chosen its next fascination in the lineup of Men Doing Their Jobs, and it's this viral selfie of Florida policemen — a selfie that has generated hundreds of thousands of comments that, quite honestly, might make you sweat more than the picture itself.

The image was originally posted on the Gainesville Police Department Facebook page on Sept. 10 with the caption "Officers Nordman, Hamill and Rengering ... part of the night crew getting ready to do some work." The post was meant to shed some light on the prep work police were doing in the anticipation of Hurricane Irma to help ensure the safety of Gainesville residents, but it swiftly became so, so much more than that. Unless, er, objectifying strangers on the internet aids in hurricane prep, in which case ... right on the money, y'all.

Here's the image that launched a thousand (and then some) comments, featuring the officers in question just hours before they would unintentionally achieve viral fame.

"But who will protect these guys from an impending Cougar attack?" writes one commenter.

Another: "So, looks like my next vacation will be spent in Gainesville rolling through stop signs and driving with a tail light out every evening until I've been pulled over by the entire night shift. It's gonna get expensive, and my insurance premiums will go through the roof from all those tickets, but... *fans self with a stack of travel brochures and birth control pamphlets*".

Honestly, the comments were not only gloriously inappropriate, but also creative. "I never seen breakfast lunch and dinner in the same pic before," wrote one commenter; another wrote, "So if I don't remain silent, will something be held against me? Just want to be clear on the rights."

But perhaps the most iconic comment skyrocketed straight to the top of the post: "I can't believe how many women are objectifying these poor, fine, young, strong, handsome, brave, sexy, delicious, virile, ovulation-inducing, mouth-watering, beefy..... I can't remember where I was going with this ... "

While this certainly brings up a noteworthy point regarding objectifying strangers on the internet, the Gainesville Police Department and the officers involved seem to be taking it in stride, and have gamely responded to a few of the comments with their own hilarious responses. They also updated the post with some helpful information for people who are genuinely thirsting — two of the officers in the picture are happily married, and one of them is quite single, thank you very much. (Pouring one out for Gainesville Police Department's head of HR right now, y'all, because they're having one extremely busy day.)

1. We are dying with the comments. You've actually made our chief blush with some of them.

2. MRS. Nordman and MRS. Hamill have also enjoyed knowing how millions of women are going crazy over their husbands.

3. We can confirm that Officer Rengering (far right with the amazing hair) IS SINGLE.

4. On another note, Officer Rengering is being placed into Cougar Prey Protective Care, similar to the witness protection program for his safety.

5. Please do not call 9-1-1 and request this group respond to your "incident"

6. There WILL be a calendar.

Thank you all for the hilarious comments...they have brightened our time up here. As for the calendar, we are going to try and do something fairly quickly and funds raised will go to Hurricane Irma recovery here in Florida.

See? Morally ambiguous internet happenings with a happy ending. If you need something to giggle at today, take some time on your snack break or your walk home to scroll through the comments on this picture — then, obviously, follow the page and keep an eye out for the upcoming calendar, which will undoubtedly be the hot ticket item of this year's holiday season.