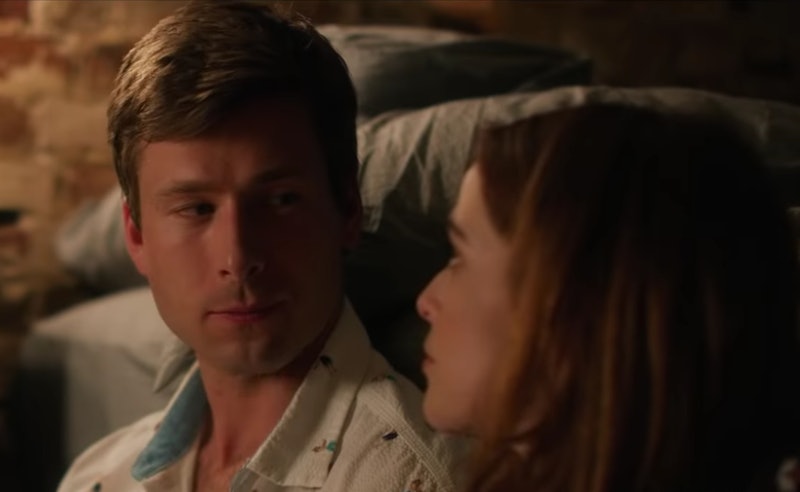 Spoilers ahead. As you have probably already heard, the new Netflix movie Set It Up is the most exciting rom-com release of the past couple years. The film tells the story of two over-worked assistants (Zoey Deutch and Glen Powell) who try to set up their bosses (Lucy Liu and Taye Diggs) so they can get more free time outside of work. Yet of course, while the bosses might not have a necessarily fated meeting, Harper and Charlie end up serving as the rom-com's universe-fated couple. It's adorable overall, but the cutest scene in Set It Up is, hands down, the one when Harper and Charlie share a pizza together.

What's so sweet about this scene is that it occurs when the duo are strictly friends. Yet naturally, it's the quintessential rom-com moment when you realize that the two main characters are perfect for each other, but they don't yet know it. Not only does thee scene, with its clear romantic tension, provide the perfect will-they-won't-they event, but it also includes some of the funniest, and most relatable, lines of the whole movie.

It all starts when Harper and Charlie go to Harper's BFF's rooftop engagement party. After they share a slow dance together, they decide to ditch the party early because, as Harper says, "There's no pizza on this roof, so I have to go." This leads to an adorable adventure — like every good rom-com includes — in which after Harper and Charlie get their pizza, they go back to his apartment, but realize they can't walk into his room through the living room. Why, you might ask? Oh, because Charlie's roommate Duncan (Pete Davidson) is playing Third Eye Blind in the living room, which means he's hooking up with someone right there. So, Charlie and Harper end up climbing the fire escape and going through his window so they can share their delicious meal.

As the duo sit on the floor eating the pizza, Harper proclaims, "This is the best meal I've ever had in my entire life." They both let out satisfied "mm" sounds and it truly seems like the perfect foreplay to lead to their first hookup in the movie. But unfortunately, that doesn't happen. They do however, share a solid 30 seconds of uninterrupted eye contact, and it's enough to make anyone watching scream, "Just kiss already!" into their laptop screen.

The kiss doesn't happen in that moment, and in a way, it's for the best, because it only causes more anticipation over when Harper and Charlie will finally get together. And the scene is also sweet for showing that Harper and Charlie really just like each other's company, even if they don't (yet) feel a physical attraction towards each other. Later in the movie, Charlie takes his girlfriend, Suze (Joan Smalls) to a fancy restaurant. It's so fancy that Kim took Kanye there for Kanye's half birthday, as Suze tells Charlie. During that dinner, Charlie realizes that Suze isn't actually the right partner for him, and he tells her, "The best meal I ever had was a five dollar pizza thrown up a fire escape."

As everyone knows, pizza can bring out anyone's strongest emotions, and their greatest affections for any food and/or person. It therefore makes sense that pizza is a huge part of Set It Up's cutest scene. Since you probably don't have time to watch the Netflix rom-com five times a day, you can at least watch this one scene that frequently to make yourself feel all warm and mushy, just like the cheese on top of a five dollar pizza.