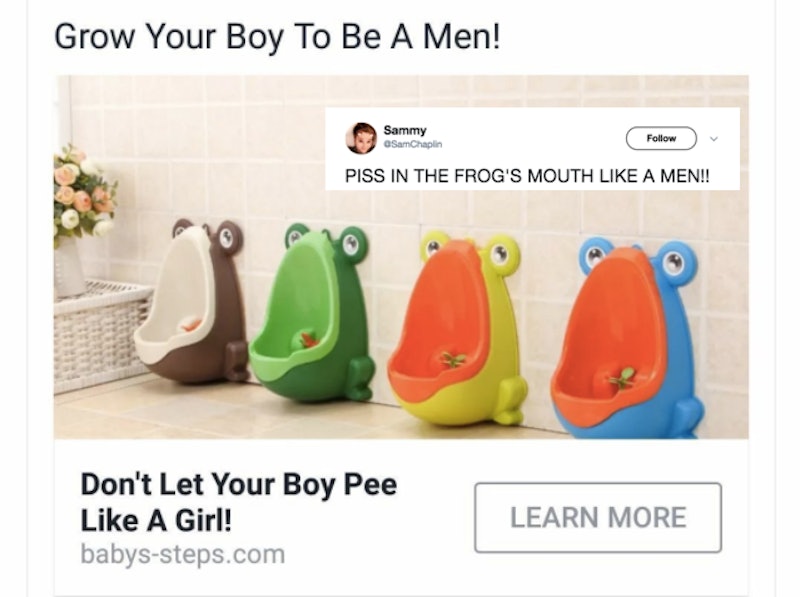 Picture this: You’re on Facebook one day when you see a weird and sexist ad for a patently ridiculous item for children. The item is a urinal for children shaped like a frog. The ad copy tells you, “Don’t Let Your Boy Pee Like A Girl!” What do you do? You do what Sam Chaplin did: You take a screenshot of it and you post it to Twitter with the funniest commentary you can think of. And then you wait for the reactions to roll in, because you just know it’s going to be good. Right? Right.

That is exactly what happened earlier this week. On Monday, Sept. 4, Chaplin, who is one half of the duo behind the podcast Cinema Swirl, posted a tweet that has, as of this writing, been liked 96,000 times and retweeted29,000 times — and honestly, it’s not hard to see why: This whole thing is absurd. The tweet features an ad Chaplin presumably saw on Facebook for a urinal shaped like a frog meant for children —but although that’s kind of frightening enough on its own (do kids really need their own at-home urinals? What’s wrong with the toilet? Why does it have to be shaped like a frog? Why do kids need to peein a frog’s mouth?), the kicker is the ad copy: It reads, “Don’t Let Your Boy Pee Like A Girl!”, while the post itself uses the text, “Grow Your Boy To Be A Men!”

It’s… truly something else. And Chaplin’s commentary on the ad nails it:

I can’t get over the whole “encourage your kids to pee in a frog’s mouth” thing. I just can't.

On top of which is, of course, the fact that the ad copy is blatantly sexist and reinforces toxic masculinity — and it's for a product that’s for kids. Yes, do let’s start teaching kids to disparage things coded as “feminine” from an early age and tell boys that it’s shameful or embarrassing to do anything “like a girl,” let alone pee like one. What a wonderful idea. In that really, really, not wonderful kind of way. I feel like this shouldn't need to be said, but everyone is free to pee however they like — whether that's sitting down, standing, or something else — no matter how old they are or how they identify. Just, y'know, clean up after yourself if you make a mess. That is literally the only rule.

The item is a real item, by the way (in case you were thinking that this whole thing was so bizarre it couldn’t possibly be real); the website featured in the ad Chaplin found is called Baby’s Steps. The frog urinal can be purchased at that site for £11.00 (a little more than $14). It comes in four colors: Blue, yellow, green,and “coffee,” which appears to be a brown frog with a white mouth. The website also seems to have a bit of a typo problem, so in that context, the whole “Grow Your Boy To Be A Men!” thing makes a little more sense — not a lot more, but some.

For what it’s worth, Baby’s Steps seems to be quite new; according to its WhoIs data, the babys-steps.com domain was registered via GoDaddy in Essex in the UK on Aug. 2, 2017. This matches up with when its social media pages were launched — the Baby's Steps Twitter page was created in August of 2017, and its very first Facebook post dates back to Aug. 7. Going by its reviews on Facebook, it also seems to have had something of a rocky start; all nine of the reviews that are currently live rate Baby Steps at one star. (Ouch.)

I also, uh, ran a reverse image search on the blue frog urinal and found out that you can buy it on Ali Express for about seven or eight bucks. So… there’s that.

(This story ended up going down a much deeper rabbit hol ethan I was expecting. Just sayin’.)

In any event, Twitter is having a field day with this whole thing — both the ad and the item — so come. Let us revel in the internet’s collective wit together. Here are some of the best reactions to… well… everything: