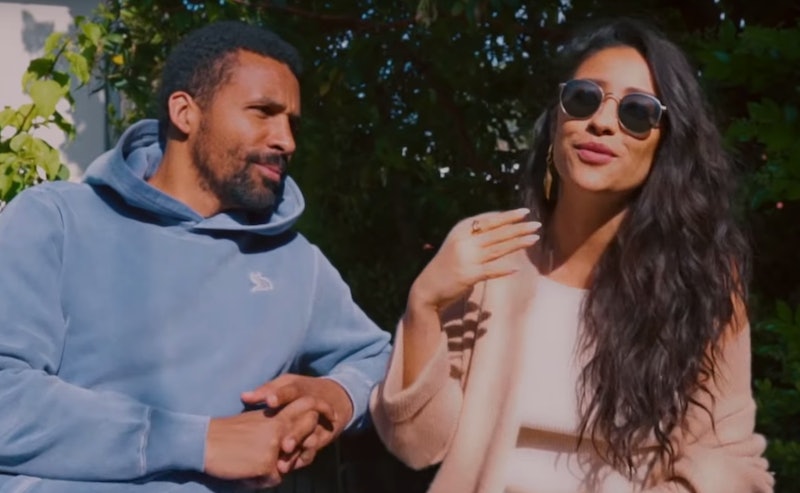 Pretty Little Liars star Shay Mitchell is an incredibly private person. Though she's been in a serious relationship with her boyfriend (and now father to her baby) for years, she's kept things out of the public as much as possible — rarely, if ever, sharing photos on social media. But now, Mitchell is letting fans into her life as she prepares to welcome her first child in a new YouTube series called Almost Ready. The show airs every other Wednesday and will also document Shay Mitchell and Matte Babel's relationship for the first time.

Preparing to become new parents together is something Mitchell and Babel are clearly both very excited about, and Mitchell said in her video teasing the series that she was ready to not hide her pregnancy or her personal life anymore. "When you're in the public eye, there are some things you just want to keep a secret until you feel ready," Mitchell said, likely regarding her delay in announcing her pregnancy (she's several months along). "This is gonna be really fun and awesome when I'm not trying to hide it anymore."

Because the series is jumping right into Mitchell and Babel's current day-to-day life, let's take a moment to look back at how this all started in the first place.

Even though Mitchell didn't and still doesn't really post about Babel on her Instagram, Teen Vogue reported that he did appear in some of her Snapchat stories. Eagle eyed fans quickly took notice.

January 4, 2017 — The Media First Reports That They're Seeing Each Other

In January 2017, Entertainment Tonight reported that Mitchell had been dating Babel, then an Entertainment Tonight Canada reporter, for a few months. That would mean they actually started seeing each other in 2016. According to ET, they met through mutual friends in L.A., even though they're both also from Toronto.

This marked the first direct acknowledgement from the couple that they were dating. "Happy Birthday to the one who makes me smile and always seems to find the rosé (or Hennessy) - @shaymitchell," Babel captioned a photo of the PLL star alongside a kissy face emoji.

"Always pause for a good pic and tell her how much you love her before admitting you forgot the wristbands at home," he captioned a throwback photo of them at an outdoor event.

As Bustle previously reported, Mitchell revealed on her Instagram stories in January 2019 that she'd experienced a miscarriage the previous year. She didn't say who the baby's father was, but if she and Babel have indeed been dating since 2017, you can logically assume it was him.

Mitchell thanked fans for their support in the tough time. "The support and affection that so many of you show me lifts me up during even my darkest days, one of which happened last year after I miscarried and lost the child of my hopes and dreams," she said on Instagram.

Mitchell must have gotten pregnant again around the time she revealed her miscarriage, because she said in her YouTube announcement that she was six months pregnant in June. She and Babel both took to Instagram to celebrate the news. Mitchell posted a photo of herself with her baby bump, which she captioned, "Does this mean I'm allowed to drive in the car pool lane at all times now?"

Babel got a little more serious in his caption, writing:

Watching the both of you grow over the past 6 months has been the most beautiful thing in the world. The strength, vulnerability and grace you've had during this pregnancy has left me in awe, you're going to be an incredible mom...We're lucky to have you, love you.

Expect to learn even more about Mitchell and Babel's lives together on her YouTube series as they prepare to welcome their child into the world together.