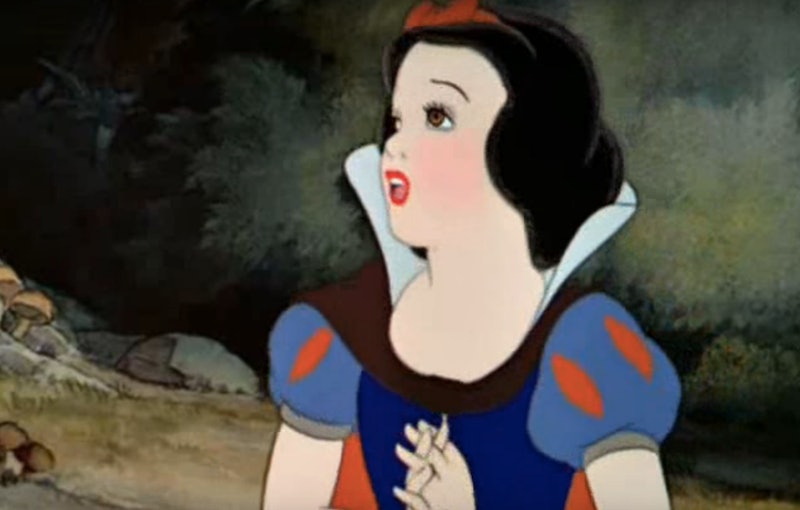 Some movie fans love to come up with theories even though a lot of times they go against what a film is obviously telling us. But — and I know this is probably what they all say — a theory about Snow White and the Seven Dwarfs that's been circulating makes a lot of sense. It's based on real history, which is a lot more than can be said for some Disney-related theories.

Cosmopolitan points out that the theory was shared in the comments section of a BuzzFeed story titled "12 Disney Movies That Have Horrifying Origin Stories". The top comment is from someone named Matt, who wrote a long explanation of why the prince in Snow White is actually the Grim Reaper and why Snow White is actually dead by the end of the movie. Matt believes that the film was made in such a way that children watching it would see Snow White getting a happy ending, while adults who knew the real story would see clear signs that she died.

So, what's the real story? It's been suggested that Snow White was inspired by the real-life Margaretha von Waldeck, a young aristocrat who lived in the 16th century Germany. (That said, it's been suggested Snow White was inspired by other people, too.) When she was a teenager she moved out of the home of her father and stepmother, and encountered Philip II of Spain while at court in Brussels. It is thought that someone didn't like the idea of Margaretha and Philip marrying (for either political or religious reasons) because Margaretha was poisoned and died at the age of 21.

Matt shared some more details in their comment that make the connection between Margaretha and Snow White seem even stronger: "The Real Snow White, Margaretha von Waldeck, was a wealthy noble whose father owned copper mines run by slaves who were mostly children because they fit through small mines easier. Thus dwarfs who spend all day mining gems but live 7 to a house." Seems like a clue, for sure! Matt also says that people liked Margaretha and how kind she was and that this could be how she got to be immortalized with the story.

As for why it's theorized the story shows her dying, the commenter explained that "the prince is supposed to be kind of like an angel of death, basically a happier version of a grim reaper." They note that Snow White first sees the prince when she almost dies by falling into the well, and doesn't seem him again until she is literally on her deathbed. "When you die, the air is expelled from your lungs. Folklore said this was death kissing you to take the 'breath of life' from you," Matt writes.

Then, the nail in the coffin (I know, I'm sorry) comes at the very end when the castle is shown as being up in the clouds and looking all heavenly.

Matt's comment is from months ago, and it appears this is all circulating now after it got picked up by some UK publications. Unsurprisingly, this is not the first time this theory has gone around over the years, either.

It doesn't appear that Disney or anyone involved with the 1937 film has ever confirmed that the movie was meant to show two possible outcomes of the story, but if it (and potentially also the original fairytale) were meant that way, then that would be pretty creative. Either way, it's definitely hard to see the movie the same way now.