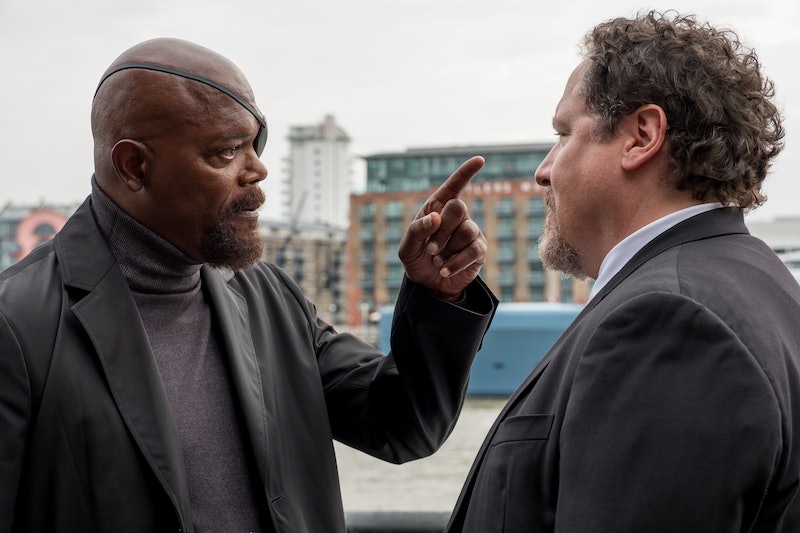 Avengers Endgame may have had the most shocking finale of any movie in the Marvel Cinematic Universe, but it's the Spider-Man: Far From Home post-credit scenes that left viewers really scratching their heads with their jaws on the floor. Spider-Man: Far From Home spoilers ahead. Sure, Peter's back in NYC, high-flying with MJ over Penn Station, but the bombshell that his identity has been compromised is a lot to take in. Not only that, but in the second post-credit scene, it's revealed Talos — the Skrull leader from Captain Marvel — has been acting as Nick Fury, inspiring a 'Spider-Man: Far From Home’ Nick Fury theory that could explain a lot. More specifically, it could explain this MCU plot hole.

In a scene in Captain Marvel, Fury told Carol/Vers a crazy, unknown fact that a Skrull couldn't possibly know: he can't eat toast diagonally. A weird, picky preference, but nothing too significant. That is, until eagle-eyed viewers pointed out that in Avengers: Age of Ultron, Fury eats a sandwich that's cut diagonally. Sure, it doesn't seem to be toasted, but it's still a similar food. Plus it's the only time you ever see Fury eat, and as YouTube channel "deffinition" pointed out, food can be very significant as clues or symbols in movies. The question is: was this a glaring plot hole, or was this a clue? Well, thanks to the Nick Fury twist in Far From Home, it seems fans might finally have their answer, as it's entirely plausible that Talos has been posing as Fury since the second Avengers film.

That said, just because Fury might have been a Skrull by the time Age of Ultron rolled around, doesn't mean he's been a Skrull all along. Remember, the last time fans saw Talos in Captain Marvel, he was flying off into space with Captain Marvel, searching for a home safe from the Kree. That may have been in the '90s, but it's hard to believe that he would have returned to Earth before at least the late 2000s.

Another reason Fury couldn't have been a Skrull this whole time is his Avenger initiative. His involvement with the initiative, named after his friend Carol Danvers' call sign, means Fury was probably still himself in Iron Man, when he first approached Tony Stark about it. After all, Nick Fury would never leave such an important initiative in the hands of an amateur. The same line of thinking would also hint at it being the real Fury throughout Thor and Captain America: The First Avenger, since he's still gathering his team. And one would also hope that Maria Hill was actually Maria Hill in the first Avengers and her subsequent other appearances, since she's such a great agent (with amazing one-liners throughout her time in the MCU and on Agents of S.H.I.E.L.D.).

Fans won't get an answer to how long Talos has been posing at Fury until at least the next movie. Phase 4 has been super hush-hush, but hopes are that more will be revealed at SDCC this year. Far From Home really couldn't give fans a break after Endgame, huh?