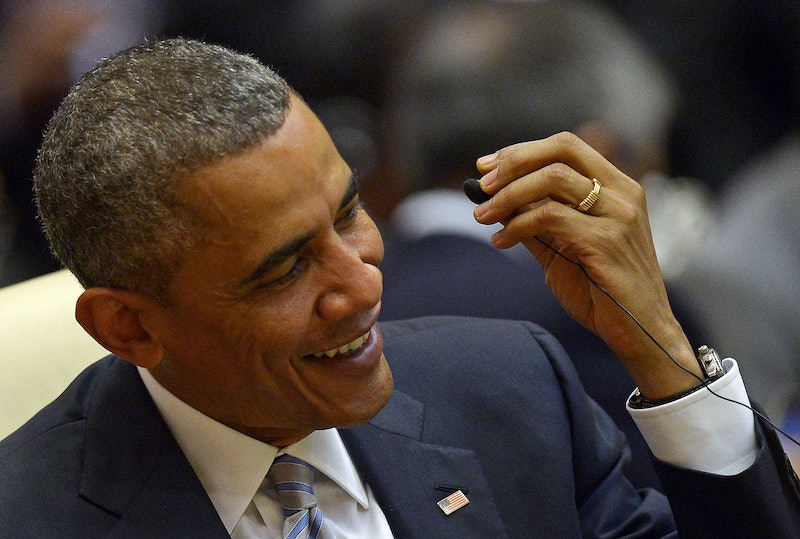 When you've been president of the United States, the options to move up are somewhat limited. You're looking for a horizontal move — at best — and often early retirement or side projects are the most you can hope for. But it seems President Barack Obama may have been offered the ultimate follow-up gig. You already know the commander in chief is a big music fan, and for the last few years, he's been giving suggestions via his very own White House Spotify playlists. Now he's been offered a job at the music service, and Obama becoming Spotify's "President of Playlists" would be a dream come true.

And I don't mean a dream come true for you if you're a major fan of his mixes, but actually for the president himself. He told the wife of the former U.S. ambassador to Sweden, Natalia Brzezinski, that he's a big fan of the country and that he'd like a job with the tech music giant. She wrote about it on Instagram. "I'm still waiting for my job at Spotify... Cuz' I know y'all loved my playlist!" he reportedly quipped.

Well, the folks at Spotify were listening, it seems, because they have written up the perfect job listing for Obama. First of all, the job title is awesome: "President of Playlists." And it's described as "overseeing our music curation and playlists team, across offices around the world." How cool does that sound? And obviously they need someone like Obama. They ask that candidates "have at least eight years experience running a highly-regarded nation."

And just in case some other world leader tries to edge him out, they ask for "good team spirit, excellent work ethic, a friendly and warm attitude, and a Nobel Peace Prize." Not many of his fellow world leaders have that under their belt.

Spotify CEO Daniel Ek even tweeted at Obama to give him a personal heads up about the listing, so I doubt any references are necessary. If they are, surely Joe Biden or Hillary Clinton could put in a good word. Or some sort of ABBA-themed Swedish playlist on the White House channel before the Inauguration could do the trick.

Currently, Obama has a number of playlists out. If you haven't heard them, they're worth a listen. He has a holiday playlist from 2015 and four summer playlists from the last two years — one each for day and one for night. You can follow them here.

We may have to say goodbye to Obama, but he may be around in your earbuds for years to come.

The full ad is below.

Spotify is growing globally, and we are now looking for a President of Playlists. In this position you will be overseeing our music curation and playlists team, across offices around the world.

Spotify started in Sweden in 2006, but we’re now in over 60 countries and counting. As an organization, we are full of hope, and always open to change.

Provide world-class leadership to our playlist editors and supporting staff.

Identify and substantiate new playlist ideas, e.g. from a playlist for shooting hoops with your friends, to the perfect warm up playlist for addressing the nation about health care legislation that bears your name.

Analyze data and performance of playlists in a clear and transparent manner using all available intelligence. Attend daily briefings.

Have at least eight years experience running a highly-regarded nation.

Familiar with the Spotify platform, with experience in programming playlists at a federal level. Anything from an eclectic summer playlist, to a celebratory, “I just found my birth certificate” playlist.

Have good relationships with a wide range of artists and musicians. Ever had Kendrick Lamar play at your birthday bash? We’d love to hear about it!

Can speak passionately about playlists at press events. Let us be clear, you should be nothing short of one of the greatest speakers of all time.

A keen attention to detail and consistency. Able to work closely with other departments, so playlists can hold up to public scrutiny.

Someone with good team spirit, excellent work ethic, a friendly and warm attitude, and a Nobel Peace Prize.

We are proud to foster a workplace free from discrimination.

It doesn't matter who you are, where you come from, what you look like, or what music you love. We believe that diversity of experience, perspectives, and background, lead to a better environment for everyone. We value this and encourage you to come be a part of changing the way the world listens to music.