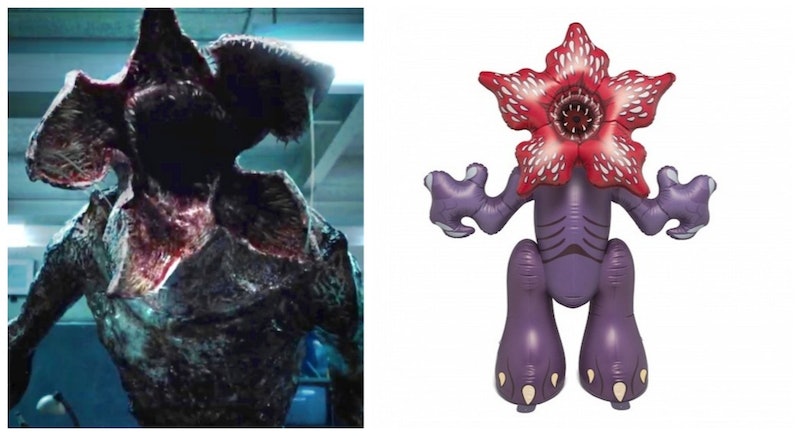 When it gets really, really hot in the summer, even the monsters that live in the Upside Down need to cool down — and now, they can do it in an appropriately creepy way, thanks to this gigantic Stranger Things Demogorgon sprinkler. At six feet in height, it’s still a bit shorter than an actual Demogorgon (canonically, they’re about nine feet tall, per the Stranger Things Wikia); it is, however, still taller than the average human, who typically measures between five feet, three inches and five feet, seven and a half inches. Also, it is delightful, and I can’t wait to get one for my own backyard.

Made by BigMouth Inc., the inflatable Demogorgon sprinkler is part of a whole line of officially licensed Stranger Things summertime accessories. Ranging from pool floats to beach towels, the collection — which was announced earlier this season via a blog post on BigMouth’s website — includes such highlights as reversable inner tubes (one side represents Hawkins, Indiana, while the other represents the Upside Down), drink floats designed to look like the Scoops Ahoy uniform’s sailor hat, and a “Have You Seen Barbara Holland?” milk carton-shaped beach blanket.

But the star of the show is undoubtedly the Demogorgon sprinkler. The inflatable, six-foot-tall monster is made out of PVC and easily hooks up to any standard garden hose. After you inflate it and get it connected to a water source, it sprays water out of its… snout, I guess? Gaping maw? Tooth tunnel? I’m not totally sure what one calls the inside of an opened-up Demogorgon face, but whatever the correct term is, that’s where the water comes from. Here — the box art should give you an idea of what it looks like in action:

And for the curious, here’s what the sprinkler looks like in its natural habitat, courtesy of Bloody Disgusting Editor-in-Chief John Squires, who was lucky enough to acquire one for his own yard:

BigMouth has been around since 2004, when the Glastonbury, Conn.-based company’s very first product — the “Get Off The Phone Excuse Machine” — debuted at the New York International Toy Fair. In the 15 years since, they’ve grown to be a major player in the “outrageous lifestyle product” sector, as they describe it; they make and sell everything from weird and wacky mugs to those bizarre little “tiny hands” things, all designed and manufactured by the company itself. In recent years, BigMouth has become widely known for its pool floats and other summertime accessories — like, for example, that gigantic, inflatable unicorn sprinkler that made the rounds earlier this summer.

The sprinklers — many of which are marketed as “Ginormous” — aren’t cheap, of course; the six-footers are usually in the realm of $45 to $75, depending on the retailer. As the newly-released cream of the crop, though, the Demogorgon is going to set you back even more; it’s a whopping $99.99 on both Target and Amazon. But, uh… if you have the disposable income (and the space for a huge monster, of course)? I’d argue that it’s worth it.

What’s more (and here is where I note that there’s a SMALL SPOILER for Season 3 ahead), even though we may not have actually seen a Demogorgon in Stranger Things for a while now — the second and third seasons' primary villain was the Mind Flayer — it’s possible that the Season 1 baddie might make a return again in the future; the short scene that appeared in the credits of Stranger Things 3’s final episode did let us know that there’s still at least one Demogorgon alive and well and living outside of the Upside Down. Maybe we can consider the sprinkler incarnation of the creature an omen of things to come.

Find out more about the Demogorgon sprinkler on BigMouth’s website, and nab it at retailers like Amazon and Target. Just, y’know… don’t forget to close the gate when you’re done.