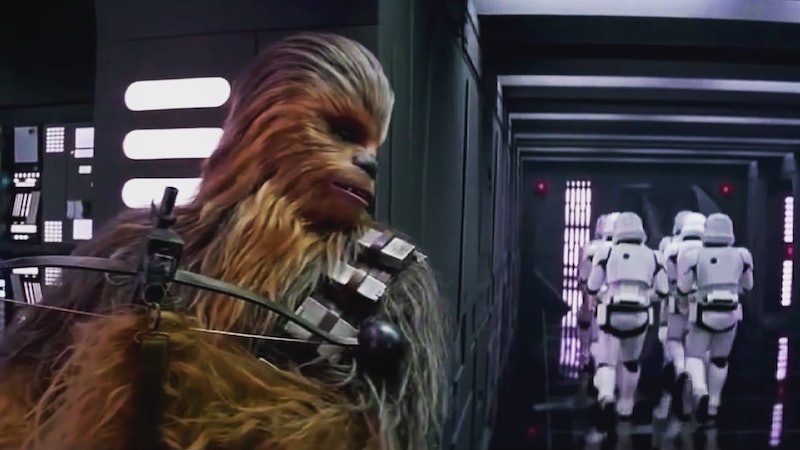 "Let him have it. It's not wise to upset a Wookiee." This sage advice from Han Solo was bestowed upon this galaxy and the one that is far, far, away in Star Wars: Episode IV - A New Hope during a holographic game between R2-D2 and Chewbacca. At the time, the R2 unit made a fair move that would make him the winner of the game until Solo suggests he takes it back. The reason? "That's 'cause droids don't pull people's arms out of their sockets when they lose. Wookiees are known to do that. " In a deleted scene from The Force Awakens which was included in 3D Collector's Edition Blu-Ray and was uploaded to YouTube recently, fans get to see what happens when a Wookiee doesn't get his or her way — and it's not pretty per se, but it's pretty funny in a very dark way.

Because the internet is truly a beautiful place, fans have been blessed with a deleted scene in which Chewie is dissatisfied and responds as a Wookiee is wont to do — and the results are gruesome but also mildly hilarious. The scene is probably too ghastly for the young eyes which are tuning into the Disney's iterations of the Star Wars franchise, but are a treat to those of us who don't have to worry about parental control blocks.

The scene takes place in Maz Kanata’s castle in Takodana as the crew attempts to get help from the wise and aged alien. While in the cantina, Rey gets stopped by the CGI-heavy junk boss of Jakku, Unkar Plutt (played by Simon Pegg). The villainous garbage collector tracked the young hero because she stole his previously stolen Millennium Falcon and threatens her, "I'm going to make you pay for what you've done." When Rey points her weapon at Plutt he punches her in the face and quickly disarms her.

But that's OK because it's Chewbacca to the rescue. He grabs the weapon out of the icky-looking aliens mitts to the shock of both parties. Even though Plutt taunts Chewie, "I'm not afraid of you," while poking the not-so-gentle giant's bandaged arm and sneering, "half a Wookiee isn't much" — his bravery is clearly not in his best interest. Chewie takes said poking hand, twists it, tears it out of its socket, and throws it onto the deep space equivalent of a pool table — all while Plutt screams in pain.

I can certainly see why this brutal scene didn't make the final TFA cut, but Star Wars isn't the same without some action in an alien-populated bar. Who could forget when Han shot first or when Obi-Wan sliced Ponda Baba's arm off in the Mos Eisley cantina?

And besides, we were all reminded of a very, very valuable lesson — never, ever, mess with a Wookiee. Watch the scene in the video below.