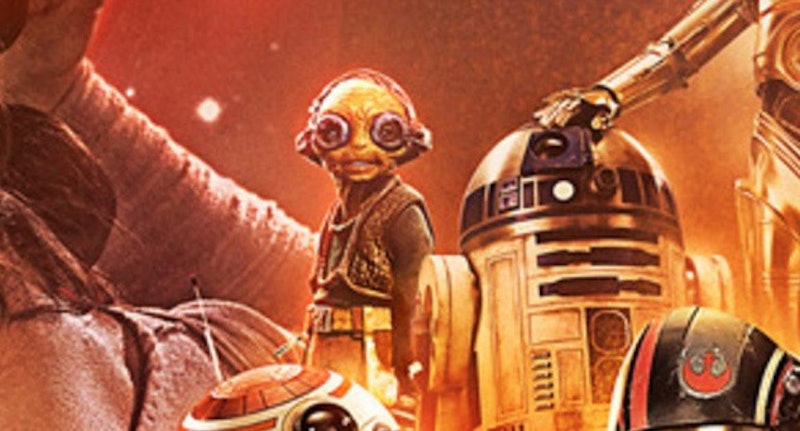 For all the secrecy surrounding Star Wars: The Force Awakens, almost no character has been kept more in the dark than Lupita Nyong'o's Maz Kanata. Only a few details about Maz were released prior to the film, with director J.J. Abrams telling EW that she was a pirate who had a past with Han Solo. Now that fans have seen The Force Awakens, Maz Kanata is still a mysterious character who left fans with many more questions than answers. So, who is Maz Kanata and what is her story?

Here's what Abrams teased to EW about Maz Kanata's backstory before The Force Awakens was released : "Her history is that she was a pirate for a long time. She's lived over a thousand years. She's had this watering hole for about a century, and it's like another bar that you'd find in a corner of the Star Wars universe." Based on that short history, fans know that Maz Kanata was alive to see not only the rise of Luke Skywalker and the fall of Darth Vader that took place in the original Star Wars trilogy, but also the corruption of Anakin Skywalker and the rise of the Empire seen in the Star Wars prequels. She's seen it all, and, more impressively, she's survived.

And, while (spoilers!) Maz Kanata plays a pivotal role in The Force Awakens — she is the one who ends up giving Finn Luke's old lightsaber and inadvertently awakening the force in Rey — any hint as to who she really is was left out of the film. Maz Kanata is also noticeably absent from the character databank featured on the official Star Wars website, though Teedo, a character who only has a few seconds of screentime, is included. Disney is purposefully keeping the details of Maz Kanata a secret, but here's what's known for sure.

Maz Kanata is introduced in The Force Awakens as a kindred spirit of Han Solo — someone who lives in a sort of moral grey area, with friends in all corners of the galaxy. In fact, it's Han Solo who introduces her to The Force Awakens' new characters, Finn and Rey. Han refers to Maz Kanata as "an old friend," and promises Finn and Rey that Maz will be able to help them get a ride to the Resistance base.

When Maz sees Han Solo walk into her tavern in The Force Awakens, one of the first things she asks him is where her "boyfriend" is, meaning Chewie. So, at least we know Maz Kanata has good taste in men.

She Ships Han And Leia

Maz Kanata refuses to help Han find Finn and Rey transportation to the Resistance, telling Han in no uncertain terms that he should go and join the fight. The undercurrent of this advice is clear: stop running away from Leia.

Maz Kanata is unlike any other character ever seen in the Star Wars universe, but something about her is awfully familiar. She's old, wise, and encourages young Finn and Rey to join the Resistance and fight against the First Order. Could she be the new Yoda? With her small stature and inquisitive gaze, it seems impossible that the people who designed Maz Kanata didn't have Yoda in mind when creating her. Moreover, Maz Kanata's most powerful weapon are her eyes, which seem to see into people's very souls — something Yoda also used to his advantage.

Maz Kanata's ability to read people through their eyes was all essential to her character, Abrams told EW, adding that the goggles Maz Kanata wears are meant to emphasize her power. "I had some specific ideas about how she would work and what she would do. I had this pitch about these goggles that she wore. Her eyes are an important aspect of her character, and you'll see how it plays out," Abrams teased.

The director has also said that, in his mind, Maz and Yoda did, in fact, know each other in the past. "I do believe that Maz and Yoda, at some point, crossed paths. But... that is not something that happens in the film," Abrams said at a Force Awakens press conference in LA.

Unlike Yoda, Maz Kanata does not appear to have the Force within her, so it seems unlikely that she will be the one to teach Finn and Rey how to wield their powers. It's also unclear whether or not Maz Kanata will have the chance to become the next Yoda, as the fate of her character was left unclear. Let's hope this wasn't the last audiences have seen of her.