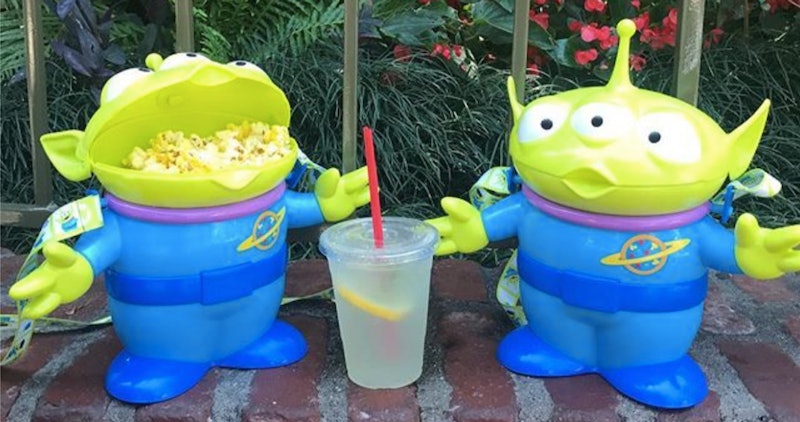 Pixar Fest is currently in full swing at the Disneyland Resort in Anaheim, Calif. — but although there’s plenty of amusingly-themed food to please the palate while you’re there, I don’t think anyone anticipated how popular one particular item would be: The Toy Story alien popcorn buckets available at Disneyland for Annual Passholders during Pixar Fest are proving to be so much of a stand-out that people are waiting hours in line to get one.

I’ll be honest: I can’t really fathom waiting that long for a popcorn bucket. I mean, to be fair, it’s a cute bucket (the fact that you open the bucket by opening the alien’s mouth is a nice touch) — but popcorn will never be worth hours of my time to me. Then again, I will happily wait in line for hours to ride a two-minute-long roller coaster, so… we’re all living our best lives, is what I’m saying.

The bucket, which is exclusive to Annual Passholders during Pixar Fest, first hit Disneyland’s popcorn carts on April 24. Here’s how the promo works: At seven different popcorn carts spread across both Disneyland Park and California Adventure, Annual Passholders can purchase the alien bucket for $20. Then, whenever you empty out the bucket, you can take it back to one of those popcorn carts, or to one of four additional participating ones, and get a popcorn refill for $1.

Instagrammer welovedisneyx5 was one of the lucky fans to snag one. It looks like this:

In Disneyland Park, the bucket can be attained at the Frontierland cart near the Mark Twain Riverboat, at two Main Street, U.S.A. carts (one near City Hall, the other near the Central Plaza), at the New Orleans Square cart near the Haunted Mansion, and in Fantasyland at the Small World Promenade cart; meanwhile, in California Adventure, both the Buena Vista Street cart near Carthay Circle and the Grizzly Peak cart near Soarin’ Around The World have it. The additional carts for refills only are in Fantasyland at the Fantasyland Theater, Mickey’s Toontown near Gadget’s Go Coaster, and in Tomorrowland near Star Trader in Disneyland Park, and in Hollywood Land at the Hyperion Theatre in California Adventure.

Here's another image of the bucket, from Instagrammer remis_disneylife:

Technically, the buckets are supposed to be available through May 24… but honestly, I don’t know if they’re going to make it that long. The deal is meant to be one of those “until May 24 or while supplies last” kind of thing, per Disney’s verbiage — and according to the OC Register, Disney officials are staying close-lipped about exactly how many they actually plan to offer. As such, it wouldn’t surprise me if the whole thing sort of ends up being a Starbucks Unicorn Frappuccino situation: Although I’m sure the folks at Disney knew they’d have a hit on their hands with this bucket, I could very easily see the demand being so high that even an enormously impressive supply might start to run out early.

I’m not kidding when I say that people are waiting hours in line for the thing; multiple Instagram accounts confirm the length of the waits: “The lines for this little dude in #Disneyland are PROHIBITIVE!! Three hours??” wrote the Disney Food Blog; “Happy anniversary — two hours I’ll never get back,” reads a screenshot of a text message posted on @thriftingthingamabobs’ page; “We finally got our alien — it took us 1 hour and a half for this. But was worth it!,” said @disneyland_dates; and according to @not_your_typical_disney, a “‘shorter’ line over by the Opera House… was about 45 mins.”

Here is what one of the lines looked like on Tuesday:

That’s… a level of dedication I do not have for most things. I am impressed, Disneyland Annual Passholders.

The good news is that if you did manage to snag one of these cute little buckets, your $1 refill perk continues for a few months even if the buckets themselves sell out: According to the Disneyland website, it’s good until June 21. And if you’re really desperate, they’ve already started to hit eBay; they’re going for multiple times their original price, of course (I’ve seen them range from $30 to a whopping $80, with the median being somewhere around $60), but if that’s a thing you’re willing to shell out for, go for it. Just be careful of counterfeits — it’s a major problem that plagues online auction sites.

Oh, and hey, even if you miss the alien buckets, they’re not the only trick Disney has up its sleeve for Pixar Fest: As the Disney Food Blog notes, a Monsters, Inc.-themed premium popcorn bucket shaped like Sully is on the way later on. That’s pretty rad, too.