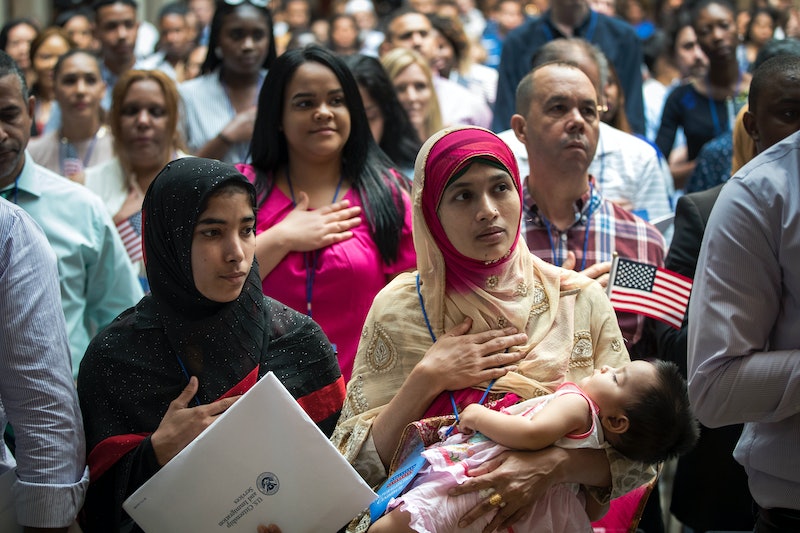 Ever since President Donald Trump announced a travel ban at the end of his first week in office, immigration has been one of the defining topics of his presidency. That's continued, through two more iterations of the travel ban and the family separation crisis that the administration created. Now, the Trump administration might limit citizenship options for legal immigrants in a new and equally controversial step.

According to NBC News, this move would be another part of White House policy adviser Stephen Miller's overarching immigration reform plan, and the White House could put it into effect without needing any approval from Congress. Specifically, New York magazine explained that if the Trump administration took this step, legal immigrants who had ever received any of a number of government benefits — think Obamacare, food stamps, or children's health insurance through CHIP — could be denied citizenship on those grounds.

The Trump administration has pushed to limit immigration overall, with policies like the cuts to the number of refugees that would be accepted into the country and, very controversially, the zero tolerance policy at the southern border that resulted in hundreds of migrant children separated from their parents. This move would be different, though, because it would be targeting immigrants who have come through legal channels rather than undocumented immigrants or even refugees.

As New York pointed out, it nullifies one of the administration's stated reasons for enacting the previous policies, as they claimed that they were only going after people who had broken, or attempted to break, immigration law. NBC News, for example, tells the story of Louis Charles, an immigrant from Haiti who currently has a green card. Charles is a taxpayer and a nurse's assistant, but he needed to take advantage of government health insurance in order to care for his adult daughter, who is disabled. Despite having done that completely legally, this new policy could result in him being unable to attain citizenship.

While Trump often spoke about illegal immigration and refugees during the campaign, his administration's new focus on legal immigrants and naturalized citizens has been a surprise to observers. In June, for example, the administration began a push to find naturalized citizens who may have lied on some part of their immigration paperwork and then denaturalize them, taking their citizenship away. This, according to NBC News, was previously a very rare strategy that was most commonly used to catch Nazi war criminals who escaped to the United States after the war.

While that still would have focused on non-native Americans who had broken a law at some point, this latest policy would punish immigrants simply for working at low-income jobs. As NBC News pointed out, it wouldn't just affect people living at or below the poverty line; it could also affect immigrant recipients of government programs making up to 250 percent of the poverty limit.

America, of course, has always been a nation of immigrants. According to Vanity Fair, this doesn't exclude Stephen Miller himself, who is descended from refugees on one side, and from a man who failed his naturalization exam on the other, according to Yahoo News. When it comes to policies like this, though, all of that is apparently forgotten.