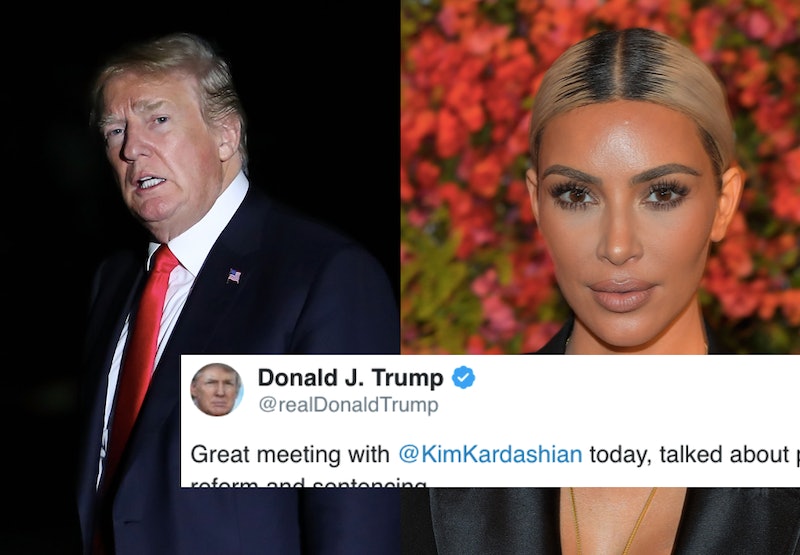 Five years ago, the idea of Kim Kardashian and Donald Trump posing for a photo in the Oval Office would have seemed patently absurd, and yet here we are. Kardashian visited the White House Wednesday to talk prison reform with the president, who subsequently posted a photo of the two on Twitter.

"Great meeting with @KimKardashian today, talked about prison reform and sentencing," President Trump tweeted. Kardashian has been lobbying Trump to pardon Alice Marie Johnson, a 63-year-old great-grandmother serving life in prison for helping to facilitate a drug deal, and it's believed that she discussed Johnson's case with her fellow reality TV star during the Wednesday visit.

Vanity Fair reports that Kardashian's visit with Trump was the result of months of backchannel talks between the two camps (and, additionally, that White House staffers "joked" amongst each other about which one would get to escort Kardashian around the West Wing). Kardashian has been in talks with Trump's son-in-law and top adviser Jared Kushner about Johnson's case; according to Vanity Fair, Kushner became an advocate of sentencing reform after his father was sent to prison for witness tampering.

It remains unclear precisely what Kardashian and Trump discussed — or whether the president plans to pardon Johnson.

Johnson's incarceration has long been held up by prison reform advocates as a textbook example of the criminal justice system's shortcomings. After suffering a series of tragedies in her personal life, Johnson assumed a minor role in a drug trafficking operation in the 1990s; since her conviction, she's said that she was involved in relaying code words between other drug dealers, but never set up any deals or handled drugs herself.

During the trial, 10 of Johnson's co-conspirators testified against her, and in exchange, they received prison sentences ranging from no time to 10 years. Johnson, however, was sentenced to life in prison for the nonviolent offense, despite having no previous drug charges. She appealed to the Obama administration for clemency on three separate occasions, but was denied every time.

Kardashian, meanwhile, learned about Johnson's case after viewing a short video about it produced by Mic, which she retweeted to her 59 million Twitter followers in October. Since then, she's hired celebrity attorney Shawn Holley to fight for Johnson's freedom, and has reportedly been speaking with both Kushner and Ivanka Trump about the possibility of Trump pardoning Johnson.

Kardashian isn't alone in taking up Johnson's cause. The ACLU has cited her imprisonment in its calls for sentencing reform, while Can Do Clemency placed Johnson at the top of its list of incarcerated women who deserve clemency. In addition, a petition demanding Johnson's clemency has gathered over 265,000 signatures as of this writing at Change.org.

In a letter that TMZ published in May, Johnson expressed profound gratitude to Kardashian for her efforts.

"There are no words strong enough to express my deep and heartfelt gratitude," Johnson wrote. "Ms. Kardashian, you are quite literally helping to save my life and restore me to my family. I was drowning and you have thrown me a life jacket, and given me hope that this Life jacket I'm serving may one day be taken off."

Although Trump and Kardashian reportedly discussed Johnson's case on Wednesday, the White House has been tight-lipped as to whether the president intends to grant her clemency. But in an interview with Mic, Kardashian said that she'll "do whatever it takes to get her out," and said that she intends to fight for other inmates' freedom as well.

“Where I’m at in my life right now, just like, to go and spend my money buying material things just doesn’t satisfy me the way that it used to,” Kardashian said. “To save someone’s life and do that once a year, then that would make [my] heart fuller.”