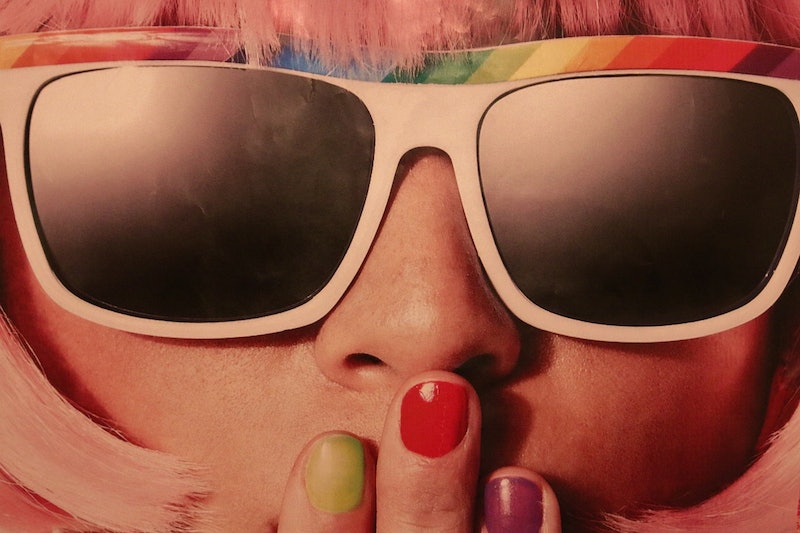 I sometimes feel like I was born too late, and would fit in better in 1970s — a decade of experimentation, indulgence, fabulous fashion, questionable home decor choices, and epic music. However, this Twitter account of weird food in the '70s has me rethinking that notion. I'm not sure if it was the over-indulgence of everything, or an affinity for experimentation, but whatever made people in the '70s decide shag wall-to-wall carpeting and wood-paneled walls were stylish also caused them to think that recipes like sauerkraut chocolate cake were a good idea.

If you thought that vintage doughnut salad recipe was a standalone phenomenon, think again. The Twitter account '70s Dinner Party has unearthed real, and somewhat nauseating, recipes that people actually came up with, cooked, and served to family, friends, and guests — probably while listening to David Bowie in their wood-paneled dining room. They did have good taste in music; they just had terrible taste in food.

Apparently the '70s was a time when everyone felt empowered to become a mad kitchen scientist, which seemed to involve taking foods that are least likely to complement each other and mixing them together in the same dish. Many of the '70s recipes involve things that should never be made with fish, desserts that include Spam, strange things made out of raw meat, and numerous recipes that include the word "surprise."

Personally, I don't like surprises, especially when it comes to food. Any dish that has the word "surprise" in the name is not something anyone should willingly put in their mouth. If the ingredients weren't gross, why would it need to be called a surprise? Like this Crusty Tuna Surprise.

Surprise! This "meal" involves corn flakes, soup, rice, and tuna layered on top one another, and it sounds suspiciously like that terrible meat dessert Rachel made on Friends for Thanksgiving when she accidentally got the pages of her cookbook stuck together and combined two recipes. I can forgive her because that was a mistake. But, Crusty Tuna Surprise is intentional, as is Baked Bone Marrow Surprise. For the love of God, why?

While Millennials are often shamed for their love of avocados, at least they're not participating in this abomination. If you really love avocados you might want to look away from this one.

The '70s "experimentation" is likely also responsible for so many recipes involving making the food look like it has a face, like these super creepy clown cupcakes. You can make these in honor of the movie IT or to eat while you watch American Horror Story: Cult.

You could actually have a '70s potluck for Halloween 2017 where you instruct all of your guests to bring a dish with a face to share. And, "with a face" does not necessarily refer to animal based foods.

I think I just threw up in my mouth a little. But, this is not even close to the worst example of face food. Before Americans understood sushi there was this.

An example of something that should never be done with meat.

Has anyone actually ever eaten one of these jello surprise dishes? I feel like anything that comes in a jello mold is shoved to the side and thrown away at the end of the night.

Hopefully the child who was served this cake on their birthday has recovered, though they probably now avoid lambs completely.

I'm not sure if these are fried frogs, or chickens dressed up to look like frogs. But, hey, let's all agree not to eat foods that are wearing fake eyes.

The strange things people felt compelled to do with meat in the '70s makes Lady Gaga's meat dress, which has been taxidermied and is on display at the Rock & Roll Hall of Fame, seem completely normal. Warning, the next series of photos may be disturbing to some viewers.

If the ground beef pig head doesn't shock you, then you're ready for this raw, ground beef three tiered wedding cake.

Or this inside out, ground beef tartare cake-sandwich thingy. I'm not sure what the fascination with ground beef was, or the aversion to cooking it. But, you probably don't want to give the nice people who came to celebrate your marriage food poisoning. If that is your intention, then this "wedding cake" should do the trick. If you're still reading because you love all things bizarre, these next recipes will probably put you over the edge. My apologies in advance.

Fritos, prune, and whip are three words that should never be in the same sentence.

And, whomever dreamt up Tuna On a Raft should have their recipe-writing privileges revoked immediately.

As far as food-trigger words go, "loaf" is now the new "moist." I am never again eating anything in a loaf.

OK, nothing should go inside of gelatin, except liquor. Never vegetables.

Peanut butter potato salad for the win! Why would anyone combine peanut butter, mayonnaise, and vinegar unless it was a for a punishment? Perhaps this was the "bad kids" salad parents served in the '70s when the kids were misbehaving. It was likely served alongside these prune kebobs just to make sure you spent the entire night on the toilet.

Seriously, I think you've had enough. But, if your weird-food threshold is higher than mine, '70s Dinner Party can keep you busy for hours. If you really want to commit, drop the needle on a retro disco record while wearing a vintage velour shirt and polyester bellbottoms. Though, you might wish you had amnesia after your finished with your '70s Twitter food tour. Don't say I didn't warn you.