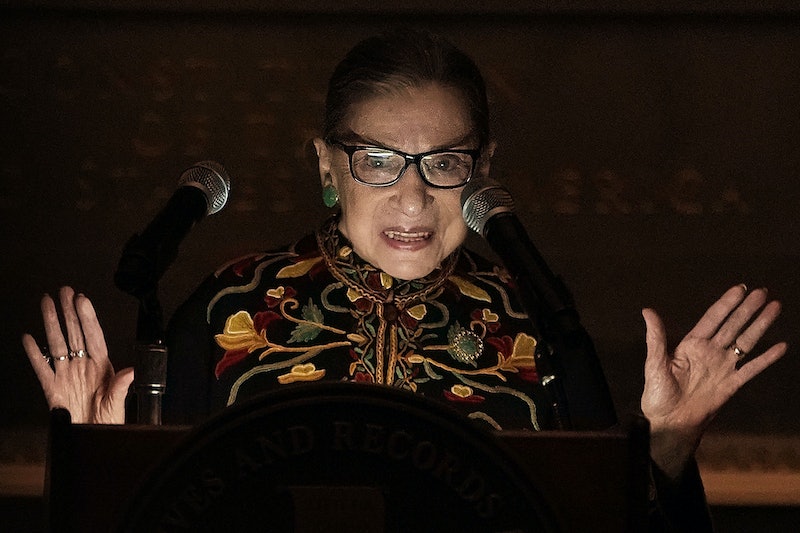 While some may opt to take a few sick days to rest and recuperate after being hospitalized, Notorious RBG is undecidedly not some people. In fact, this update on Ruth Bader Ginsburg proves the Supreme Court justice is as strong as ever.

According to the Associated Press, Ginsburg was already up and back working just two days after undergoing surgery to remove cancerous growths. Supreme Court spokesperson Kathy Arberg told the news outlet that while Ginsburg was still hospitalized as of Sunday, the Supreme Court justice was working from her room at New York's Memorial Sloan Kettering Cancer Center.

Ginsburg underwent a pulmonary lobectomy on Friday, where doctors removed two malignant nodules from one of her lungs. According to The New York Times, the malignant nodules were discovered during tests conducted back in November when Ginsburg was treated for fractured ribs she'd obtained when she fell in her office.

In a statement released shortly after Ginsburg came out of surgery, Arberg reported that the Supreme Court justice was "resting comfortably," but was expected to remain in the hospital for a few more days. At the time, Arberg said "there was no evidence of any remaining disease" following Ginsburg's pulmonary lobectomy and no additional treatment was planned. "Scans performed before surgery indicated no evidence of disease elsewhere in the body," The New York Times reported Arberg said.

In fact, Ginsburg's hospital stay hasn't appeared to stop the Supreme Court justice from participating in crucial court votes. According to NBC News Connecticut, Ginsburg voted Friday from the hospital — before undergoing surgery, that is — to block the Trump administration from enforcing and implementing its recently proposed asylum restrictions. According to the news outlet, Ginsburg was the deciding vote as the court ruled 5-4 against the Trump administration.

Despite her vote against his asylum ban, Trump wished Ginsburg a "full and speedy recovery" on Twitter on Friday.

But Friday was not Ginsburg's first brush with cancer. The Supreme Court justice has overcome early stage colon cancer in 1999 and pancreatic cancer in 2009. Ginsburg has also suffered broken or fractured ribs at least twice, once in 2012 and then again after a fall in her office in November. In 2014, The New York Times reported that the Supreme Court justice underwent a coronary catheterization in which doctors placed a stent in one of her coronary arteries after she reported feeling "discomfort" during routine exercise.

Despite it all, Ginsburg is reported to have never missed arguments in the 25 years she's been on the court, according to the Associated Press. While it's impossible to predict the future, Ginsburg has previously told The New York Times that she'd stay on the Supreme Court "as long as I can do the job full steam."

According to NBC News, it has not yet been announced when Ginsburg will be discharged from the hospital. The Supreme Court is, however, not scheduled to meet again until Jan. 7, giving Ginsburg plenty of time to recuperate.