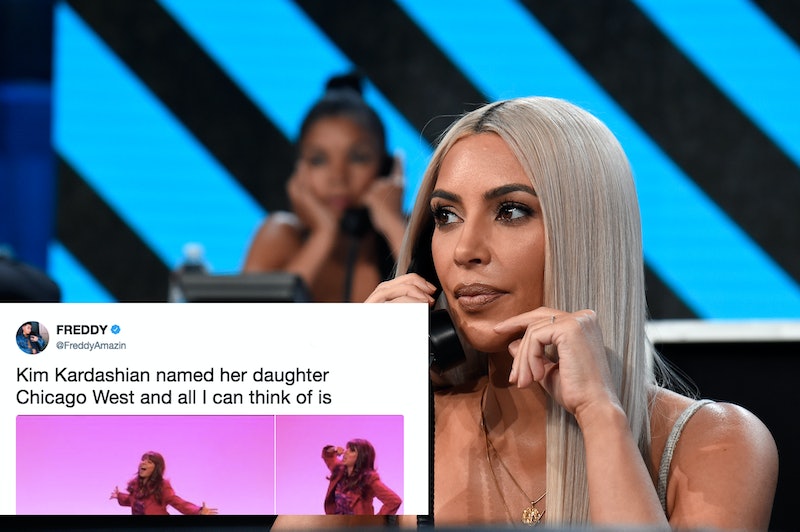 The Victorious fans came out of the woodwork on Friday afternoon when Kim Kardashian announced that Chicago West was the name of her third baby. You see, the meme of the Chicago song from Victorious became everyone's favorite way to react to the unexpected baby name, but there are also a whole lot of people who don't seem to know where the reference if from. Specifically, that the meme comes from Trina Vega's one-man show about Chicago ("Chicaaaaago!"). So, for those of you who are wondering where that gif or clip is from, and what the context is, take a seat and get ready to learn. And for those of you who watched one of Nickelodeon's finest shows, get ready to see your fellow fans bring the laughter.

First, the origin of the meme. The scene took place in "Jade Dumps Beck", the fifth episode of the first season of Victorious. The A-Plot of the episode is obviously that Jade (Elizabeth Gillies), sick of all the women Beck (Avan Jogia) doesn't discourage from flirting with him, dumps him and then almost immediately wants him back. But the B-Plot of the episode is about Trina!, the one-woman play put on by Trina (Daniella Monet), that Robbie (Matt Bennett) is forced to review. It's horrible, so, knowing Trina's violent temper, Robbie tries to get out of writing anything about it; eventually, he reviews it as if it were an intentional comedy, and Trina performs her bad play to a packed house. You can watch the play excerpts in all their glory below.

The B-Plot of this show wasn't as memorable to many fans as the A-Plot, but it's really having a revival now. As soon as Kardashian announced her baby name was Chicago, Victorious fans couldn't help but remember Trina's infamous song and make jokes about the comparison.

1. The Memory Was Immediate

We're all hoping that Kardashian summons Chicago into rooms after she learns to walk by singing this exact song.

Kind of offended that she didn't announce it this way, to be honest.

Move over, Kanye. This isn't about you.

Can we help it that the song is so darn catchy?

The true theater legend in town is Trina Vega, and even Kim Kardashian is a fan. Probably.

Kardashian maybe should have seen this coming.

Let's wait a few years and see what happens.

Sorry, Kim K, but the nickname is pronounced "She" not "Shy."

11. Somebody Owes Trina An Apology

Didn't she trademark that word when she brought down that house?

SHE-cago is the only pronunciation we accept.

It's a real bonding moment for the internet right now.

15. Are You Not Entertained?

Even as a fan of the show, I wasn't prepared for all of the Trina Vega jokes, but we're all living for them now.

At the end of the day, even though Victorious came at a time when many millennials had outgrown watching Nickelodeon shows, it's clear that it still had a huge impact on its audience. On this, the day Kardashian revealed her third baby name, we are thinking not of Beck and Jade and the first time in the series that they broke up. We are remembering Trina! The One-Woman Show and giving Trina Vega the credit she deserved for being such an icon that not even Chicago West could compete with her notoriety.