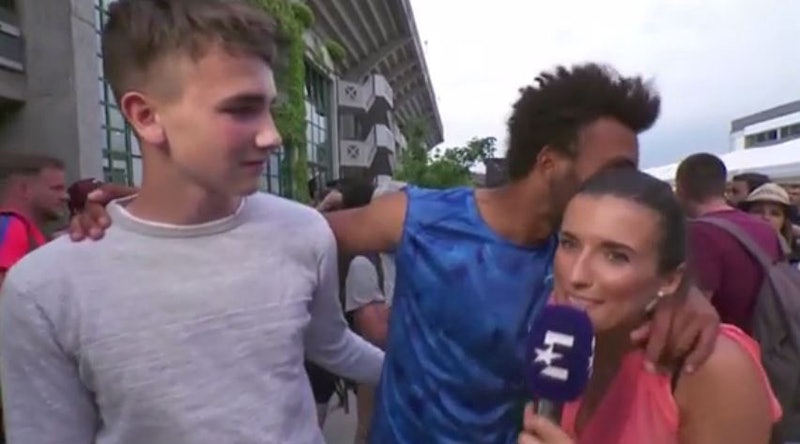 While live on TV during a post-match interview on Monday, a tennis player repeatedly tried to kiss a reporter without her consent. After his loss in the French Open, 21-year-old French tennis player Maxime Hamou continuously tried to kiss and put his arm around Maly Thomas, a Eurosport journalist, while she was interviewing him during Eurosport’s program Avantage Leconte. Because of the incident, Hamou has been banned from the tournament and had his accreditation revoked.

A video of the incident was posted on Twitter after it aired on TV. In the 44-second clip, Hamou can be seen wrapping his arms around Thomas’ neck and shoulders and trying to kiss her multiple times. Thomas is visibly uncomfortable and repeatedly tries to push him away, all while attempting to interview him on live TV. Equally unsettling is the panel of Eurosport commentators in the studio who laugh and clap as Hamou continues to harass Thomas. The video ends with Thomas trying to pry Hamou’s arm off of her.

In an interview with HuffPost France, Thomas described the incident as “frankly unpleasant,” which is putting it gently. She also added, “If I hadn’t been live on air, I would have punched him.”

In a statement made on Tuesday, the French Tennis Federation (FTT) condemned Hamou’s actions and announced the revocation of his accreditation. Translated, the statement reads, “The leadership of the tournament has decided to remove the accreditation of Maxime Hamou, following his reprehensible behavior with a (female) journalist, yesterday, Monday, May 29.”

Hamou has since apologized for the incident via a statement posted to his Facebook page Tuesday afternoon. The translated statement reads:

“I offer my deep apologies to Maly Thomas if she feels hurt or shocked by my attitude during her interview. I have just spent a magnificent week here at Roland Garros living my most beautiful emotions as a tennis player, and I expressed my overflow of enthusiasm awkwardly towards Maly, who I know and respect sincerely. I'm still learning every day from my mistakes to become a better tennis player and a better person.”

Henri Leconte, one of the Eurosport commentators who laughed and shouted “fabulous” during the live interview, has also issued an apology for the way he reacted to the incident. “I want to make it clear that we do not endorse this type of behavior. Maly is a great professional who deserves an apology,” Leconte said in his statement. “Our live response was also not appropriate, we should have intervened quickly. We apologise to our viewers.”

Roughly translated, the above tweet says that in a normal world, Hamou would be in court for sexual assault and the reporters who laughed would be removed from TV.

The sexual harassment of female sports reporters is all too common, and often happens without consequence. Women are particularly underrepresented in sports media, which means they're often severely outnumbered by men in a locker room or at a press conference. Regardless of what anyone says about “locker room banter,” sexual assault is not situational, and sexual harassment of any kind should not be tolerated.

The statistics on workplace sexual harassment reveal and all-too-common reality. Overall, one in three women are sexually harassed at work. An estimated 75 percent of workplace sexual harassment goes unreported. Our culture remains widely unclear about what is and what is not consent. To be clear, repeatedly trying to touch and kiss a person without asking when that person is displaying obvious discomfort is not consensual. Trying to touch or kiss a person without asking is not a consensual act, period.

The FTT’s statement and banning of Hamou sets a precedent for what kind of actions are inappropriate, what they as an organization will not tolerate, and what we as a society should not tolerate. This kind of swift condemnation in addition to better, more widespread education on consent will help establish a culture in which sexual assault of any kind is not OK.