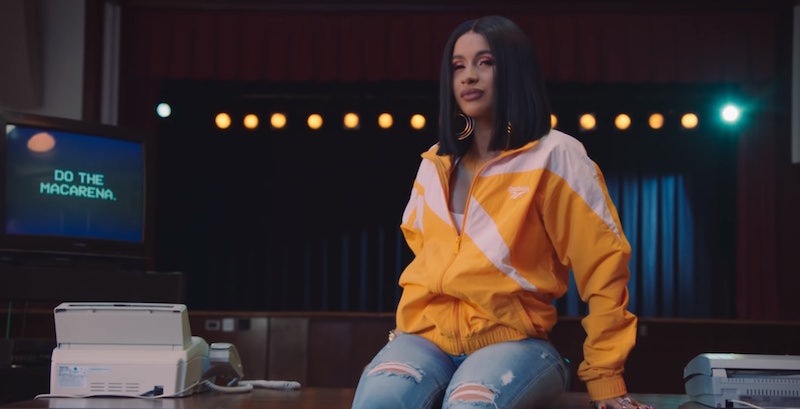 She's the queen of hip-hop... and slap on bracelets. It turns out that Cardi B's knowledge of '90s slang is not only very entertaining, but also super impressive. Because of Cardi's rapid success, not only in business but as being a hands-on mom to Kulture, it's easy to forget the superstar is only 26. But in this new video, "Reebok Classic Presents: Cardi B vs. The 90s," it's clear she's a '90s baby at heart and doing millennials proud every step of the way.

In the video, Cardi takes on a series of '90s-themed challenges, and she crushes most of them. First she proves that she has the skills to put 25 slap bracelets on in just 20 seconds before throwing it back to the 1993 song "La Macarena" — iconic dance moves included. The one place where the "Bodak Yellow" rapper draws the line? Sending a fax, but really, who actually remembers how to work a fax machine anyway?

While she jokes she was practically "saying goo goo gaga" in the '90s, her slang knowledge from the decade was also put to the test and, well, she kills it. To prove how on point she was, here are Cardi's definitions of some of the most memorable slang terms from (arguably) the greatest decade ever:

"Talk to the hand because my face doesn't wanna see ya, it's like, 'I'm ignoring you.'"

"My partner, my homie, my roadie, my friend, my dog. That's my home skillet biscuit, we grew up together."

"Hoopty just means like a busted-ass car. You're talking sh*t about my hoopty, but you're walking though."

"Wack means, like, you trash, you garbage. Go do it again. 'Cause that was wack."

The last time fans got a slice of Cardi B's younger days was last summer, when a photo of the rapper at 5 years old went viral as a meme. The picture captures a little Cardi, with one hand on her hip and a reluctant smile as she poses for the camera. It spread like wildfire, as Twitter users posted the picture making up captions that would be a fit for what Cardi was thinking.

Although she wasn't even 10 before the '90s were over, the decade clearly holds a special place in Cardi's heart. Last year, Cardi B and Bruno Mars released "Finesse (Remix)" music video, which is '90s through and through. From the style to the sound, the video brings listeners right back to the '90s glory days, drawing inspiration from the iconic sketch show In Living Color (which premiered on Fox in 1990).