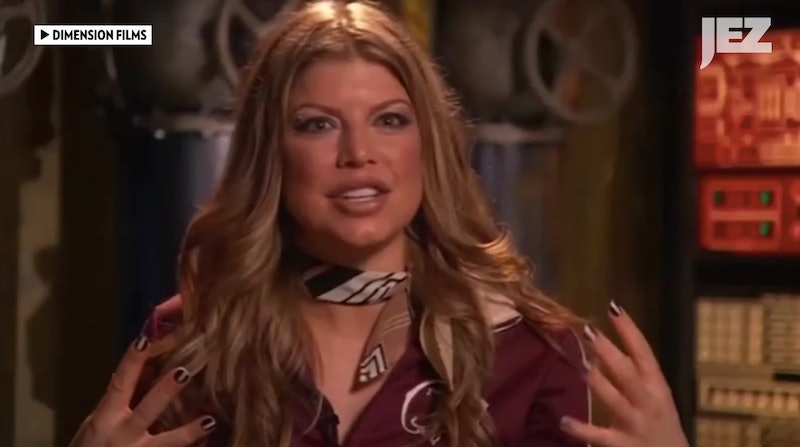 Quentin Tarantino has been making headlines for a lot of reasons lately, and the latest is a strange one: svideo resurfaced of Fergie claiming that Tarantino bit her while on set in 2006. This is the second time an old Tarantino incident has resurfaced recently, after the 2003 Howard Stern interview of him defending famed director Roman Polanski's sexual relationship with a then-13-year-old girl was brought back to light. (On Thursday, Tarantino apologized to Samantha Geimer for his words.) But the Fergie interview, while seemingly innocuous at the time, is worth talking about today. (Bustle has reached out to Tarantino for comment on the incident and interview, but did not receive an immediate response.)

Update: On Feb. 8, Fergie responded to the resurfaced video in an interview with Entertainment Tonight, saying:

“That was a long time ago, first of all. First off, I just wanna say I stand with victims everywhere, no matter what genre, race, gender, age. I stand with victims, period, and I don’t want to take away from anyone’s story. That just wasn’t my story. We were just kind of having banter like I did with the Black Eyed Peas on tour, and we were having a little bit of fun.”

Earlier: The video, published by Jezebel on Feb. 8, comes from special bonus footage on the 2007 horror Grindhouse DVD, in which Tarantino and director Robert Rodriguez shot and directed a double feature — a zombie film and a slasher film. Fergie starred in the Rodriguez-helmed Planet Terror, a film about a group of Texans trying to escape a zombie attack. And though Tarantino helmed the other half of the double feature, slasher film Death Proof, he happened to be onset for the incident.

In the bonus footage, Fergie claimed that, while in the midst of practicing the scene where the zombies attack her, Tarantino, who seemingly stepped in for one of the zombies, "really got into it" and bit her. "He’s doing the whole run with me, so it’s great," she explained. "So I look over and see Quentin, and I have to kind of visualize this zombie-esque character." Fergie goes on to say how Tarantino was "so into being this creature" that they had to keep running back the scene because he was making noises.

Accompanying Fergie's dialogue are clips of Tarantino in full on zombie mode, and he does appear to be having a lot of fun with the role. But listen a little closely, and you can hear Fergie laughing and saying "f*cker, get off of me." The singer continued, saying, "So I’m doing the scene, right, and he starts biting me," and, after, a clip of the multi-talent showing just where he did the damage follows. It should be noted that the footage comes off as fun and playful, and Fergie doesn't appear to be in the least bit of distress after the incident.

However, with conversations surrounding men in Hollywood abusing their power picking up steam in 2018, the 2006 footage is uncomfortable to watch. For example, in a recent interview with the New York Times, Kill Bill star Uma Thurman detailed an event where Tarantino made her perform in a stunt that resulted in her having a "permanently damaged neck and my screwed-up knees." (The director has apologized to Thurman since, calling the incident the "the biggest regret of my life.")

Thurman said that Tarantino didn't like to hear "no," just as any other director in Hollywood wouldn't, and she claimed that he insisted that she drive a car, which Thurman refers to as a "deathbox," 40 miles per hour down a winding road. She objected, but said "[Tarantino] was furious because I’d cost them a lot of time. But I was scared." (Despite his apology, Tarantino disputed Thurman's version of events, claiming that he asked her calmly and was never angry, and that she agreed because she trusted him.)

Regardless, as you can see from the footage (that allegedly took years for Thurman to obtain), she ultimately drove the car, hitting a tree, and making for an extremely disturbing crash.

Aside from the horrific crash on the Kill Bill set, Tarantino is also reported to have participated in scenes in which he strangles female actors. Thurman recalled a time where Tarantino strangled and spit on her in the same NYT interview, and, in a separate interview on the Graham Norton Show, Tarantino explained how Hollywood's lack of believable strangling scenes led him to performing the stunt himself on Diane Kruger while shooting Inglourious Basterds.

"When somebody’s actually being strangled, there’s a thing that happens to their face, they way they turn a certain color, their veins pop out," he said, before adding, "So I just said to her, what I’m gonna do is I’m gonna be the hands and what I’m gonna do is just strangle you." Tarantino said that Kruger trusted him in this crucial moment, making for the director getting the satisfying and "believable" shot he sought out to get. (Kruger came to Tarantino's defense in a 2018 Variety interview, saying that it was a "pure joy" to work with him).

Ultimately, the resurfaced video may be nothing, and Fergie seems more amused than anything else. But by taking time to acknowledge how unsettling these stories are, even in hindsight, we're at least having the conversations that will get us closer to ensuring the safety of everyone in Hollywood.