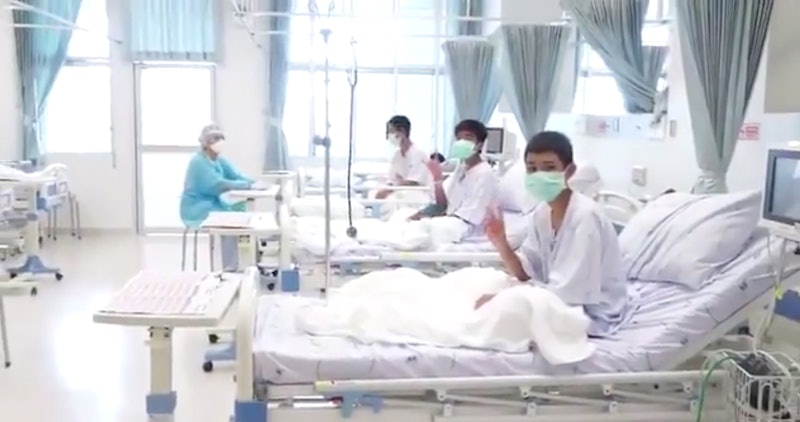 After 18 days, 12 Thai soccer players and their coach were rescued from the flooded cave where they had been trapped with little food and low oxygen levels. Now, the world's attention has shifted to the long recovery process that the boys have ahead of them — but the first video of the Thai soccer players following their rescue appears to be promising.

On Wednesday, the Thai government's Incident Press Command Center released a brief video showing the boys wearing surgical masks and tucked in hospital beds in the northern Thai city of Chiang Rai. As the camera pans across the room, the boys wave and flash victory signs, suggesting that they are optimistic despite the ordeal they've undergone.

According to CNN, each of the boys on the team are between the ages of 11 and 16, and their coach — Ekkapol Chantawong — is 25. Tongchai Lertvirairatanapong, Thailand's health ministry inspector, told reporters on Wednesday that the boys were in "good condition," but that each had lost an average of 4.4 pounds while stranded in the cave.

The team, known as the "Wild Boars," was first trapped on June 23, when monsoon rains flooded the Tham Luang cave they were exploring after soccer practice.

Although the entire team has since been rescued, USA Today noted that their road to recovery will likely be extensive. The boys were initially quarantined after being rescued, with two receiving lung infection diagnoses, three being treated for minor cases of pneumonia, and another contending with an irregular heartbeat. CNN reported that the boys would likely be discharged in a week but will need to recover for an additional 30 days, citing a doctor in Chiang Rai.

Lertvirairatanapong said at a press conference following the boys' rescue that they were able to survive because they were able to access water to drink, even though they didn't have any food to eat in the nine days before they were found. As young athletes, the boys' physical recovery will likely not be too prolonged, USA Today reported, but they may have to contend with more long-term emotional and mental trauma.

According to The Independent, experts have suggested that the boys may face post-traumatic stress disorder and flashbacks to their ordeal in the cave. However, The Independent and USA Today have both cited experts as saying that the boys being together in the cave, as a community, may have helped them survive and could help them recover going forward.

According to BuzzFeed, the boys' parents visited their sons in the hospital on Wednesday — a full day after they were rescued. However, they were reportedly not permitted to enter their sons' hospital rooms, for fear of infection. Nonetheless, video footage shows some of the parents in tears, and many of them expressed relief and gratitude.

The effort to rescue the Wild Boars from the cave took place in three parts. According to the AP, a team of Thai and international divers rescued eight of the boys on Sunday and Monday. The final four boys and their coach were rescued on Tuesday — and just in time, CBS News reported, because the main water pump in the caves malfunctioned hours after they were evacuated. As a result, water flooded the cave and might have rendered any further rescue missions unsuccessful.

Master Sgt. Derek Anderson was one of the members of the U.S. Air Force involved in the rescue efforts. During a Wednesday appearance on the Today Show, Anderson and his colleague — Maj. Charles Hodges — said that the rescue mission had been extremely dangerous, and that they feared casualties. Anderson ultimately lauded the boys' bravery during their extensive time in the cave.

“I think we can all be proud,” Anderson said. “Those boys are heroes. They were extremely brave to have to go through something like this. I’m really glad that everybody, at the end of the day, can walk away with a smile, to include the rescuers, the families and the boys.”