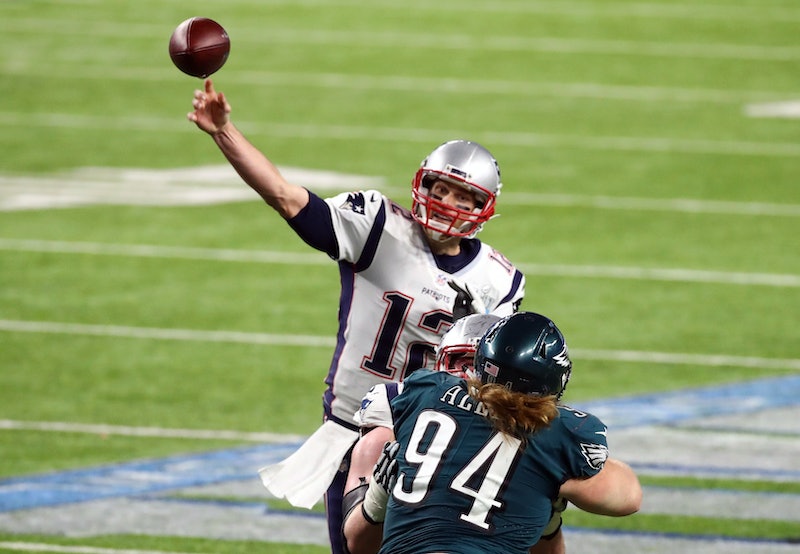 In a play that thrilled Philadelphia fans Sunday night, the New England Patriots' star quarterback Tom Brady fumbled the ball, allowing Eagles' defensive end Derek Barnett to recover it with just two minutes left in the game. The play gave the Eagles a necessary lead on the Patriots, making the game just as close and nerve-wracking as it was in 2017. Brady's mistake likely lost the Pats the game, which the Eagles ended up winning, 41-33.

This crucial moment divided fans on Twitter. Some people really enjoyed watching Brady, who has won five Super Bowls, mess up. Meanwhile, Pats fans cringed watching their star player make that big of a mistake at such an important moment in the game.

Philadelphia fans rejoiced online after winning their very first Super Bowl championship. And some people pointed to Brady's fumble as the defining moment of the game. While Brady set the Super Bowl record for passing yards in a game, his one mistake had a huge impact on the final score.

Not only was the Pats' star player having an off night, but the Eagles' quarterback Nick Foles had an exceptional game. This was particularly surprising to some people, because Foles isn't a starter for the Eagles. Instead, he took over when starting quarterback Carson Wentz tore his ACL in December 2017.

And it wasn't just Foles that had a good night. The entire team stepped it up and brought its A-game on Sunday, pulling off an impressive trick play, where players threw to Foles for the touchdown. Brady's fumble was even more shocking to Pats fans because the quarterback is known for making epic comebacks at the eleventh hour. At the 2017 game, the quarterback helped the Patriots make a 25 point comeback in the last quarter. It was one of the largest comebacks in Super Bowl history.

A lot of people thought that history was going to repeat itself, and that Brady would lead the Pats to victory at the last minute once again. Only, his fumble changed everything and that didn't end up happening, much to the dismay of New England fans.

Just as Brady was about to throw the ball, Eagles defensive end Brandon Graham made the first sack of the game at the perfect moment. Not only that, he ended up knocking the ball loose from Brady’s grip and launching it directly into the hands of Barnett, who ran with it, successfully recovering the ball for his team.

The Eagles went on to kick a field goal, extending their lead on the Patriots. They won the game by 8 points, and many Philly fans are crediting Graham for the monumental win. People started tweeting that Graham made Super Bowl history by sacking Brady.

Despite suffering a loss, Brady isn't discouraged. Even before going into the 52nd Super Bowl, the 40-year-old NFL star said that he plans to play again next year. "You're gonna see me playing football next year," he said during an interview on Westwood One radio. "I don't envision not playing."

He did acknowledge, however, that a lot of people want him to retire. That's probably because he's one of the most successful quarterbacks in NFL history. "Why does everyone want me to retire so bad? I'm having fun, the team is doing good," Brady said. "I know I'm a little bit older than most of the guys, but I'm really enjoying it. ... So I'm not thinking about retirement."

While tonight's fumble was a huge hit for Brady, Twitter continues to have a field day with the moment. Expect plenty of GIFs of Brady's mess-up in the near future.