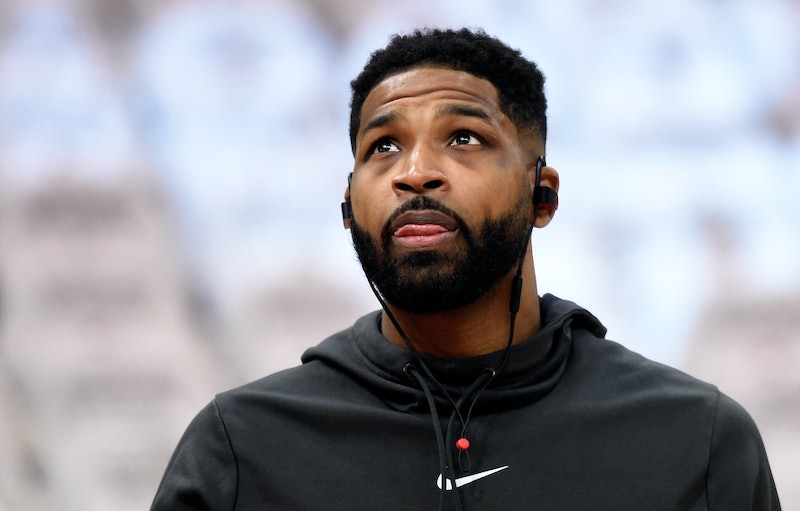 One day after Khloe Kardashian spoke out for the first time about her decision to stay together, Tristan Thompson posted an affectionate Snapchat video with True, their baby daughter. In the selfie recording, the 27-year-old father peppers his 2-month-old baby daughter with kisses.

“Baby True! Baby True! Daddy loves you!” he sings out in the Snapchat video to his baby girl.

The doting display comes over two months after Thompson was reported to be cheating on 33-year-old Kardashian during her pregnancy. The Snapchat video is the second social media post from Thompson in just one week, following an earlier Instagram photo of the baller with True and his 18-month-old son, Prince, who is from a previous relationship.

After Kardashian's announcement, fans criticized her decision to stay with Thompson. Kardashian, in her usual spirited manner, didn't put up with it. “u have no knowledge of what goes on in our household or the enormous rebuilding this takes to even coexist,” Kardashian wrote to a Twitter fan who was “disappointed” in her decision to stay in a relationship with Thompson. “I’m proud of my strength. I appreciate your opinion and I hope you hold that same opinion to everyone else who has stayed in situations.”

True was born in Cleveland on April 12, according to Us Weekly, just a couple days after footage came out that showed Thompson seemingly "getting too close to other women." Bustle reached out to Kardashian's reps and Thompson's agent for comment on those reports. Still, the two seem to be in a relationship, as Us Weekly's source said the two are “fully back together” even as they grapple with the aftermath of the scandal.

“Tristan is loving being a father. Now that the season is over, he has been able to be more active in taking care of True. Tristan is up late at night, feeding the baby, helping her sleep, burping her, and he loves playing with her too,” a source close to the NBA baller told Hollywood Life.

Kardashian was quick to dispel a recent report about a "tense" dinner that she had with Thompson recently. She seems to address the press, saying that they would "make up anything" and that she actually had "a great night," revealing that she was at a birthday dinner for friends. She explains what may apparently have come off as unenthusiastic behavior by pointing out that "as a new mom, IM [sic] TIRED AF" and that being "out past 10pm is not where I'll have the most energy these days."

Thompson and Kardashian met when a mutual friend, Milwaukee Bucks point guard Brandon Jennings, set them up on a blind date. That relationship backstory was revealed in the Keeping Up With the Kardashians 10th Anniversary special. The two were first linked in the summer of 2016 after paparazzi spotted them partying together and touring a mansion in Beverly Hills. The couple then began to take vacations together, and on December 20 in 2017, Kardashian announced she was pregnant.

"My greatest dream realized! We are having a baby! I had been waiting and wondering but God had a plan all along. He knew what He was doing. I simply had to trust in Him and be patient," Kardashian had written to her Instagram followers. "I still at times can't believe that our love created life! Tristan, thank you for loving me the way that you do! Thank you for treating me like a Queen! Thank you for making me feel beautiful at all stages!"

Whatever challenges may lie ahead, fans are rooting for Kardashian and the strength she's relied on to get her through this time.