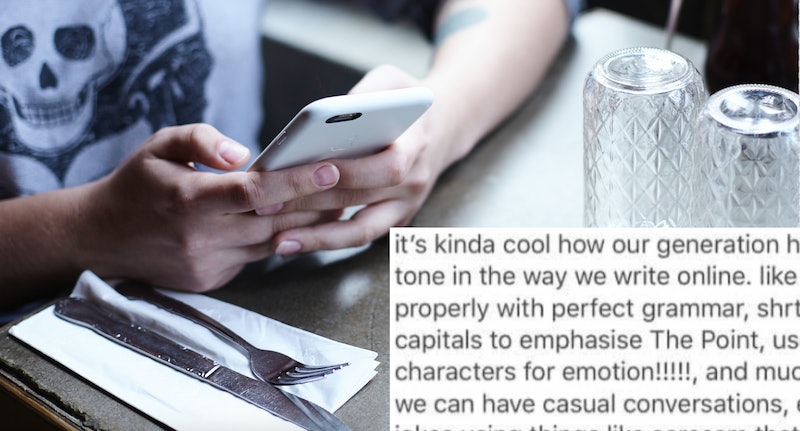 Millennials (and often Gen Xers and Gen Zers, too) are often derided by older generations for the way they communicate online and in text messages. The argument is that it’s not grammatically correct; therefore, it’s bad, wrong, and even an indication of the rapid decline of society and civilization as we know it. But as a viral tweet about how millennials use language demonstrates, that’s actually not the case at all. In fact, I’d argue that millennials’ use of language online is an indication that society and civilization are evolving­ — and that’s a very good thing, indeed.

The tweet comes from copyeditor Deanna Hoak, who posted a screenshot of a short thread from Tumblr on March 3. “It’s kinda cool how our generation has created actual tone in the way we write online,” the Tumblr thread begins. “Like whether we: write properly with perfect grammar, shrthnd everythin, use capitals to emphasise [sic] The Point, use extra letters or characters for emotion!!!!!, and much more — it means we can have casual conversations, effectively make jokes using things like sarcasm that’s usually hard to understand without context and much more.” Ultimately, concludes the user, “this ‘incorrect English’ has really opened avenues of online conversation that isn’t accessible with ‘correct English.’”

A second Tumblr user jumped in by— what else? — adding three hashtags: “#this is why attempts by the media to portray online communication by ‘millenials’ [sic] really frustrate me” is the first; “#because there are Rules okay” is the second; and “#like see that’s different to saying ‘there are rules’” is the third. Then, finally, a third user noted something their English teacher had said about this kind of language: “What my teacher was really floored about was that… we’re ‘native speakers’ of a whole new type of English.”

Said Hoak about the conversation in the screenshot, “My master’s was in sociolinguistics, and I absolutely see this as true.”

The sequence of Tumblr posts highlighted by Hoak aren’t new;they first arrived online in the spring of 2016. Two of the three original posts — the very first one from Rale and the final one from Diabolical-Mastermind — have since been deleted; however, the middle one from MaskedLinguist, which adds tags written and pegged to Rale’s post by SoaringSparrow to the main conversation, remains — and, y’know, since the internet is forever, the full sequence of posts is still frequently reblogged today.

And I think the fact that is still being passed around is a testament to how valuable the point it makes is. As a generation who conducts a huge amount of our communication in solely text-based formats, we’ve developed all of these style cues and new rules to make up for the lack of body language and tone — that is, this “incorrect”grammar isn’t something that developed out of laziness; it’s something that developed out of necessity. As Hoak put it in a later tweet, it’s “specifically aimed at conveying nuance in short and immediate written form.” Another user asked, “Would you consider it a digital dialect?”, which seems to be pretty close to the mark. “I like this term a lot,” Hoak wrote in response.

And, indeed, many other Twitter users chimed in to identify some of these new rules of online grammar — all of which are truly, truly fascinating. Here’s a look at a few: