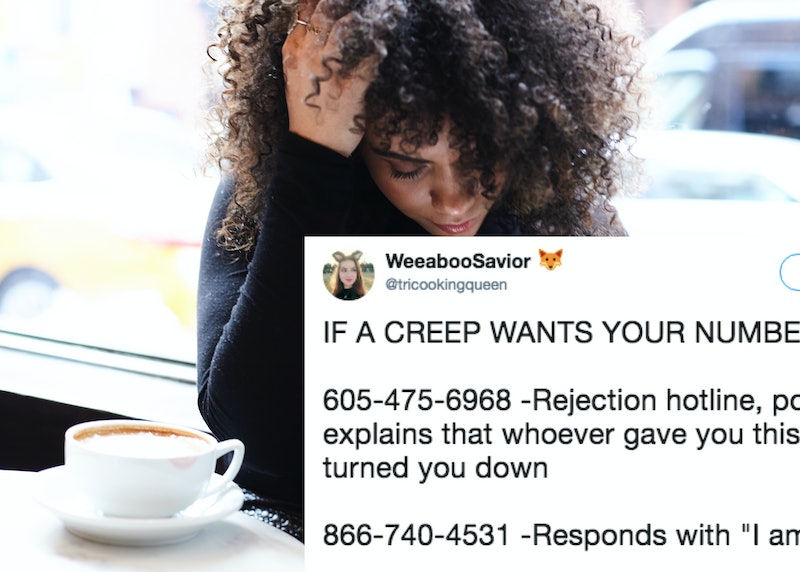 Many of us — women in particular — are all too familiar with what happens when you decline to give someone your phone number: If we’re lucky, they say, “OK, cool. Nice talking to you,” and leave you alone. Most of the time, though, they get insistent, angry, and threatening. But this viral tweet about what to do if a creep asks for your phone number might help: It provides a bunch of fake phone numbers which, when called, yield some supremely humorous results, while simultaneously keeping your actual contact information out of the hands of people who make you feel unsafe. While it’s true that we shouldn’t have to resort to giving out fake numbers when we don’t feel safe, the world we live in right now is such that having a couple of these in your proverbial back pocket can go a long way towards easing your mind and helping you escape from a dangerous situation.

The tweet was launched into the universe by @tricookingqueen on May 31 — and since then, it has spread far and wide, with 154,000 retweets and 257,000 likes under its belt. Simply titled, “IF A CREEP WANTS YOUR NUMBER,” it proceeds to list the number to a rejection hotline which “politely explains that whoever gave you this number turned you down,” a number which will respond to anyone who contacts it with nothing but the phrase “I am Groot,” a number which “only plays the John Cena thing” (more on that in a bit), and a number that plays the theme song to a beloved anime series. “RT to save a life!” the tweet concludes — which, sadly, is both a joke and not a joke at all. It is far from uncommon for men who are rejected by women to respond violently — or even kill the woman who told them “No.”

Interestingly, though, it seems that this tweet isn’t the first time this piece of advice has made the rounds; I actually traced what I believe is the original version of it back to a Tumblr post from 2015. Posted by a user going by the name kittensinsocks24 (an A-plus moniker if I’ve ever heard one), it included the rejection online and the “I am Groot” number, along with a few others — like the Easter egg phone number you get when you beat the video game God of War (and which Elon Musk apparently tweeted out once, only to have everyone think he had tweeted his own personal phone number) and the “Loser Line” run by a Seattle area radio station, which plays the messages left on it on air from time to time. A another Tumblr user added the John Cena line to that list in an additional comment.

Over the years, it seems that folks have adapted and revamped the advice occasionally, subtracting some numbers and adding new ones. I’m actually sort of surprised The Mary Sue’s rejection hotline number hasn’t been added to the mix yet — but, y’know, there’s still time.

Although these numbers are being shared in this context for serious reasons, there’s also a lot of humor in it—which, I would argue, is also necessary: It makes coping with the unsafe nature of our world a little bit easier. To that end, I am delighted to share that all of these phone numbers are real. Or at least, they were at some point in time, even if they’re no longer operational now. Here’s the current status of each of the numbers in both the Tumblr and Twitter versions of this post, as of this writing (June 6, 2018, in case you’re reading this at some point in the future):

The Rejection Hotline was originally set up in 2001 — yes, almost 20 years ago — as part of the 200-number-strong Humor Hotlines network. The Humor Hotlines folk ended up having to sell off the numbers in 2012 and shut down in 2013; however, as of 2015, they’ve been making a comeback as part of the Whatever Network.

The first time I dialed this number, I actually got a busy signal; it worked the second time, though. If you just want to hear what the message is without calling it yourself, you can listen to it via the video embedded here.

According to Tech Crunch, this number was set up as a gag by New York-based app developer Ricky Robinett in 2014. It wasn’t for calling, though; it was an SMS text bot that would respond to anything you texted it with the phrase “I am Groot.” Alas, when I called it, I got a “The number you have reached is not in service” message — and when I texted it, I got no response at all. Shame, really; it’s a hilarious idea. (Although — spoilers for Infinity War at the link — this Twitter user has a point.)

The first God of War game was released back in 2005 — and when you beat it, you were treated to a delightful Easter egg: A phone number you could call to hear player character Kratos congratulate you on your victory. Or, well, one of two phone numbers; both had a slightly different message. The one in the Tumblr post plays the message heard in the video here — and hey, guess what? The number still works! If the person who won’t leave you alone until you give them their number happens to be a gamer, though, they might recognize this one, so deploy with caution.

Set up by Tumblr user bizarrodf in 2015, this number — the last four digits of which spell out CENA — used to play the audio heard in this video here when it was called. Alas, though, an update to the original post noted later on that Google eventually shut the number down.

This number was apparently created by a Twitter user going by the name @zchrr in 2014. They noted in a later tweet that they had to shut it down because it got too expensive. Alas, I couldn’t confirm the actual song used (since, y’know, it’s no longer operational), but I think it was the one embedded here; it’s called “A Cruel Angel’s Thesis” and played during the opening of the anime Neon Genesis Evangelion.

Since 2014 (or at least, that’s as far back as the archives for the segment go), the Seattle radio station Movin 92.5 has run what they call the “Loser Line”: A phone number people can give out when someone asks for their number and they don’t really want to give it to them. If the people who call it leave a message, those messages will periodically get played on air during the station’s morning show. They’re also available to list to via Soundcloud.

Does it suck that we so frequently have to resort to doling out fake numbers in order to keep ourselves safe? Yes. So, y'know, while we're stuck in a world where this is a necessary evil, we may as well have a little fun with it, right?

And, to be fair: Who wouldn't want to have a phone conversation with Groot?