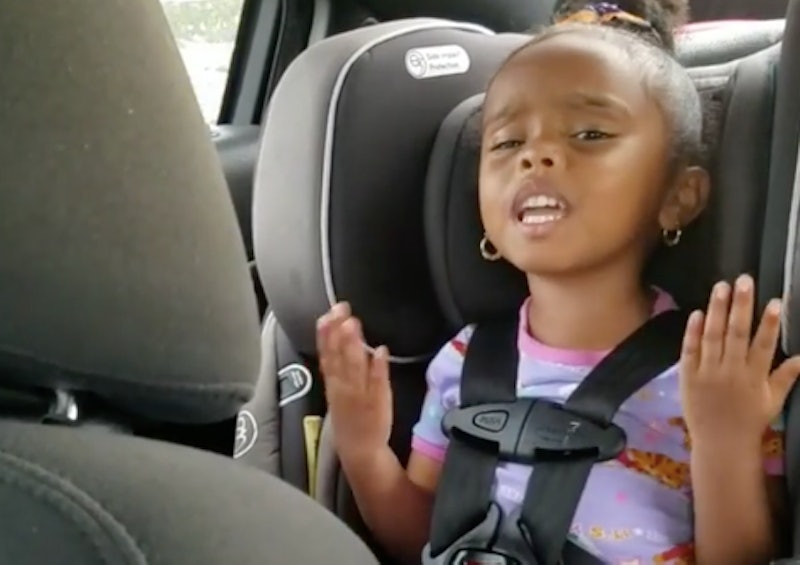 At this point, if you were to make a list of all of the moments thus far in politics that are either very painful, hilarious, or a combination of the two, you'd have quite the list. Between biweekly alleged scandals having to do with Russia, approximately 6,000 handshake debacles, and the nail-biting votes on AHCA, I wouldn't blame you if you just decided that you'll come back to your "engaged and informed on the issues"-self in 2018. This is why five-year-old Taylor's viral rant about the government from the backseat of a car that basically said, "What the heck is going on, and where is Obama?" is exactly what it can feel like when you're working toward a cause for equality — minus the Obama part. (Unfortunately, as adults, we understand where he went all too well.)

So what made a lot of social media users go, "RT Taylor, we feel you"? The art of what some over-quoted Greek philosopher or a Michael Moore movie makes you do: question everything.

Young Taylor, who launched into a few questions that still need answers, is exactly the sort of questions you should ask yourself when you start to engage with social activism. The same way Taylor's questions became parts 1-3, are some of the first steps to really stay #woke. When it can all seem like a flurry of hashtags, debates and entertaining "all sides" of the argument, Taylor offers some clarity in a series of Instagram videos dropping gems.

The fact that Taylor could fit so many solid points between few breaths is impressive to start. However, there's more here to ask yourself.

How exactly did we get here?

This is what makes Taylor's mini rant so relatable. Her questions get at why change is happening while adding gestures and eye rolls that are completely precious. Applied to your own search for truth, to anything you have to start at the root. If you're talking about why the Keystone Pipeline will continue construction or how Black Lives Matter became a movement where women are recognized as founder and leaders, there's a history. When trying to assess what the movement needs or does not, it doesn't hurt to know your history. Also, this will keep you from looking like a complete doofus in the comment section of your social media posts.

Who are the perceived leaders and why?

Taylor compares the "winners" and "losers" in the last presidential election and I'd say she already has an eye for spotting gender discrimination and more nuanced arguments about why Hillary lost. Just like in the election, it never hurts to challenge the leaders of that movement — and sometimes asking ourselves why they are in the positions they're in, and who put them there. For example, why do representations of the LGBTQ+ movement often position white members of the community as leaders versus POCs? Or why Martin Luther King is seen as a civil rights hero, but Corretta Scott King, an activist and hero in her own right, is seen as just his supportive wife? This can not only create a better critique, but also your checking privilege to make space for others.

When the movement wins, what are you winning?

Taylor put it bluntly when she said "What does winning mean?" — it's certainly worth asking. Putting your shared vision with the moment in context is key. Sometimes it can even help you realize just how much the cause affects the people around you. This can also help you see how visibility, representation, and again, acknowledging privilege can contribute to a better movement.

Just like that, a very bright five-year-old just shed some light on just how to push back on issues you can often feel tempted to defend against critique. But just like Taylor, sometimes you have to get a place where you can acknowledge that there is a quite a bit of explaining to do and add a good eye roll.