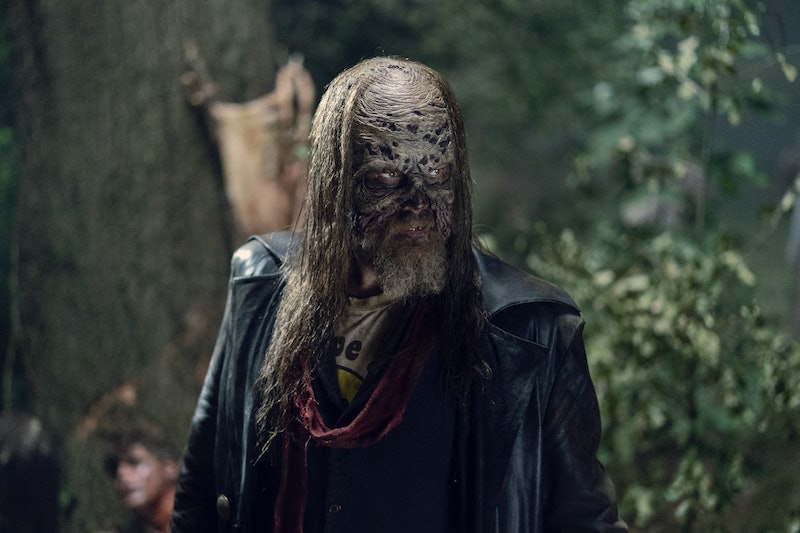 Beware: Beta is back on this week's The Walking Dead and he might be looking for a fight. This new Walking Dead Season 9 clip teases a Daryl and Beta showdown that should leave fans rather concerned for their favorite motorcycle riding archer. Not to mention, very scared of this new mask-wearing fan favorite from the comic that is good at blending in.

That's exactly where we find the trench-coat rockin' behemoth that is Beta (Sons of Anarchy's Ryan Hurst) in this scene from the upcoming March 10 episode. In his very well-made zombie mask, Alpha's partner in crime in the Whisperers walks among the undead only to meet up with Daryl (Norman Reedus), who's on his own mission to help Lydia, Alpha's daughter.

"Spread out," Beta drawls to the other that have been sent by Alpha (Samantha Morton) to retrieve what belongs to her. It won't be easy though with a marksman like Daryl who seems suspicious of this particular group of walkers. Is it because he sees Beta looking him from below, so aware of what he's done? After all, the Walkers don't really have that kind of awareness do they?

Of course, before you can tell what Daryl is thinking or perhaps planning for this herd below, the scene cuts out. Yep, you're gonna have to watch The Walking Dead this week to find out what happens next.

What we do know about Beta, though, he's not one to be trifled with. In a recent interview with Entertainment Weekly, Hurst compared Beta to Javier Bardem's character Anton Chigurh from No Country for Old Men, who was a natural born killer.

"The guy’s sort of impenetrable because he’s just not playing by the same set of rules as anybody else," Hurst said of Beta. "And more so than a lot of characters on the show, like his sense of humanity is so completely and totally fractured that he lives underneath this mask."

In The Walking Dead graphic novels, Beta is a loyal follower of Alpha's cause, which is much different than the Alexandria group. (Beta was also an NBA basketball player turned actor who really hates Negan.) The Whisperers are living amongst the dead, quite literally wearing masks of the roamers they've killed. The Whisperers are not interested in rebuilding the world, but happy to live in this failing one.

In the aforementioned EW interview, Hurst teased that Beta will be a bit of a mystery to fans, but there's a connection between him and Daryl. "They see that they’re very similar and very different at the same time, but that they’re worthy adversaries," Hurst said. "It’s probably one of the first worthy adversaries that the show has presented to Norman’s character because he’s just such a unique badass."

As is Beta, who Hurst told EW will begin to show himself throughout this season where he'll be put in "some really badass scenarios." That's to say Daryl might not be his only adversary in upcoming episode.

So don't shed a tear for Daryl just yet, but definitely keep an eye out for Beta who might just be hiding among the walkers.