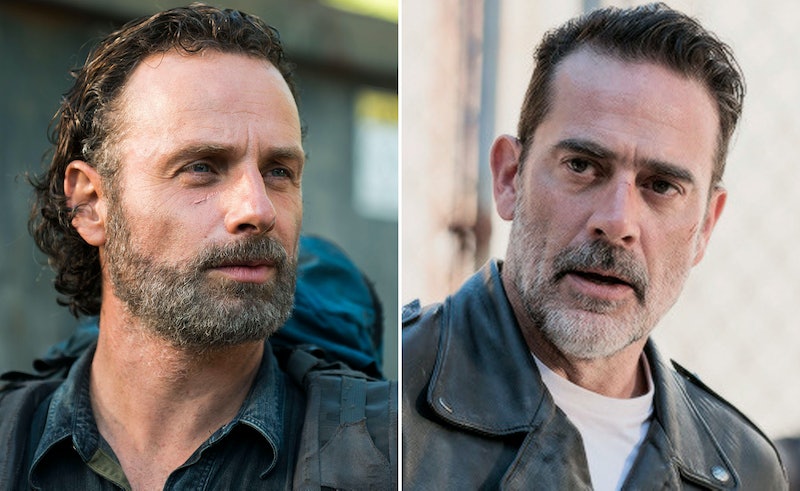 There are so many changes coming for The Walking Dead in its ninth season that you wouldn't think a mere haircut would get people talking. But you'd be wrong. Walking Dead conspiracy theories have been going off on Twitter thanks to Jeffrey Dean Morgan. You see, the actor behind Rick's nemesis, Negan, has a new haircut and fans are convinced this teeny detail has something to do with what's in store for Series 9 — and they don't think it's not good news for the Saviours' leader. But, with Andrew Lincoln definitely departing the show and Lauren Cohen also expected to leave, would they really kill off Negan?

To recap: The Walking Dead Season 8 left off with Rick (Lincoln) deciding that — after a few years of trying — he wasn't going to murder Negan (Morgan) after all, because to do so would be going against his son Carl's (Chandler Riggs) dying wish. The young lad was desperate for the pair to bury the hatchet before he died —  you know, despite the fact that Negan brutally murdered his pals Glen and Abraham with a baseball bat covered in barbwire right in front of him. Let bygones be bygones, eh?

Soz Carl, but I can understand why your dad was a bit hesitant with this one.

Instead of killing Negan, Rick decided to merely slash his throat (as you do) and keep him prisoner back at the Hilltop, explaining to his fellow Alexandrians his hopes of building a better world, where the pursuit of justice isn't automatically conflated with execution.

Needless to say, these plans didn't go down all that well with the likes of Maggie (Cohan) and Daryl (Norman Reedus), who vowed to prove Rick wrong and launch — what I can only assume — some kind of mutinous attack on their leader and his better half Michonne (Danai Gurira) next season. Oh dear.

So, yeah, that's where The Walking Dead is picking up from as it moves into Season 9. Negan should be looking pretty messy and shaggy after all that time locked up, right? Except, he doesn't. And that's why Morgan's new look has fans all confused. Despite the fact he's midway through filming the new series, the actor is sporting a neat beard and a buzz cut.

You can check out his new 'do below:

So, what does it mean? Well, according to a fair few The Walking Dead fans on Twitter, this is a sign that Negan is going to be killed off.

I know, I don't like the sound of this either. But check out the tweets:

If Negan were to be killed off, would Rick be the one to do it? I mean, he did slit his throat and vow to murder him, so he is a pretty likely suspect. Plus he kinda blamed Negan for Carl's death. But, if he were to do so, going against his dying son's last wish would be the ultimate betrayal. Deep, huh?

However, unlike Lincoln and Cohen, Morgan hasn't given us reason to think he's leaving the show any time soon. Nothing has been announced. So is it really likely he'd get killed off? Erm... yeah. When Glen and Abraham were brutally murdered, both Steven Yeun and Michael Cudlitz kept the fact that they were leaving the show a huge secret. So it is definitely possible.

But could the original comic book series provide us with a little more information? Well, just like the TV series, in Robert Kirkman's The Walking Dead graphic novels, Negan is taken prisoner at the Hilltop following the end of the all-out war too. If such consistency with the comic storyline continues in The Walking Dead Season 9, fans would see — spoiler alert — Negan save Rick's life and team up with him to take down a very terrifying new threat. Oh the possibilities.

Of course, The Walking Dead TV series hasn't always followed the exact storylines of the comic books. So the show could really head in any direction. I guess we'll have to wait and see.

The Walking Dead Season 9 returns to FOX in the UK later this year.