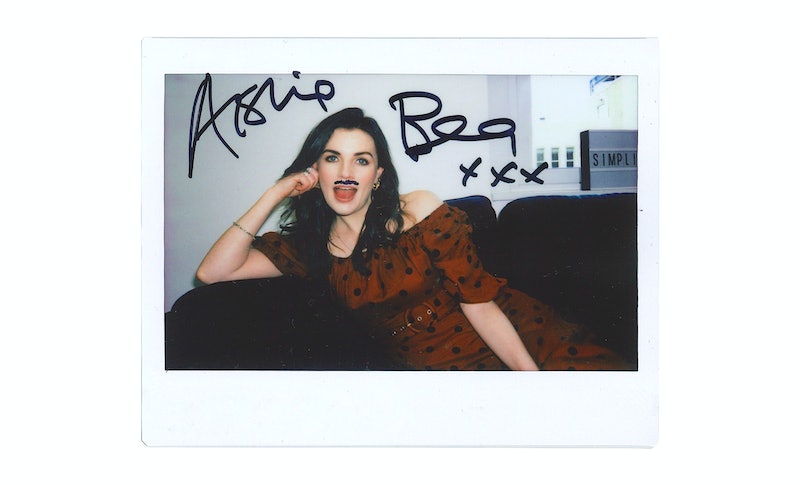 When celebrities hang out with Bustle editors, we want to give them the chance to leave their mark. Literally. So we hand them a pen, a piece of paper, a few questions, and ask them to get creative. This time, This Way Up star Aisling Bea is leaving her mark in the Bustle Booth.

"Is she... is she fixed?" Shona (Sharon Horgan) asks an attendant at the rehab facility where she's picking up her sister Aine (Aisling Bea) after a stay for a "teeny little nervous breakdown." Her query kicks off the first episode of Hulu's This Way Up, which was created and written by Bea and executive produced with Catastrophe's Horgan, and the question turns out to be an intentionally rhetorical one.

Why does Aine crack jokes and lip sync in her underwear for her sister one moment, and then collapse into sobs under the sink the next? When Bea sits down with Bustle, she emphasizes that searching for that answer in her show isn't the point.

"I didn't want any diagnosis or 'what happened' because there is no what happened for anyone," the Irish comedian and actress tells Bustle of how she crafted her protagonist, adding that she deliberately steered clear of therapy scenes except for one in the season's final moment. "To stay better, to stay healthy, is a holistic thing... I think people, when they start [diagnosing] characters, you make them a lot less complex."

There is no mission statement in This Way Up about what it means to be depressed, to be an addict, or to be anything that might warrant a stint in a rehab facility. Instead, Aine's mental health struggles are depicted both comedically and seriously through how they affect her relationships with her family, friends, and co-workers as she navigates life four months post-rehab. That she happens to be funny, alternately to the amusement and chagrin of those around her, isn't a defense mechanism so much as a part of what makes Aine herself.

"I hate the idea that it's tears of a clown, [or] 'What are they hiding?'" Bea says, bristling at the suggestion that her character's sense of humor is a defense mechanism she uses to appear happy and functional during low times. "It’s like no, [she's] not hiding anything, it’s a part of your personality. Just because your arm’s broke, you don’t lose your leg, do you know what I mean?"

The relationship between comedy and tragedy is a topic Bea has discussed before, most movingly and explicitly in a 2017 article for The Guardian in which she wrote about her father's death when she was three, which she later learned was a suicide. "If you hadn’t died, I probably wouldn’t have been mad enough to become a clown for a living," Bea wrote. That nod to circumstance, lest you think she's suggesting she's funny because of or only to mask her pain, is followed up with a balancing gut punch: "I am your daughter and I am really f*cking funny, just like you."

Although This Way Up and Bea's slew of film roles, stand-up specials, and panel show appearances are evidence enough of her talent, when Bea visits Bustle's offices, it's eminently clear that she is indeed f*cking funny. She's quick to make her obsession with Love Island the topic of discussion, deftly demonstrating the various regional UK accents of the Islanders in a cavalcade of comedic impressions, and mischievously draws a mustache on her own photo with the Sharpie meant to sign her Bustle Booth despite the protests of nearly everyone around her.

After a rousing Love Island discussion, it's no surprise that Bea admits in all caps in her Bustle Booth questionnaire that reality TV is "COCAINE." Check out the rest of her amusing answers below.

More like this
On 'Industry,' Marisa Abela Takes Control
By Morgan Leigh Davies
Tacos Are Chef Kay Kay’s True Love Language
By Maxine Harrison
Netflix Reveals First Look At Wednesday In The 'Addams Family' Spinoff Series
By Bustle Editors
Who Plays Trent In 'Never Have I Ever'? Benjamin Norris Calls His Character A “Himbo Stoner”
By Grace Wehniainen and Radhika Menon
Get Even More From Bustle — Sign Up For The Newsletter