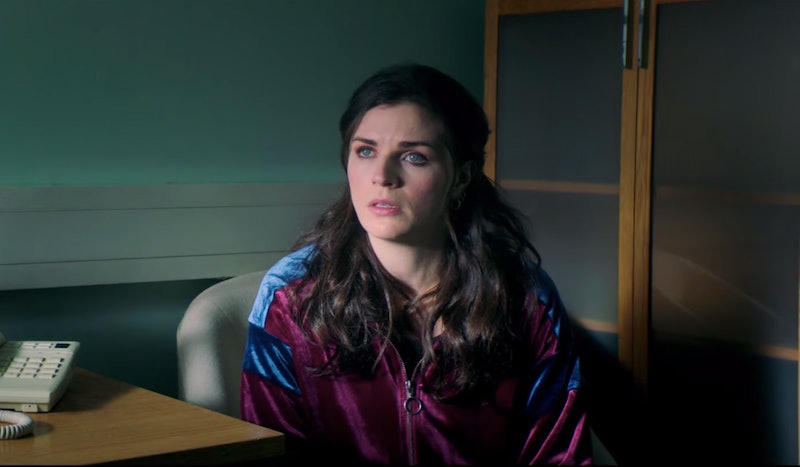 Hulu's freshly released British dramedy, This Way Up, follows Aine (series creator Aisling Bea), an ESL teacher who's straight out of rehab and living with her sister, Shona (Sharon Horgan). From the looks of the trailer, it seems like the perfect new show for fans missing Fleabag. But unfortunately, its future is a lot less certain, as it's not yet clear if This Way Up will return for Season 2.

The series originally premiered Aug. 8 on Channel 4 in the UK, where it's been widely praised. And so far, U.S. critics seem to like it too. Considering the show only just came out this month, it's probably too just soon for any renewal news, but things seem promising.

Similar to the much beloved Fleabag, the sisters in This Way Up have a penchant for both cracking each other up and putting each other down. "Where did you get that?" Aine asks her sister in the trailer, referring to Shona's tight mesh dress. "Forever 21," she responds defensively. "Well that's a bit of an irony if I ever heard it," her sister shoots back.

But also like Fleabag, underneath all that biting humor is a thoughtful exploration of mental health, something Aine is still very much confronting. "You've got a fire in you," a woman (likely her therapist) says in the trailer. "And you can use that to heat yourself up, or you can use that to burn yourself and everyone else around you down."

If This Way Up's future is as bright as it seems like it is, you'll definitely want to know more about the cast bringing its story to life — but as it so happens, you've probably already seen them before.

Sharon Horgan co-created the British comedy Catastrophe alongside Rob Delaney. In the show, she played a character (also named Sharon) who shacked up with an American guy (Delaney) for a week, got pregnant, and decided to see where things went. Horgan also created the shows Divorce, Motherland, and Women on the Verge, and appeared in the 2018 comedy Game Night.

Though Indira Varma plays a woman named Charlotte in This Way Up, her most high-profile role so far is Ellaria Sand in Game of Thrones. She's also been in Bride & Prejudice, Rome, and Luther, among others, and will appear in Amazon's soon-to-be-released Carnival Row.

Tobias Menzies was also in Game of Thrones (as the Starks' bumbling uncle, Edmure Tully) but had a bigger role in the Starz period drama Outlander, where he played both Frank and Jack Randall. In This Way Up, he plays a character named Robert — an Englishman whose son Aine tutors. Menzies is also next set to portray Prince Phillip in the upcoming season of The Crown.

Kadiff Kirwan, who plays Bradley in This Way Up, has also had small roles in Detective Pikachu, Mary Queen of Scotts, and Fleabag. In the 2016 Black Mirror episode, "Nosedive," Kirwan played a character named Chester, whose social cache became dangerously low after getting dumped.

'A Series of Unfortunate Events'

Aasif Mandvi has been in everything from Detective Pikachu to The Proposal. Recently, he also played Uncle Monty in Netflix's remake of A Series of Unfortunate Events. In This Way Up, he plays Shona's boyfriend, Vish.

Chris Geere is most recognizable as the narcissist author Jimmy Shive-Overly from FX's You're the Worst. In This Way Up, he portrays a character named Freddie.

Hopefully this stellar cast will be brought back together again for This Way Up Season 2.

More like this
Ava DuVernay Thought The 'Queen Sugar' Series Finale Felt “Really Satisfying”
By Brad Witter
Will 'The Walking Dead' Return For Season 12?
By Grace Wehniainen
Patrick Dempsey Explained Why Playing McDreamy Was Frustrating
By Grace Wehniainen
'Bridgerton' S3 Teases Exciting Social Season For Penelope Featherington
By Bustle
Get Even More From Bustle — Sign Up For The Newsletter