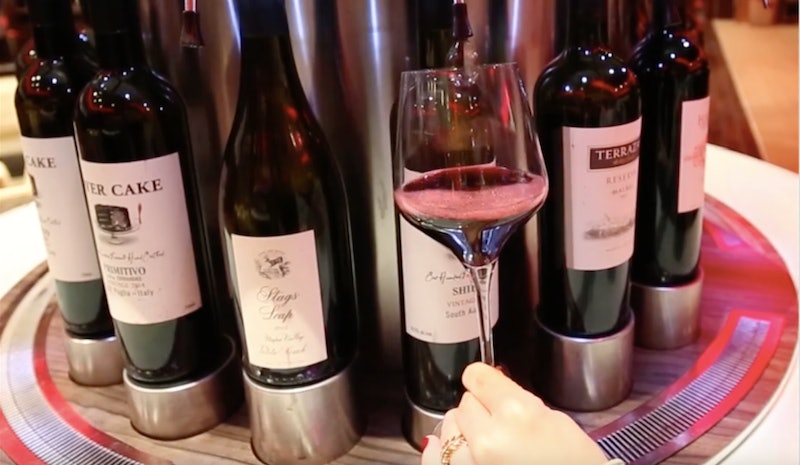 Every so often, you hear tell of an invention so perfectly tailored to your life, you wonder if you accidentally created, patented, and marketed it in your sleep. Such is the case with one Las Vegas bar's Wine ATM, which invites connoisseurs to pour their own wine from the tap. If anyone needs to get me a (very) belated birthday gift, do contact the Wine ATM's manufacturers and have one hand-delivered to my apartment, please and thank you.

Insider Kitchen video-profiled the Hostile Grape at M Resort Spa Casino on South Las Vegas Boulevard, home to the aforementioned Wine ATM magnificence. The ATM boasts 160 wines on tap, including basically every kind of white and red ever invented. According to Yelp users, the ATM works like any vending machine — first, you pre-load a certain amount of cash on a special debit card, which you can use at any of the wine taps. Then, you choose preferred type of wine — the prices are advertised on the machines — push a button, and let the good times and good merlot roll. If you'd like to sample several small glasses of wine, since there are so many on offer (or, if you'd like a GIANT one) each machine offers three different types of pours, so you can choose your size at will.

Here's the machine in action:

A few years ago, everyone in New York City was freaking out about a cupcake ATM that popped up outside a Sprinkles cupcake on the Upper East Side (Sprinkles also has them outside locations in Los Angeles, and elsewhere). Though, obviously, one could just go inside the store to order a cupcake or 7, there is something inherently satisfying about sticking a card into a machine and getting your preferred treat. You don't have to talk to a person, for one thing, and the transaction feels very autonomous. You put your card in, you choose your cupcake/wine/bitcoin, and no one can judge you for, say, liking lime-flavored frosting or extra-sweet Riesling. NOT A ONE.

And while I appreciate a good cupcake as much as the next person, the wine ATM is 100 percent more my speed. When I was in college, I used to use the soda fountains in the dining hall to mix root beer with Dr. Pepper. You see, I enjoyed the taste of root beer, but I needed Dr. P's good old caffeine to get me through, say, a two-hour Medieval History lecture on Charlemagne's reign, or any philosophy class, and the combination of the two fully succeeded in the taste/energy dichotomy. Of course, it took a little time to figure out the exact measurements of each soda needed to create a perfect Pep Beer blend — too much Dr. P, and you had a cinnamon-y disaster. Too much root beer, and I'd pass out right as the professor droned on about Liebniz's moral values. Thankfully, the soda fountain was self-service, and I could experiment as much as I wanted.

Anyway, the point of that very long story is that this Wine ATM is JUST LIKE my magic caffeine-dispensing soda fountain, except that instead of unwisely mixing soda, you can unwisely mix anything, provided that anything is wine-related. Want a merlot noir? You got it! A pinot cab? All yours! A shirsling? Indeed! The world is your wine-mixing oyster, and though your taste buds certainly will not thank me for this advice, at least you'll be exercising your creativity.

And for folks complaining that this is a wine VENDING machine, not a wine ATM, an ATM is technically a vending machine that dispenses money, so I'm not really sure there's a difference here, except, of course, wine > money.