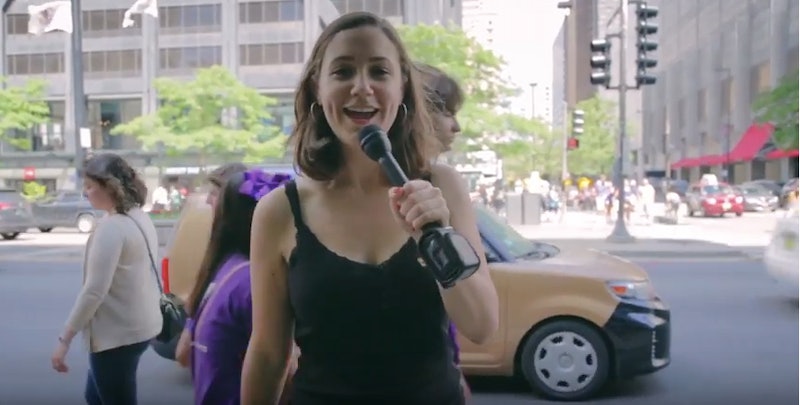 Being cheated on is an awful feeling — at least in my experience it was. And people have a lot of different ways of coping. You may need to rethink your relationship and, rebuild trust, and in some cases, rebuild your confidence. “Discovering your partner has been unfaithful is a terrible blow — it changes your whole set of expectations and beliefs about your relationship,” Tina B. Tessina, PhD (aka "Dr. Romance"), psychotherapist, and author of The Commuter Marriage: Keep Your Relationship Close While You’re Far Apart, tells Bustle. “Suddenly, you have a whole set of questions you may not have ever thought of before. Why didn't I know? Did my partner ever love me? How can I ever trust my partner again? Can our relationship survive this?”

But once you decide what to do with your relationship, you need to figure out how you can move on — and that's no easy feat. But here is someone tackling the issue in a totally different way. Comedian Catharine Savage took to the streets in a new video called "CHICAGO THERAPY: “Help! My boyfriend cheated on me!”. Basically, after finding out that her boyfriend had been cheating, she wanted to find a way to move on. But, as she says, therapy is expensive. So why not find another way to get that catharsis?

"I wanted to combat that stigma and just call it out publicly."

"I think so often there is shame around being cheated on, and I for sure felt the temptation to hide in a state of humiliation," Savage tells Bustle. "So I wanted to combat that stigma and just call it out publicly. It's such a common experience and I figured that if I just talked to people I would feel a little more back to normal and might even get some good advice from people who have been through something similar."

And the way she chose to move on was asking the people of Chicago for advice on how to get over being cheated on in a video (You can can check out the full video here). And there answers were... well, let's call them a mixed bag.

Here's what the people of Chicago had to say.