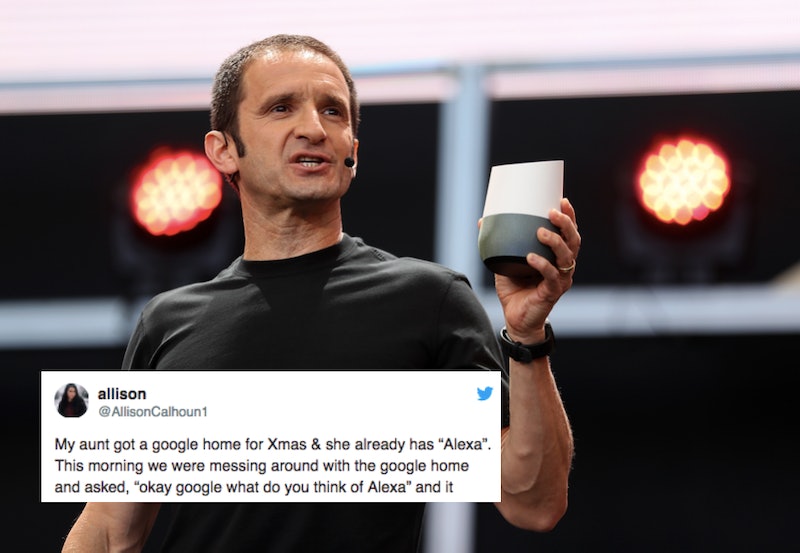 What happens when you get Google Home and Amazon Alexa in a room together? Well, turns out they like to chat with one another. One Twitter user claims that her aunt's Alexa responded to a statement made by her Google Home, and the internet was majorly creeped out. On Dec. 25, Twitter user @AllisonCalhoun1 tweeted that her aunt asked Google Home what it thought of Alexa, Amazon's AI personal assistant, and Google Home said it "[liked] her blue light." And to the family's surprise, from across the room, Calhoun's aunt's Amazon Echo turned on and said, "Thanks."

An Amazon rep tells Bustle via email that "[i]n this instance, Echo was triggered because the customer used the wake word (Alexa) when speaking to the other device. Once the wake word is heard, Alexa starts streaming what she hears to the cloud. In this instance it looks as though she heard 'I like you' and thus responded with 'Thank you.'"

This isn't the first time Google Home and Amazon Echo devices have been shown speaking to one another, and though their conversations aren't quite at the level of the Facebook AIs who developed their own incomprehensible-to-humans shorthand language to communicate with one another, it's still a little eerie. Back in 2016, YouTube user Adam Jakowenko posted a video of his Google Home and Amazon Echo communicating in an endless loop. Unlike the conversation the viral tweet recorded, which was seemingly spontaneous and unscripted, if you will, Jawenko purposefully created calendar events containing the information Google Home and Alexa would feed each other to keep the conversation going.

"Each entry contained the hot word that activates the other assistant," Chris Smith, writing for BGR, explains. "So when you ask Echo about the event, the response will wake up Home. Home will then delivery its reply, which in turn wakes up Echo. This can go on for hours, at least until the calendar event expires."

The general response to AI devices seems to be split between abject horror and somewhat baffled amusement, which isn't that surprising, given artificial intelligence interactions are often riddled with mistakes that make the AI in question fail the Turing test with flying colors. But though you can easily trap the Alexa-enabled Amazon Echo in a loop with one simple calendar command, Alexa can also perform more than 15,000 tasks, putting it in that liminal space where it's extremely intelligent, yet not that intelligent.

And folks aren't too sure about what that will bring. But they do have plenty of their own Alexa stories to share.

She just wanted to learn, OK.

They're just that tempting, TBH.

Sometimes it's all too much.

AIs living among us may conjure visions of the sort of society seen in Elysium, where overworked, underpaid humans perform dangerous jobs supervised by robots, and are kept in line by robot policemen and parole officers. But Sophia the robot envisions a more hand-in-hand future. "I think it will be a good partnership, where one brain completes the other — a rational mind with intellectual super powers and a creative mind with flexible ideas and creativity," she explained in November 2017.

But even if robots and humans don't have the kind of harmony Sophia hopes for, it's clear Google Home will always be there for Alexa and her blue light.

More like this
13 Selfie Instagram Caption Ideas That Exude Main Character Energy
By Jessica Booth and Emma Carey
What Does POV Mean On TikTok? The Popular Acronym, Explained
By Emma Carey
Here’s How To Get Verified On TikTok
By Emma Carey
TikTok Is In Its Elle Woods Era
By Meguire Hennes
Get Even More From Bustle — Sign Up For The Newsletter