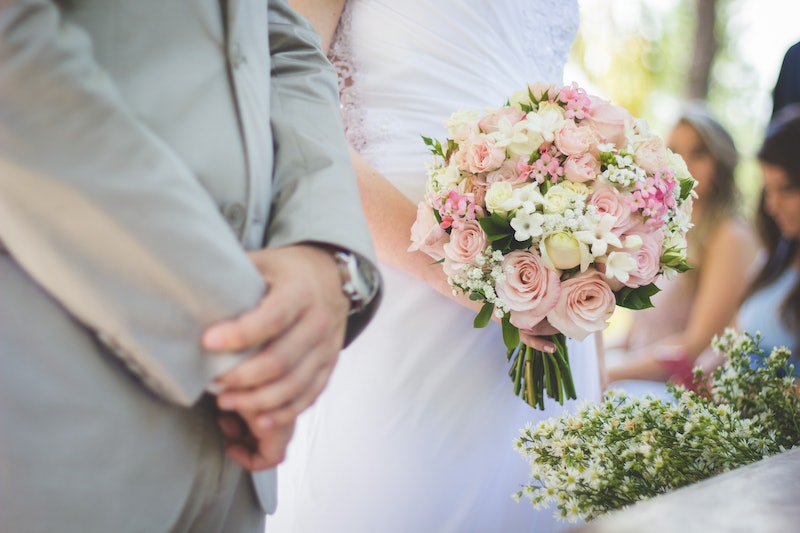 Ever balk at the cost of wedding dress? One Nebraska woman feels your pain. Dawnetta Hawkins made headlines this week after she lent her wedding dress to other women in need, bringing a new meaning to the term 'something borrowed'. According to the Associated Press, Heinz started sharing her dress with women who couldn't afford dresses of their own in August, and has already had to establish a waiting list of eight women for it. The fact that the concept is considered a sensation indicates just how wedded, so to speak, contemporary bridal culture is to the idea of new dresses, but it hasn't always been this way.

Heinz told AP that she “can’t wait to see how far this dress goes,” and it's already been used in at least one wedding. But the real surprise, the more you think about it, is why this isn't more common. People like Heinz, who bought her dress on sale for $550, are capable of spending large proportions of their budget on a gown, while others aren't. So why isn't sustainability and the eco-consciousness of a recycled gown (or suit, or both) a more prominent talking point in American and European bridal culture? What's stopping us from making it our "something borrowed"? The answer lies in the history of the wedding gown itself, and the cultural traditions that have held sway since the 19th century.

I wore a second-hand gown for my own wedding, though it wasn't technically a wedding gown in its first incarnation at all. It was a vintage Balmain made for the Parisian socialite Suzy Volterra in 1953, and had likely been used for a night out at the Folies Bergère, the nightclub she owned; there's still a cigarette burn in the hem. And that vintage confection earned its share of confusion: relatives couldn't believe I was wearing somebody else's dress to be married, despite the fact that the original owner was a) long dead and b) fabulous. This idea of originality and custom-made wedding gowns is, as it happens, actually a fairly recent part of European bridal culture.

For much of European history up until the 19th century, brides who weren't of the upper classes simply wore their best dresses for their wedding days, as they couldn't afford to buy an entirely new trousseau. While wealthy brides (and grooms) used their wedding days as an opportunity to show off their riches, like Lucas Cranach the Elder's bride in the portrait above, it wasn't regarded as problematic for women of lower status to wear gowns already in their wardrobes, in many different colors and patterns. (The "something blue" of modern tradition is actually a reference to a common wedding-dress color before the trend for white; blue was often a reference to the Virgin Mary for Christian brides, and thought to be good luck.)

Part of the shift away from this habit in Western fashion has to do with the increasing fashionability of white dresses. They became de rigeur for most brides in England and beyond during the reign of Queen Victoria, who famously wore white to wed Prince Albert in 1840, and became synonymous with virginity and purity. But white dresses were often not part of women's standard wardrobes (high society British women might have a white gown to be presented at court, but white was otherwise impractical), and so often had to be custom-made. Wedding gowns of more luxurious materials, like silk, also became more affordable to European brides in the 19th century as textile production and dyeing technologies improved.

However, women in the period often didn't leave their wedding dresses in the closet once they'd been wed. They were worn again, repurposed and altered; Queen Victoria wore lace from her own wedding gown for her outfit at her Diamond Jubilee in 1897, and that wasn't considered remarkable. Sharing and handing down wedding gowns was also common; dresses were expensive, as factory-made fashion didn't yet exist. Altering a relative's dress to fit current fashions and your own tastes and wearing it down the aisle wasn't abnormal. By contrast, an American bride in 2015 who chose to wear a 120-year-old heirloom dress made headlines.

Discussions on wedding site threads around the internet reveal hesitation about wearing previously-worn gowns; the idea that a gown must be unique, special and carry meaning for one bride alone is a very modern idea, but it's an incredibly strong one. Does the gown of other brides carry their own luck and marital misfortunes? Does it lessen the psychological "specialness" of the day? The curated idea of weddings as ultimate expressions of romantic feeling and individual personality flows through our culture like a river, from magazines to films. But in some cases, the reality of cost and difficulty can smack strongly against what is, to all intents and purposes, a very modern myth.

Borrowing a gown shouldn't be a big deal; a gown can share luck, wonder and love among several brides easily. And the elaborate nature of many wedding dresses means that they won't be worn again, even in altered form — so isn't a life among other people in love a good way to give it extra chapters? My own dress won't be lent out — at over 70 years old, it barely survived my own wedding day (and suffered a large rip and damage to beading), and will likely be donated to a fashion museum — but if your gown is just sitting pristinely in a closet, consider letting it have another life among those less fortunate.