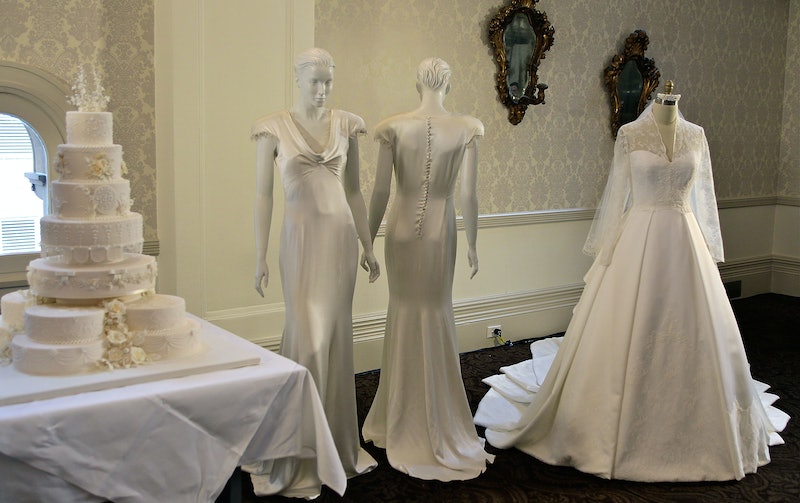 Wedding ceremonies have existed in many cultures for centuries, but the Western wedding gown as we know it — white and once-in-a-lifetime extravagant — hasn't always been the norm for brides. Far from it. For one, the white wedding gown is a modern invention: It's only about 180 years old. Here's how the white wedding gown — and the veil, bouquet, garter and more wedding traditions— came to be.

Why do brides wear white?

You can blame Queen Victoria for the white wedding dress. She wore plain white to marry Prince Albert in 1840, and sparked a trend that's lasted to this day — but, surprisingly, she didn't wear it to symbolize purity or virginity. She just wore it because, well, she liked white.

The connotations of virginity we know so well today only really appeared later in her reign, as the sentimental Victorians idolized innocent brides and their pure white gowns. "It is an emblem of the purity and innocence of girlhood, and the unsullied heart she now yields to the chosen one," said the Godey's Lady's Book (a bit sickeningly) a decade later.

Before Queen Victoria's history-making royal gown, brides wore any nice dress they had. The color white, however, was pretty unattainable for commoners for much of European history, because white was a) expensive and b) difficult to keep clean. White wedding gowns were rare and confined to the wealthy, which of course, made them cooler.

For French royals, white was actually the colour of mourning — hence Mary Queen of Scots' wedding gown faux pas. She caused a scandal when she wore her favorite white gown in 1558 to marry the Dauphin of France, but instead of copying her, people just tutted about her impropriety. When her husband died two years later (after having a hole drilled in his head to relieve an ailment — yeesh), the white wedding dress was accused of cursing him.

Indeed, one theory about Queen Elizabeth I, the Virgin Queen, suggests that she often wore white in paintings because she was supposedly 'in mourning' for an early suitor who'd died. The white meant "I am deeply sad about that dead dude, princes, so please buzz off and stop proposing to me."

What did brides wear before white?

So with white off the menu until Victorian times, what did brides often wear instead? Something blue, of course. Blue was associated with the Virgin Mary, so it meant purity, and more importantly, it didn't show stains.

That said, back in the day, wedding gowns could be almost any color or style, depending on where you came from. The early Celts liked red wedding dresses because they signified fertility, and you wore black if you were marrying a widower or your last husband had died (which happened a lot). Poorer brides wore their best church dresses, which were sometimes — gasp! — patterned.

There's even a rhyme from the mid-1800s recorded in the Farmer's Almanac, around the time Victoria rejected showed up in white satin:

And so the trend had begun.

The veil and train of a modern gown seem to have originated in Roman times. Roman brides were usually swaddled head to toe in a gigantic flame-coloured veil called the flammeum, to scare off evil spirits. Yep, it was genuinely meant to make them look as if they were on fire. That's one hell of a deterrent.

The veil and train also prevented them running away — a genuine concern — and allowed them to be easily transported to their new bridegroom, who often had never seen their face before it was unveiled at the ceremony. Essentially, it was a demon-scaring, theatrical marital straitjacket. Romantic, huh?

Bouquets seem fairly straightforward, right? Pretty flowers, maybe a ribbon, and we're done. Not so fast — they haven't always been so pretty, or so sweet-smelling.

Brides have often been draped and embroidered with decidedly unromantic flora, for the sake of their souls and fertility. Garlic was a popular way to ward off bad spirits in medieval Europe, as was dill. (Not so coincidentally, they were also thought to be good at preventing the plague.) The strong smell concealed body odor, which was convenient, as deodorant wouldn't be invented for a few more hundred years.

Middle Ages brides carried wheat, while Victorian brides preferred ivy; both embroidered on their gowns and, weirdly, living — they'd wear it, then plant it and give bits to daughters for their own weddings.

Even as technologies developed and fake flowers come into fashion, they still weren't fun. In the 1830s, new, fancy wax orange blossom on the head and dress were preferred to real ones, symbolising fidelity — but, as Edwina Ehrmans points out in her book The Wedding Dress , melting ensued:

[A book on wax modelling] drew attention to the problem of wax flowers wilting in the heat of crowded rooms and sticking to the hair.

The tradition of the garter seems faintly innocuous. A bit weird, removing a garter with teeth for luck and throwing it to the crowd, but surely innocent? Unfortunately not. The garter actually evolved from a terrifying tradition that resulted in a near-naked bride.

Brides have always been seen as very good luck, and getting a piece of the wedding attire even more so. A medieval French tradition meant that immediately after they left the altar, brides were rushed by attendees wanting to tear off a bit of her gown for good fortune.

The result? A bride in rags, and probably not too pleased. The garter version, just like the bouquet toss, was devised sometime in history as a way to keep the mob at bay and still let the bride remain fully clothed. You'd think that would be the minimum standard at a wedding, but apparently not.