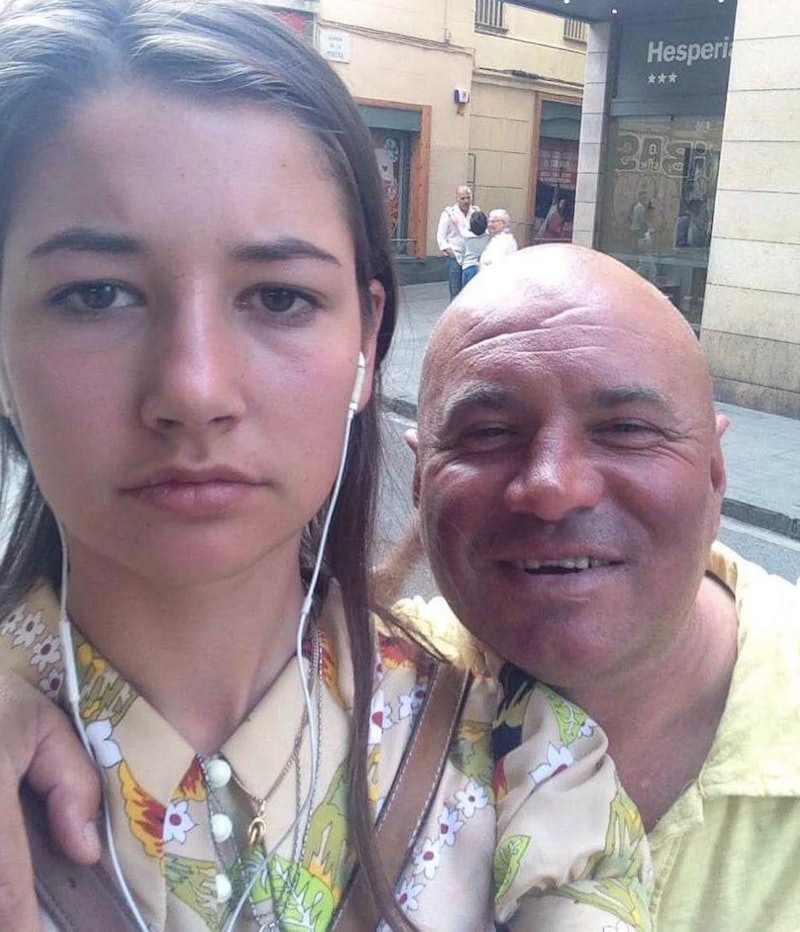 What do you do when someone catcalls you? I, personally, often partake in the Grimace Method™, in which I scowl aggressively at the person and then go tell my feelings to some chicken nuggets. One woman is choosing to fight back with a photo, taking selfies with the men who catcall her.

Noa Jansma is a 20-year-old student from Amsterdam who started the project #DearCatcallers. For an entire month, Jansma took selfies with the people who catcalled her, all of which were men. Then, she posted the selfies on Instagram, sharing some context for the photo and what the men did or said. Each of Jansama’s 24 photos from the month show her standing stoically while then men often smile and pose in the background. “By making the selfie, both the objectifier and the object are assembled in one composition,” Jansma writes in an initial post explaining the project. “Myself, as the object, standing in front of the catcallers represents the reversed power ratio which is caused by this project.”

“This Instagram has the aim to create awareness about the objectification of women in daily life,” Jansma’s opening post also states. “Since many people still don't know how often and in whatever context ‘catcalling’ happens, I'll be showing my catcallers within the period of a month.” Figuring out how to deal with catcallers remains an unfortunate milestone in navigating the world as a woman. Jansma’s photo project shows just how frequent street harassment occurs while also revealing how little those doing the harassing seem to be aware that it’s a problem. As the bio for her Instagram states: Dear Catcallers, it’s not a compliment.

“I know what I would do with you, baby” the caption of one photo reads. Another notes the sounds, hisses, and whistles a different catcaller made at her. One man apparently started singing ‘Wild Thoughts’ to her, and how dare someone invoke the work of our lord and saviour Rihanna in such a heinous way.

Some of the men are alone. Some are in pairs. Others, in groups of three or more. The photos are taken during the day and at night. Jansma’s selfie show her walking on the sidewalk, in restaurants, near construction sites throughout the city. A few photos appear to have been taken in the same day, perhaps not very far apart in time or location. As the Independent reports, Jansma wasn’t able to take a picture of every man who catcalled her as some situations felt too unsafe.

Only one of the men asked Jansma “why” when she requested a selfie. “They're not at all suspicious because they find what they do completely normal,” she told Dutch newspaper Het Parool, which the Independent then translated. Most of the men photographed are smiling gleefully, one even blowing a kiss. A few men have their arm around Jansma, clearly unaware or indifferent to her visible discomfort.

At the end of the month, Jansma asked women around the world to share their experience with catcallers. “My month of posts has ended, but it doesn't mean that catcallers are in the past as well,” Jansma writes. “To show that it's a global phenomenon and that this art-project is not only about me, I'll pass on the account to different girls around the world. This will be a process and it will take time, so please stay tuned.”

In Amsterdam, where Jansma is from, street harassment will be punishable by a 190€ (about $222 U.S.) starting January 1, 2018. Jansma acknowledges the progress but thinks the law will be difficult to impose, according to her interview with Het Parool, calling the new legislation “symbolic, and I think that's good.”

In many places in the U.S., street harassment is already illegal. Remember that viral video of a woman walking around New York for ten hours and getting catcalled? As the Washington Post reported in 2014, New York has disorderly conduct laws meant to prevent and prohibit some of the things that video documents. “Its harassment law bars someone from making alarming or seriously annoying comments to you at least twice,” the Washington Post reports, stating that both are punishable by a $250 fine and/or up to 15 days in jail.

Despite its illegality, catcalling persists. A fine or jail time does little to dissuade street harassment if women don’t feel like they can report it, if women who do report it aren’t taken seriously, if catcallers are not ultimately held responsible for their actions. Legislation is necessary and validating. However, creating a culture in which women feel safe walking down the street will also require sweeping shifts in cultural perception of harassment, misogyny, and women’s autonomy as a whole.